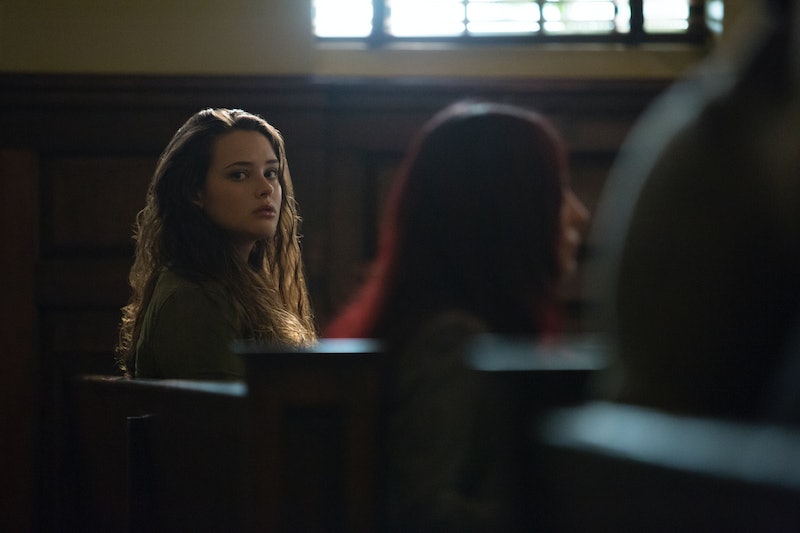 Two years after the show premiered, Netflix has removed the suicide scene in 13 Reasons Why Season 1 from the site, according to Variety. This edit comes two years after the scene was released and three months after a new study found that 13 Reasons Why was linked to an increase in suicides among teens. It also comes before 13 Reasons Why returns for Season 3, set to premiere later this summer. Warning: This article contains information about suicide, which some may find triggering.

In a statement released on Monday, July 15, via 13 Reason Why's official Twitter account, Netflix wrote, "We’ve heard from many young people that 13 Reasons Why encouraged them to start conversations about difficult issues like depression and suicide and get help—often for the first time." However, since its premiere in 2017, there have been many others who have questioned whether the show goes too far, including some mental health organizations and professionals who publicly argued that the depiction of Hannah’s death by suicide was dangerous to younger viewers.

A recent study published in the Journal of the American Academy of Child and Adolescent Psychiatry with support from the National Institutes of Health (NIH), confirmed some of those fears. The study, released on April 29 under the headline "Release of 13 Reasons Why Associated with Increase in Youth Suicide Rates," found that a month after the show was released, there was a nearly 30% increase in suicides among teens in April 2017. Though direct causation was not proven, the study caused alarm among viewers, and it seems, some of the creatives over at Netflix.

In their new statement, Netflix stated that as they "prepare to launch Season 3 later this summer, we’ve been mindful about the ongoing debate around the show. So on the advice of medical experts, including Dr. Christine Moutier, Chief Medical Officer at the American Foundation for Suicide Prevention, we’ve decided with creator Brian Yorkey and the producers to edit the scene in which Hannah takes her own life from season one.”

As of Monday, the graphic scene in the first season's finale, "Tape 7, Side A," has been changed to show Hannah staring at her reflection in the mirror. Instead of showing Hannah taking her own life, the scene now cuts to her parents finding their daughter.

This is not the first time 13 Reasons Why has had to make changes in response to criticism. A month after Season 1 premiered, the show added content warnings before each episode. In Season 2, the series gave viewers more direct access to local helpline numbers and discussion guides at the website 13ReasonsWhy.Info, and created the 13 Reasons Why aftershow Beyond the Reasons, which featured mental health professionals talking about the issues of each episode. That said, this is the first time the show has gone as far to delete or edit a scene, not to mention one that Yorkey, 13 Reasons Why writers, and Netflix's CEO previously defended.

In 2017, Yorkey maintained in an interview with Entertainment Weekly that 13 Reasons Why had a "responsibility" to show just how horrific suicide and other real-life issues can be. In a new statement posted to Twitter on Monday, the showrunner echoed his previous sentiment, explaining that his "creative intent in portraying the ugly, painful reality of suicide in such graphic detail in Season 1 was to tell the truth about the horror of such an act, and make sure no one would ever wish to emulate it."

He added, however, that the concerns of mental health professionals have led him to have a change of heart, saying he "agreed with Netflix to re-edit it. No one scene is more important than the life of the show, and its message that we must take better care of each other." He concluded, "We believe this edit will help the show do the most good for the most people while mitigating any risk for especially vulnerable young viewers.”

As The Hollywood Reporter noted, the decision to remove the scene has gotten support from organizations like the American Association of Suicidology, the American Foundation for Suicide Prevention, the American School Counselor Association, Stanford’s Dr. Helen Hsu, Mental Health America, Cedars-Sinai’s Dr. Rebecca Hedrick, and The Trevor Project.

In a joint statement obtained by Bustle, those organizations said, "There has been much debate about the series in the medical community. But this positive change will ensure that 13 Reasons Why continues to encourage open conversation about mental health and suicide prevention – while also mitigating the risk for the most vulnerable teenage viewers.”

As the show moves into Season 3, no doubt these organizations, along with many others, will be looking to see how 13 Reasons Why continues to tell their story in a way that is still honest, but more sensitive to its young viewers.

More like this
'Stranger Things' Fans Are Begging For Steve To Live For The Funniest Reasons
By Grace Wehniainen
Regé-Jean Page Spoke Out On His Rumoured 'Bridgerton' Return
By El Hunt and Maxine Harrison
'Stranger Things' Season 4 Volume 2 Trailer Teases New Episodes Coming July 1
By Grace Wehniainen and Gabrielle Bondi
Does Umbrella Academy Season 3 Have A Post-Credits Scene? The Answer Will Surprise Fans
By Brad Witter
Get Even More From Bustle — Sign Up For The Newsletter