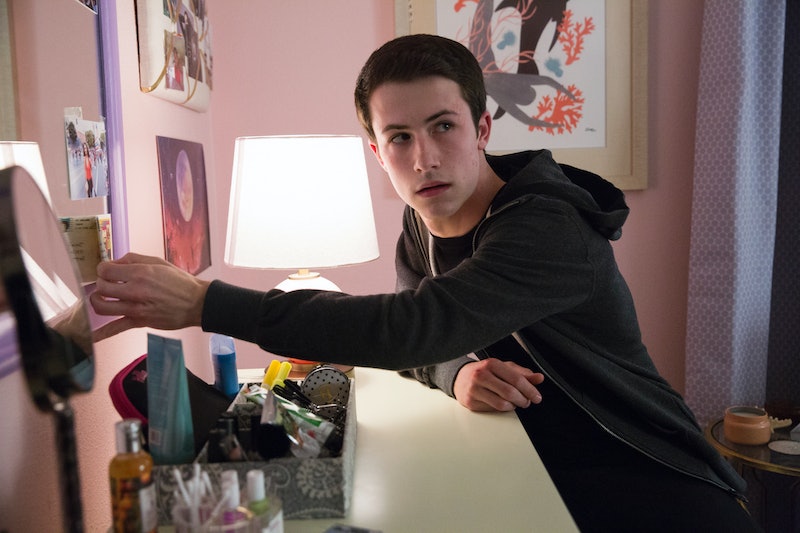 Following Wednesday's official announcement that 13 Reasons Why is returning for another season in 2019, Netflix's CEO Reed Hastings is speaking out about his decision. Specifically, the Netflix CEO is defending his choice to renew 13 Reasons Why amidst backlash from those who think it's unnecessary after the most recent controversial season, according to Deadline.

Hastings reportedly addressed the network's choice to bring back 13 Reasons Why at the annual Netflix shareholder meeting on Thursday, June 7. As Deadline reported, he didn't apologize for renewing the show, which was criticized for doubling down on trauma in its second season, instead of addressing some of the problems of its initial season. After its debut, 13 Reasons Why was called out by some mental health organizations and professionals for its depiction of Hannah’s death by suicide.

"13 Reasons Why has been enormously popular and successful. It’s engaging content,” Hastings reportedly stated at the meeting. “It is controversial. But nobody has to watch it.” While that statement might satisfy the shareholders who are interested in 13 Reasons Why, it doesn't quite feel like an appropriate or supportive response to those who feel the show is doing serious harm to its viewers.

Similarly, this season, 13 Reasons Why even suggested some people don't watch the show in a new intro featuring the show's stars. In the clip which airs before each episode, Alisha Boe, who plays Jessica, tells the audience that "this series may not be right for you," if you're triggered by the show's portrayal of suicide and sexual assault. The new intro also gives viewers access to local helpline numbers and discussion guides at the website 13ReasonsWhy.Info. Providing resources definitely is a positive step, as are the content warnings.

Still, Hasting's statement comes after the Parents Television Council criticized his decision to bring 13 Reasons Why back. The parenting group stated that Netflix could potentially have “the blood of children on their hands” for its depiction of suicide and sexual violence. According to Deadline, the PTC called Hasting's statement "callous," and they started a petition looking for Hastings' and Netflix to reverse their decision. (Bustle reached out to Netflix about this backlash, but did not receive an immediate response.)

Spoilers ahead for Season 2. There are others who agree that the Season 2 finale of 13 Reasons Why went too far with a brutal sexual assault that shows Tyler being sexually assaulted by another male student. Brian Yorkey, the creator of 13 Reasons Why, defended the sexual assault scene, told Vulture it was an "unflinching" look at something very real that viewers don't have to watch. But he said, "we believe that talking about it is so much better than silence.”

The controversy surrounding the latest season had many taking to Twitter to also question why Netflix was bringing 13 Reasons Why back. One person tweeted, "I’m all for 'starting a conversation' but romanticizing suicide isn’t the way to do it. As a person who has battled depression, it has made me on multiple occasions consider suicide as a real option."

Meanwhile, mental health advocate Gabby Frost tweeted, "There's literally a reason the book ends after Hannah kills herself. There's no sequel to the book. Stop milking the show for money and just have Netflix create a new series to actually talk about mental health, suicide, and sexual assault in a responsible way."

Others, though, seemed to take to the same attitude as Hastings: If you don't like the show, just don't watch it. Some on Twitter even suggested not watching the show is how to get Netflix to stop renewing the series. "#13ReasonsWhy has been popular and financially successful. It is controversial," Twitter user @ebysta wrote. "But nobody has to watch it."

Netflix announced Season 3 of 13 Reasons Why with an ominous teaser that didn't give any details of what people can expect from the next season. But, it's likely it will happen without Hannah.

In an interview with Entertainment Weekly, Katherine Langford, who played Hannah, talked about leaving the show behind. "For me, letting Hannah go was in Season 1," she said. "Season 2 was for Clay to let her go." That same day as the EW interview, where it was implied that Hannah Baker won't return to 13 Reasons Why, Langford posted a farewell to Hannah on her Instagram that seemed to also signal she would not be returning to the show.

Whether you're happy about 13 Reasons Why being renewed for another season, it's clear that Hastings isn't apologizing for bringing it back. But like he said, it's your choice whether you watch it when it does.