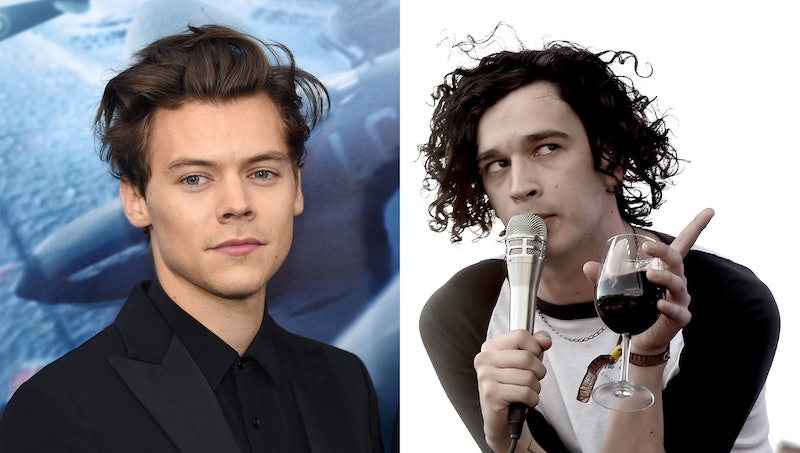 From the day he first emerged, questionable fringe in tow, everyone's wanted a bit of Harry Styles. From Taylor Swift to Timotheé Chalamet, and now The 1975's Matty Healy, it seems like Harry Styles has been the man of the moment, as well as the man to team up with, for almost a decade. While Styles is keeping things lowkey at the moment, the very opposite can be said for The 1975 who are still reeling from their last release, but apparently, they still have time for other projects. Now, The 1975 want to produce Harry Styles' next album.

I was sort of hoping Matty Healy, frontman of one of the world's most audacious bands, The 1975, was in the mood for a romantic encounter when he tweeted: "I need @Harry_Styles new number I’m defo blocked," on Thursday, Jan. 3. I was also hoping I'd find out why Styles had blocked Healy, but unfortunately for me, that's still yet to be discussed. Though, not to anyone's surprise, Styles' number wasn't posted on Twitter — just imagine the chaos that would cause — but Healy did end up admitting to why he needed it so desperately in the first place.

It didn't seem as though Healy ever did get Styles' number, as he tweeted the "Sign of the Times" singer again an hour later: "Hey @Harry_Styles me and George really wanna produce your next album hmu if you wanna it’s cool if not tho I know you’re like super busy etc love!!!!!" The tweet quite rapidly picked up a bunch of high profile endorsements, including from the likes of BBC Radio1, who tweeted: "make it happen, 2019 <3," and the official Twitter Music account who tweeted: "Shoot your shot."

So far, there's been no word from the Styles man himself, but he's not exactly the most prolific tweeter out there. Although, this isn't the first time that talk of a collaboration between Healy and Styles has emerged. Before Styles released his debut, self-titled album, Pop Buzz made a list of all the ways in which his solo detour away from One Direction could have been improved.

There's "one man who can propel Mr Styles out of boyband purgatory and into solo stardom," the music website wrote on March. 27, 2017, "That man's name is Matty Healy." Good call, Pop Buzz, good call. Both boys love their '80s revivalism, their tousled hair, their artpop aesthetic, the website argues. And best of all, Healy really loves Styles.

Allow me to bring back the memory of him making out with a cardboard cutout of Styles in The 1975's video for their 2015 single "Love Me" from the indubitably good (and long titled) I Like It When You Sleep, For You Are So Beautiful Yet So Unaware Of It. The kiss happens around the 40 second mark, as Healy puts his arm around Styles, as a cardboard cutout of Miley Cyrus looks on creepily. Now the the band's record label Dirty Hit, is expanding to the U.S., according to this tweet, maybe Cyrus could be Healy's next recruitment?