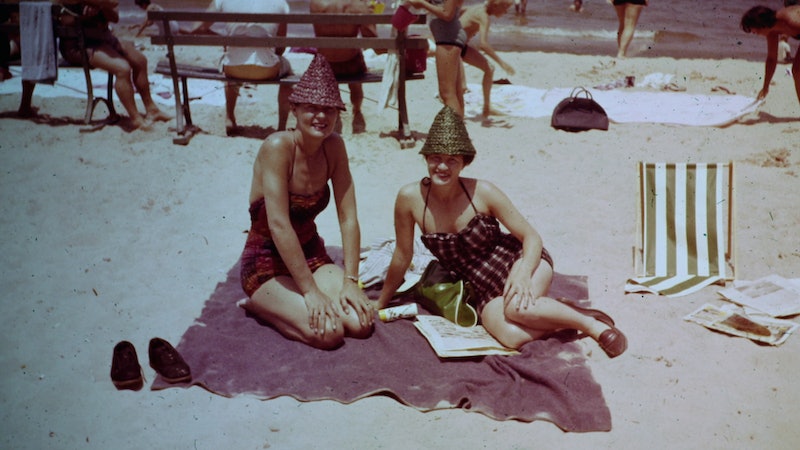 In 2018, TV producer extraordinaire Ryan Murphy signed a massive production deal with Netflix. And so far, his projects for the platform haven't disappointed. The creator of Glee and American Horror Story has churned out new Netflix-only dramas like The Politician and Hollywood, but he's also begun dabbling in documentaries. His second doc for the streaming service focuses on a secret 70-year love story with an unexpected tie to a hit '90s movie. Believe it or not, the A Secret Love stars have a special connection to A League of Their Own.

At first glance, A League of Their Own is your typical sports comedy. It's about a plucky group of underdogs that includes one phenom (Geena Davis) and more than a few wacky characters (Rosie O'Donnell, Madonna, etc.) under the tutelage of a manager who doesn't want to be there (Tom Hanks). Over the course of the film, the team learns to believe in themselves and the manager comes to believe in them, too, as they teach each other about not only sports, but life.

The film was inspired by a true story and offers a fictionalized version of the All-American Girls Professional Baseball League (AAGPBL). During World War II, many American men were overseas fighting the war, including hundreds of professional baseball players. To make up for this loss of talent, then-Chicago Cubs owner Philip K. Wrigley founded a new league in 1943 that featured all-female players. The league's beginnings are dramatized in A League of Their Own, but there was one major aspect of the real AAGPBL that the film completely ignored.

According to Narratively, a number of the league's players were gay, but since homosexuality was not widely accepted in the 1940s, and was even criminalized in many states, this fact was kept secret. It's believed that the anti-LGBT sentiment of the era was the reason for the strict dress code forced upon the players of the AAGPBL which insisted that they keep their hair long and wear skirts and lipstick on the field. As Narratively reports, these measures were put in place to keep the public from perceiving the players as lesbians. But many players were gay, including Terry Donahue, who played catcher for the Peoria Red Wings from 1946 until 1949.

In 1947, Donahue met the love of her life, Pat Henschel, and it is their romance that is profiled in A Secret Love. The pair's relationship began during Donahue's AAGPBL days, but it continued for over 70 years after, not ending until Donahue's death in 2019. But now the couple's story is finally being told in their new documentary, and with it, many fans will learn the secret LGBTQIA history of A League of Their Own, too.

The love affair of Donahue and Henschel, along with countless other lesbian athletes, were completely left out of A League of Their Own. But thanks to A Secret Love, this forgotten piece of sports history is finally getting the attention it deserves.