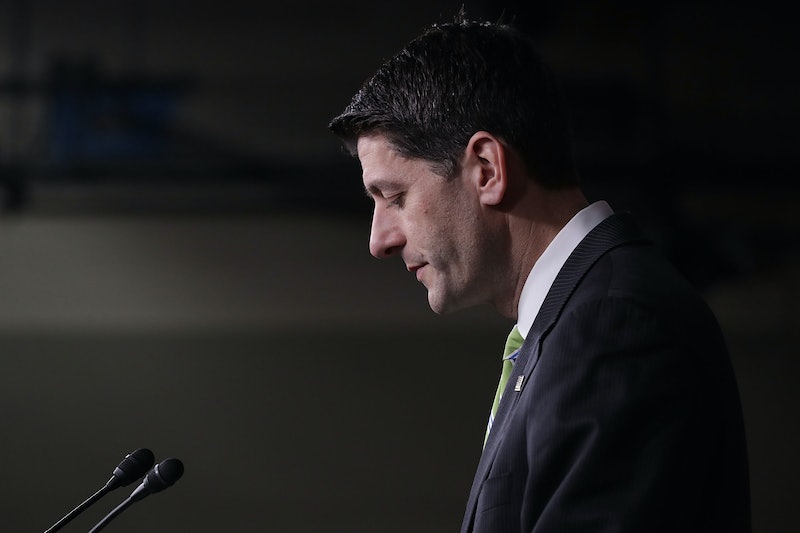 Ding dong, the bill is dead! On Friday, news broke that President Trump had killed the AHCA bill before it even went to the House Of Representatives for a vote, Robert Costa of The Washington Post reported. The vote was scheduled for 3:30 p.m., but was canceled before it could happen.

It's a monumental moment in the healthcare debate; one of President Trump's main campaign promises was that he would repeal and replace Obamacare, and now the GOP's legislation has failed before it even went up for a vote. There's no telling what the next step will be. While Trump said that he would not negotiate further with the GOP if the AHCA failed, we'll have to see what actually happens now.

One thing is for sure: Many people are thrilled that the AHCA has been killed dead in its tracks. As of Friday afternoon, the number one trending topic on Twitter is #KillTheBill. And Twitter users are not disappointing with their usual wealth of pop culture GIF reacts to such a dramatic and victorious turn of events in the embroiled healthcare battle. Some highlights of the Kill The Bill Twitter festivities:

Your bill is fading!

Play it through the vents!

Carlton Dances It Out

It's not unusual to celebrate the failure of the ACHA.

He might be rich, but he still supports Obamacare.

Annalise Keating Pours Herself A Glass

Give her an Oscar for this performance.

Even she is less vain than Donald Trump.

I Wanna Be In The Room Where It Happens

Except there is no room, because the vote isn't happening. Whoops!

Bones Hates To Break It To You, But...

And it ain't coming back.

Let Me Give You A Little Bit Of A Scenario

The AHCA is dead!

I'm Leslie Knope & I Would Never Vote For The AHCA

Treat yourself to some waffles today.

Dumpster fires are seriously having a moment right now.