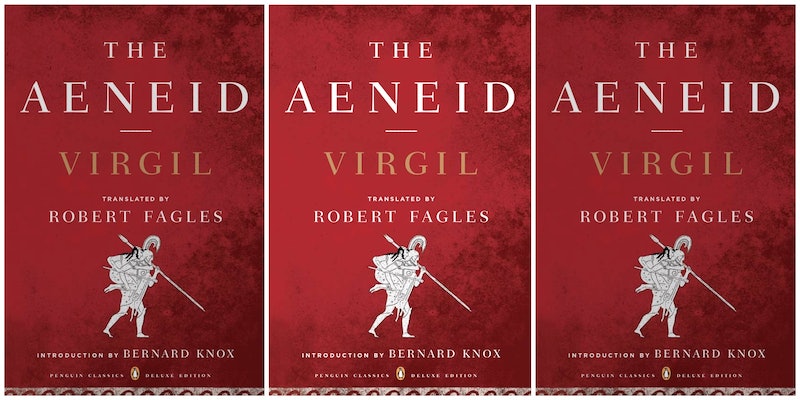 Rome. 29 B.C.E. The Republic has fallen, and Roman politics are a real hot mess. Octavius Caesar — soon to be known as Augustus — has seized control of the empire, after chasing down the senators who stabbed his great-uncle Julius to death. He's also annihilated the military power couple Antony and Cleopatra. But now Augustus has a problem. Some people liked Julius Caesar because of his kickass military prowess and his tax reform plan, but a lot of people were freaked out that he just up and made himself dictator with a golden senate chair. And now lil' Gus Caesar has become supreme Emperor of Rome, based mostly on his family name.

Augustus has promised to return Rome to its former glory, and bring back traditional Roman values. But the Romans are used to electing their leaders, and now they're supposed to just accept an emperor all of a sudden? What gives? Gus has defeated his enemies on the battlefield, but how is he supposed to convince his people that republics are overrated and absolute rulers are totally cool?

The answer, of course, is poetry.

Most Romans are fairly well-versed in classic Greek epics, like Homer's Odyssey and Iliad, which are already pretty dang ancient by 29 B.C.E. Gus needs that but for Rome. He needs a new, Latin epic, that retcons the Romans into the Trojan War, reinforces Roman patriotism, and makes Augustus look like the rightful, sexy, divine ruler of Rome. And if it could have a whole bunch of magic and drama and sick battle action, all the better.

So he commissions a poet named Virgil to write The Aeneid.

Now Virgil has a problem, because no matter what his own political leanings are, there is just no saying "no" to Augustus Caesar. I mean, this is the first emperor of Rome. We're still calling the eighth month of the year "August" after him. Augustus could easily crush Virgil and his family on a whim.

We don't know whether Virgil was already team Augustus, or whether he was just the best poet in the biz, but either way he's now stuck writing the greatest work of propaganda (also known as "fake news") that the world has ever known. He has to rewrite both history and myth to make it all sync up to Gus's vision. So he takes Aeneas, a mega-hot Trojan prince from The Iliad who is also a son of Venus. He makes this dude super pious and beefy, which is very old school Roman. He also renames Aeneas's son from Ilus, which literally means "Troy," to Iulus, which, in Roman naming tradition, would give this kid's descendants the name "Julius."

In Virgil's version of the story, Aeneas is fated to found New Troy, A.K.A. Rome. So after Old Troy is defeated by a giant horse, Aeneas goes running around the Mediterranean, Odysseus-style, fighting and hooking up with sexy babes (but like, in a pious way) until he reaches Italy. There he fights some more battles and settles down with a sexy Latin babe and founds Rome. Well, kind of.

Rome already has a historical founder: Romulus, of Romulus and Remus. Hence why it's called, you know, Rome. So Virgil has Aeneas's son grow up to found a different city, and then that's the city that Romulus and Remus's mom is from, then they are eventually abandoned and nursed by a wolf and raised in the wilderness and then they found Rome.

If that sounds like a whole lot of fanfiction nonsense that barely makes any sense... that's because it is. And Virgil probably knew that.

There's a lot to get into when it comes to The Aeneid. There's Dido, the fierce North African queen who Aeneas falls for and then totally ghosts. There are wild battles and violent storms, spirits and prophecies and a whole chapter where they take a break and play lawn games. There's that one really creepy part where Jupiter makes out with his daughter, Venus. But for now, let's focus on one scene in particular: the underworld.

Virgil mashes together many different myths and histories in his poem. When Jupiter is being gross to Venus, for example, the god gets all meta and actually references a version of the myth where she's not his daughter (which makes it... kind of better but also not?). When Aeneas goes to the underworld to visit his daddy, Virgil gets especially weird and throws a whole bunch of different stuff in there: there's a forest of people who died by suicide (where Aeneas awkwardly runs into his ex) and a torturous, hell neighborhood, and there's also kind of a heaven section, and then there's a reincarnation area, where souls are being washed of their memories and hung out to dry for future use, like so much spectral laundry.

Aeneas's dad shows him all of the souls that will become his descendants, explaining that Julius and Augustus Caesar are basically going to be the best and the sexiest of all of them, and that Rome is going to be the most bomb city ever. According to the Fitzgerald translation:

"Turn your two eyes this way and see this people, your own Romans. Here is Caesar, and all the line of Iulus, all who shall one day pass under the dome of the great sky: this is the man, this one, of whom so often you have heard the promise, Caesar Augustus, son of the deified, who shall bring once again an Age of Gold to Latium, to the land where Saturn reigned in early times."

Aeneas is stoked to see his awesome great-great-great-grandkids. Then Aeneas hugs his ghost dad and leaves the underworld. And there's this passage, from the Fitzgerald translation:

"There are two gates of Sleep, one said to be of horn, whereby the true shades pass with ease, the other all white ivory agleam without a flaw, and yet false dreams are sent through this one by the ghost to the upper world. Anchises now, his last instructions given, took son and Sibyl and let them go by the Ivory Gate."

Virgil didn't invent the gates; they're from Greek mythology. But he does have Aeneas and his friend Sibyl leave through the ivory gates of deception. Meaning that... everything that just happened is a lie? That Aeneas is a lie? That this whole poem and the fabled greatness of Rome and Gus's divine right to rule is a lie?

With a couple of lines and one simple gate, Virgil changes the course of his poem. Suddenly, everything that came before and everything after, all of the fighting and the babes and the glorious, confusing founding of Rome is seeded with doubt. Did he really write an entire epic, only to undercut his own message right smack in the middle?

It's a passage that has haunted classicists for centuries. We'll never know for sure if this was an act of brave political subversion or a weird poetry mistake. Virgil died before finishing his poem, and Augustus had it published against the author's wishes. It became the smash hit that Augustus wanted, cementing his place as a divine and rightful Roman leader. It ranks just behind Homer for epic poems that we still read and study today. It shows us that the way we tell our own histories has immense power. That fake history, given enough time, gets lumped in with all the real stuff.

But it also shows us that, even in the most dire of poetry-writing situations, it's possible to resist the powers that be. It's possible to subvert and sow doubt through the briefest of passages. And even when telling the truth isn't an option, it is possible, at the very least, to point out a lie.