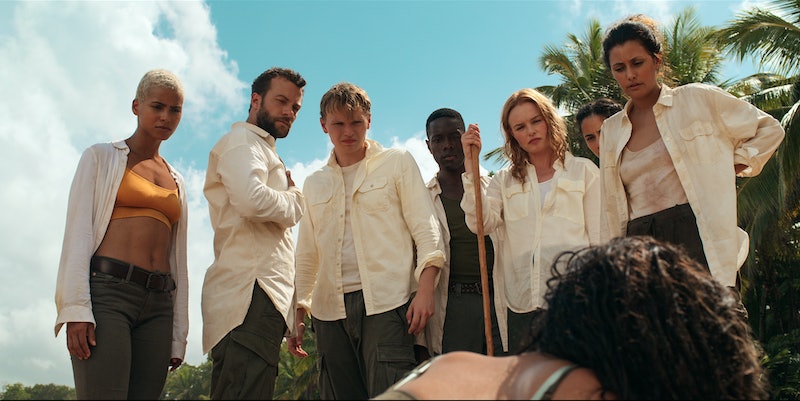 Almost exactly 15 years after Lost premiered on ABC, Netflix is taking viewers back to the island — no, not that island. Literally, The I-Land, their new sci-fi show. The series built a lot of anticipation with its Fyre Fest-esque promo and Westworld-meets-Lost vibes, and while it doesn't exactly live up to the hype, it does deliver on its mysterious premise: the first episode of the new show introduces as many questions as Lost did during its entire run.

The allusions to Lost aren't exactly subtle during the first hour of the new series. Aside from the whole attractive-strangers-stranded-on-an-island conceit, you also have creatures attacking the castaways, clues discovered in the jungle, and even a debate about the merits of moving inland to a fresh water source versus staying on the beach and waiting for rescue — a key debate in Lost's first season. But The I-Land is obviously influenced by other sources as well, including Lord Of The Flies (one of the first shots is of a conch), And Then There Were None (with 10 people trapped on an island being killed one by one), and more.

If that sounds like a mess… well, it kind of is. While Lost at least took its time introducing new mysteries (that first season is much slower-paced than you might remember), The I-Land throws so much at the wall in its very first episode, very little of it ends up sticking. Here are just some of the questions raised in the premiere; you can decide for yourself whether it's worth sticking around for eight episodes to find out the answers.

1. Who's Watching The Island?

One of the biggest mysteries is one the castaways aren't even initially aware of: who's watching them? Obviously someone must have brought them to the island, but in the final moment of the premiere, it's made clear that that someone is also keeping a very close eye on the group. When Chase smashes her conch shell in frustration, the camera closes in on something previously hidden inside: a barcode and a serial number, along with the phrase "Property Of I-Land." Oh, and there's also some sort of tracker/listening device among the shell's shattered remains.

This is the biggie. While the castaways could be stranded on an actual tropical island, that seems unlikely; there's almost certainly more going on than meets the I. Are they inside some sort of high-tech simulation? Are they trapped in a Westworld-like themed attraction? Are they criminals imprisoned in a futuristic penal colony, doomed to be punished for eternity? Or will The I-Land pull the ultimate troll job and reveal that its characters really were dead the whole time?

When the castaways wake up on the beach, they each find themselves lying on top of an item buried in the sand: the conch, a knife, a hatchet, a first-aid kit, a compass. Further clues turn up as they explore their surroundings even more: a book ominously titled The Mysterious Island (that one castaways tosses aside without reading or mentioning to anyone else, clearly a mistake) and a sign reading "Find Your Way Back." But who left these items for them? The person or persons who brought them to the island? Other castaways who were there before them, hoping to help the next round of victims escape? Or even themselves on an earlier loop, before their memories were wiped?

At one point in the premiere, our main castaway Chase is troubled by a dream involving a room with a red chair, a puddle of blood on the floor, and a vision of herself pointing a gun at someone and pulling the trigger. Is this a memory of the crime that brought her to the island? Is it a glimpse behind-the-scenes of her prison, during a loop where she managed to infiltrate the lower levels and harm one of her captors? Is it somehow a vision of the future, foreshadowing the ending of the show?

Kate Bosworth is the biggest name in the cast, and she plays the most intriguing character. Her confrontational castaway is either behaving very strangely… or she remembers more than she's letting on. If the castaways are having their minds erased and forced to repeat the same trial over and over again, is it possible that she somehow avoided having her memory reset? That would certainly explain why she seems to know more than she's saying, and why she seems so hostile towards Chase, a stranger she's supposedly just met. There's clearly history there — history that K.C. shouldn't remember, but seems to.

Although the ill-fated Donovan didn't technically die in this episode, he's clearly not long for this world. After being attacked by sharks while swimming, he washed up on shore, grievously injured but alive. Once he succumbs to his wounds, who will be next? Will it be vain and unhelpful Taylor? Quiet and brainy Mason? Optimistic and cooperative Hayden? It seems obvious which castaways are destined to make it to the end (Chase, K.C., Brody) — or will The I-Land have the guts to pull a Lost and kill off a seemingly major character?

Given that The I-Land is being touted as a limited series consisting of only eight episodes, hopefully the writers have the solutions to these mysteries planned out and ready to be answered, so viewers won't be complaining about the ending for the next decade and a half…

This article was originally published on Sep. 12, 2019