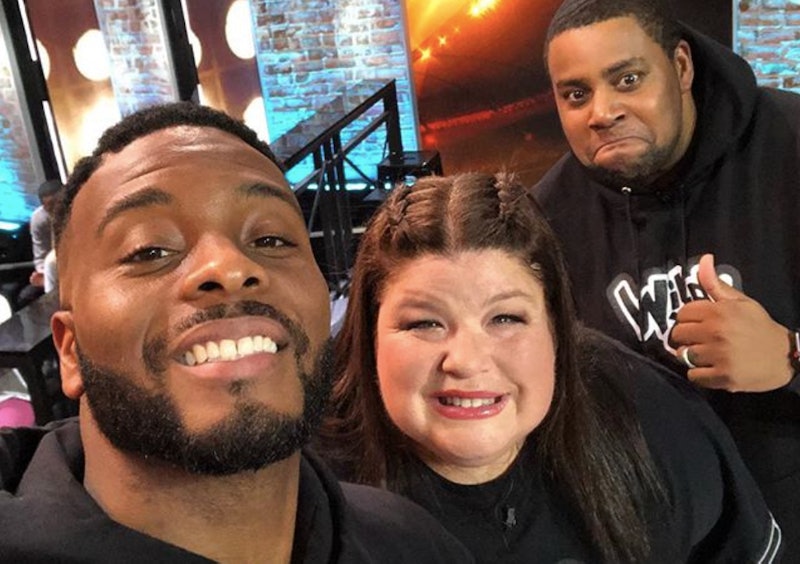 What a time to be alive. Nearly 24 years after the Nickelodeon sketch comedy show first began to air, All That cast reunited on Wild 'n Out for an upcoming episode. OG cast members Kenan Thompson, Kel Mitchell, Lori Beth Denberg, and Josh Server came together in a surprise reunion for the MTV show, and it looks like nothing has really changed in the All That gang after all these years.

On Sunday night, Mitchell shared a handful of photos, enough to make any former All That lover explode with joy. And it's fitting that they were on Nick Cannon's show, since he's an All That alum as well. But these guys were truly the All That vets. Not only were they on the show from the start in Season 1, but they stayed on for the longest amount of time. From the stages of Nickelodeon to MTV, Mitchell's behind-the-scenes photos prove their rapport is alive and well.

Missing from the Season 1 crew are actors Alisa Reyes, Katrina Johnson, and Angelique Bates. Additional noteworthy cast members included Amanda Bynes and Danny Tamberelli, who also weren't present. It's unclear exactly what this on-camera reunion will consist of when it airs, but the photos alone have fans beyond excited.

It's like the '90s have returned and fans are reliving their best childhood life.

And of course, hopes for an All That reunion show have emerged.

However, this isn't the first time cast members have reunited since the show left the air 13 years ago. In spring 2016, All That cast reunited to promote The Splat on Nickelodeon. Cast members cast members Kenan Thompson, Kel Mitchell, Danny Tamberelli, Lori Beth Denberg, and Josh Server came together for the network's nostalgic initiative. The Splat aired '90s reruns with commentary from cast members in between.

While there were no new sketches or material shot for The Splat, at the time, cast member Tamberelli said the actors would be up for a real show reunion. According to TMZ, he was optimistic that the crew would want to come back together for a show if their schedules allowed for it (and that he'd work hard to convince anyone who was on the fence).

It's great to see that these guys haven't lost their touch for being goofy (and of course a little wild), but what have they been up to lately?

Most fans may know that Kenan Thompson has become a household name on the iconic Saturday Night Live. He joined the show in 2003 and broke the record for becoming the longest-serving SNL cast member in 2017. Some of his classic skits include Live Report, Family Feud, and Black Jeopardy.

As for Lori Beth Denberg, she's taken up extracurricular activities outside of acting. In addition to having small TV cameos in the last few years on shows like Hollywood Darlings and Raymond & Lane, Denberg also became a wedding officiant. Overall, she's maintained a low profile, but obviously still loves All That as much as fans do.

Lastly is Josh Server, who was a Nick staple, additionally appearing in Figure It Out, Alex Mack, Good Burger, and The Amanda Show. Server had a knack for totally freaking out and taking on a variety of roles. In addition to appearing on The Splat in 2016, he starred alongside Anna Camp in the Amazon Prime series Good Girls Revolt in 2016.

Whether or not the gang decides to move forward with an actual All That reunion show, this is the exactly the kind of news we need right now, and that in itself feels like enough.