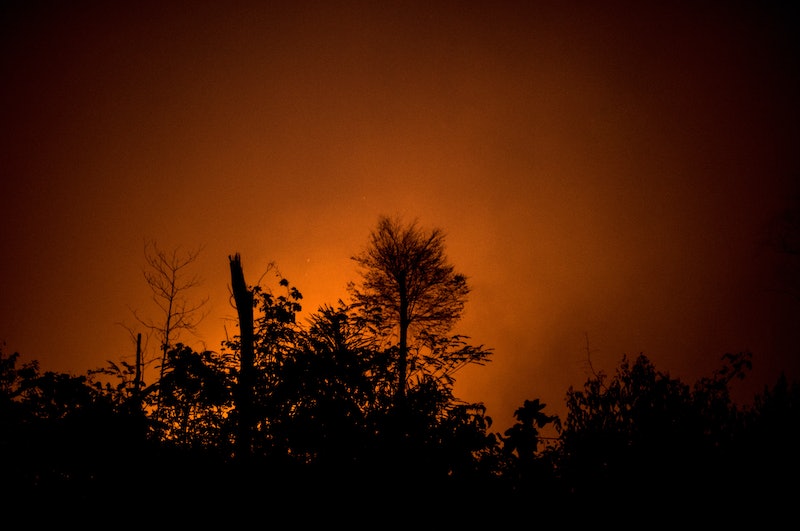 This August, the world finally listened to the news that Amazon rainforest was on fire, and for a while it was international news. Initially the fires were thought to be accidental, but environmental campaigners soon suggested it was due to intentional deforestation tactics.

The Amazon rainforest isn’t just the largest tropical rainforest in the world, but is also home to 10% of the world’s biodiversity, as WWF notes. And as trees absorb carbon dioxide as they grow, losing vast swathes of rainforest is worrying in the fight against climate crisis, too. It's not just a big deal globally, but also to the ingenious communities living in and around the rainforests.

Although reporting might have quietened, the Amazon fires are still not out. According to Jet Propulsion Laboratory (JPL), which is a part of NASA, fires in the Amazon basin continue to burn into November. JLP says the fires are “mainly the result of such human activities as land clearing and deforestation.”

So why exactly are humans clearing land in one of the most important ecosystems in the world? Sadly the reason for deforestation in the rainforest is usually to clear land for crops, mainly soya beans, according to Greenpeace. And those beans aren’t actually for human consumption, but rather food for cows, chickens, and pigs, which are being reared for meat. OpenLearn, the Open University's blog, reports that 91 % of land deforested since 1970 is used for livestock pasture. And according to the Sustainable Trade Initiative, only 14% of UK soya imports are "deforestation-free".

The easiest thing you can do to help is look at the food you’re consuming. Cutting out meat and dairy will mean you are less likely to consume soya from directly affected areas, as the majority is used for livestock. If you can’t be on a plant-based diet, checking where your food is sourced is important. Some brands will say if they are deforestation-free.

As Rainforest Saver notes, one problem that occurs after slash-and-burn agriculture is that the soil's nutrients are depleted, making it hard to grow plants again. But as the BBC reports, new research has found that a plant called inga could be the solution, as it adds nitrogen into the soil as it grows. It's also capable of growing very quickly on poor soil. Farmers are now being encouraged to plant the crop, as it produces edible fruit and releases leaves that can be used to create mulch — a substance that helps promote soil fertility. The Inga Foundation is one charity helping to give farmers access to the miracle plant, you can donate to their cause here.

One of the best ways you can help is by staying informed on the rainforest and shouting about it. Research what's going on and tell the people around you. Listen to indigenous communities in the area. For instance, it’s important to know the different types of fires, as not all are bad, with controlled fires being quite important, as the Independent reports. You can also sign a petition through charities like Greenpeace to stand with the indigenous people living in the rainforests. InfoAmazonia, a data journalism site, shows detailed maps about the Amazon rainforest. Some indicate in real-time mining happening in the protected areas in the Amazon, which is prohibited. Other maps show the number of environmental activists killed.

While you may feel like you can't make much change from a distance, there are plenty of small things that will make a real difference.

More like this
This Is When Netflix Is Going To Start Charging You For Sharing Passwords
By Darshita Goyal
Watch Jacinda Arden’s Devastatingly Honest Resignation Speech
By Sam Ramsden
Gen Z Are Twice As Likely To Identify As Queer, According To New Data
By Sam Ramsden
Pret & Costa’s Coffee Is The Strongest On The High Street, According To Which?
By Sam Ramsden
Get The Very Best Of Bustle/UK
Sign up for Bustle UK's twice-weekly newsletter, featuring the latest must-watch TV, moving personal stories, and expert advice on the hottest viral buys.

This article was originally published on November 12, 2019