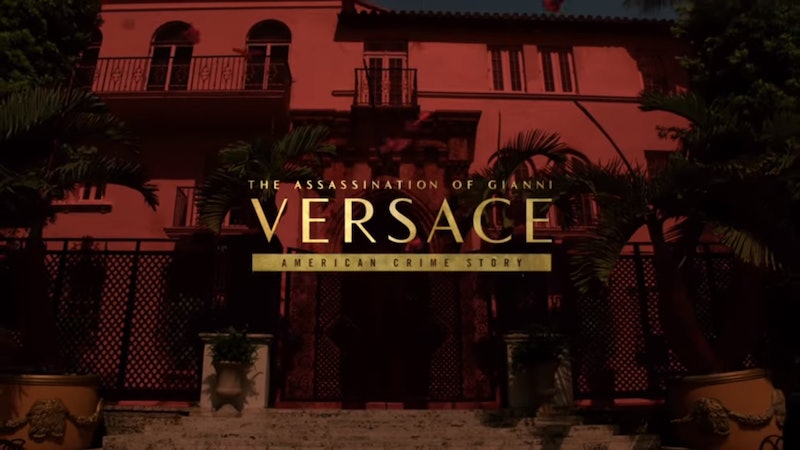 Fans who sat through the commercials during Tuesday night's premiere of American Horror Story: Cult were treated to the first teaser for American Crime Story: Versace. If you were too busy trying to forget about all of those creepy clowns during the breaks, then fear not, because the operatic preview is now online. Without featuring a single member of the cast, the teaser seems to give viewers an evocative peek at the tone of the long-awaited second season of American Crime Story. At this point, there's no way to be sure of how the season will evolve, but if it embodies just a touch of the sneak peek's style, viewers could be in for an artful, but intense journey.

The teaser opens on a quiet day outside of what appears to be the gates of the late Gianni Versace's Miami home. The peacefulness is shattered when two gun shots ring out, sending doves flying. The scene is then drenched in red.

American Crime Story: Versace is set to chronicle Versace's 1997 murder and the subsequent search for his murderer, Andrew Cunanan, played by Glee's Darren Criss. Where Season 1 of Ryan Murphy's true crime series took on the infamous O.J. Simpson trial, the choice to tackle the murder of Versace in Season 2 is sure to create an entirely different vibe. The famed designer was beloved by many, and his sudden death at the hands of Cunanan, a serial killer, left the country in shock.

While The People v. O.J. Simpson focused on a trial, American Crime Story Season 2 is set to feature both the days leading up to Versace's death and the manhunt that followed. In addition to Criss, the season will feature Edgar Ramírez as Versace, Ricky Martin as Versace's boyfriend, Antonio D’Amico, and Penélope Cruz as Donatella Versace. During an interview with Entertainment Weekly, Ryan Murphy suggested that the heartbreak will palpable this season. Murphy told EW that shooting Versace's death was particularly difficult for the cast and crew. He said,

The Assassination of Gianni Versace: American Crime Story is set to air on FX in 2018, and if the teaser is any indication of what's to come, then true crime fans should be prepared for an emotional season.