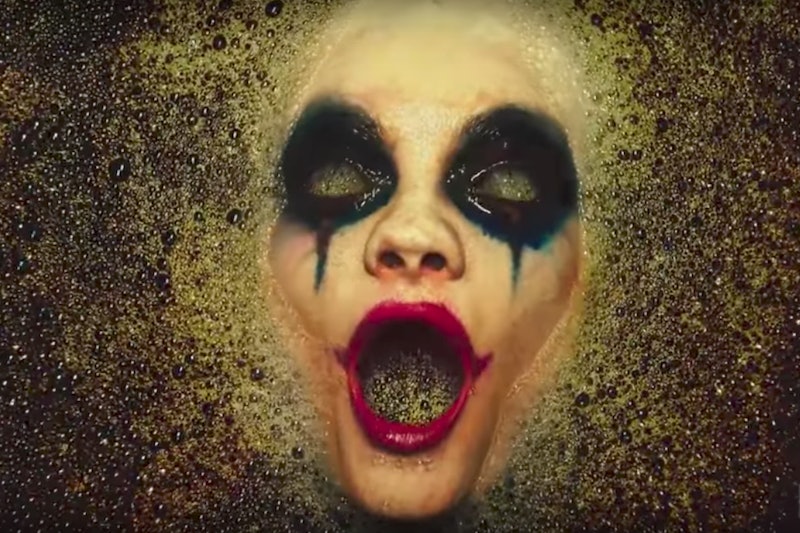 Are you ready for the brainwashing to begin? Then get a load of these American Horror Story: Cult character portraits, which offer fans their best look yet at Season 7 of the Ryan Murphy anthology series. So far, Murphy has teased viewers with the season's title, theme, poster, and a few creepy clown-filled teasers; but the five new photos are the first actual glimpse at the content of Cult itself.

So far, Season 7 seems to feature the lowest amount of returning cast members so far. While Jessica Lange remains absent since her last stint on Freak Show, it has also been confirmed that veterans like Kathy Bates and Lady Gaga will not be joining Cult, and the status of familiar faces like Angela Bassett, Denis O'Hare, and Lily Rabe are unknown. But that larger-than-normal turnaround means there's plenty of fresh blood for Season 7's chopping block… including four of the five cast members featured in the following photos.

Of course, Murphy will make fans wait a little longer to see Cult's two biggest returning names — Sarah Paulson and Evan Peters — in action, although he's already teased that they're playing lovers named Ally and Kai. While fans eagerly anticipate their first glimpse at that unlikely pair, here's the first taste of Cult's scary (and scarily gorgeous) cast of characters, along with what they reveal about Season 7.

The sole veteran in the mix is Cheyenne Jackson, who's been a part of AHS since Season 5, playing Hotel Cortez owner Will Drake in Hotel and reality TV producer Sydney in Roanoke. His pose in this portrait, sitting in a wingback armchair within a well-appointed office, already brings to mind a psychologist before you even notice that his character name is Dr. Rudy Vincent.

It's clear from the shadowy figures standing outside his window — not to mention the season's subtitle — that plenty of Cult characters will find themselves in need of a mental health professional. But is Dr. Vincent here to help them? Or to brainwash and welcome them into the hive?

Although this is the Teen Wolf actor's first time on American Horror Story, he has actually worked with Ryan Murphy before, playing a disfigured (and ill-fated) patient on Season 2 of FOX's Scream Queens.

Although Haynes' pose here — standing by a car under a streetlamp — might bring to mind a particularly handsome chauffeur, his character name, Detective Samuels reveals that he's actually a gumshoe, here to patrol the streets and defend the innocent against bat-wielding psychopaths like the creep lurking in the background of the photo. But is Det. Samuels really here to protect and serve? Or does he get a kick out of participating in the mayhem, Purge-style?

Like Haynes, Lourd is also making her AHS debut in Cult, but also like Haynes, she's partnered with Murphy before on Scream Queens, starring as the spacey Chanel #3 on both seasons of that series.

This portrait is a little less revealing than the first two, if only because it's not immediate apparent from the pose or the name what her character's profession is. But Winter Anderson is an awesome name, and I'm loving her whole hippie-milkmaid look she's got going on. While she definitely looks like she could be a brainwashed member of a sadistic cult, it's possible she'll be one of the season's rare innocents, someone who finds herself under attack from members of the titular hive like the terrifying clown that is crawling out from under her bed — OH GOD, LOOK OUT.

The last two cast members featured in the portraits are Murphy virgins, neither having appeared in AHS before, nor any of the prolific producer's other projects. But Billy On The Street acolytes — or fans of Eichner's performances in comedies like Difficult People, Parks And Recreation, or Friends From College — will probably be thrilled to see his talents put to use in such a wildly different context.

Like Lourd's portrait, Eichner's is rather vague on details on who his character is other than the name Harrison Wilton, and the fact that Harrison apparently likes hanging out in poorly-lit gardens that are perfect hunting grounds for psychos in clown masks. Harrison's furrowed brow indicates that he's not in on this whole cult nonsense, which means he may be forced to team up with Winter to fight them off. Perhaps he's a goofball neighbor with a crush on the beautiful girl-next-door who tries to protect her when things in the 'hood go south — only to wind up stabbed to death by her when it's revealed that his crush is one of the psychos? (That's my weirdly specific theory, anyway.)

Although Cult marks Pill's first collaboration with Murphy, television audiences will likely recognize her from her work on shows like The Newsroom and In Treatment — or from her feature credits like Milk or Scott Pilgrim vs. The World.

This is my favorite of the five portraits for several reasons. First, the name Ivy Mayfair-Richards is just so hilariously flowery it's perfect — especially for a butcher. Secondly, it's impossible to tell if that giant pile of meat in front of her is pig or cow or human, and that's amazing. Thirdly, the nonchalant way Pill holds that giant knife (not to mention the nonchalant way she rocks that bold haircut) instantly makes me love her character so much, I won't mind if she starts stabbing people left and right with it. She should start with that creeper lurking behind her, though.

Hopefully there will be more character details and trailers for Cult coming soon. But in the meantime, this has been an excellent appetizer for what's sure to be a very bloody meal when Season 7 kicks off in September.