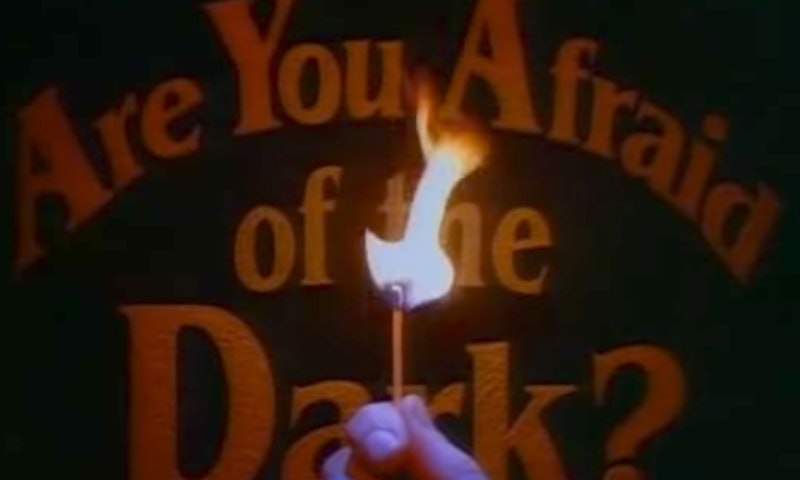 Come gather 'round the campfire, members of The Midnight Society, because there's a tale you need to hear: The release date of Are You Afraid Of The Dark, the upcoming movie reboot of the beloved Nickelodeon show, was just announced. And it couldn't possibly be more perfect for a bunch of spooky, overgrown kids like ourselves. As reported by Deadline, Are You Afraid Of The Dark will be released on Oct. 11, 2019, meaning it'll premiere right in time for Halloween two years from now. So, you should probably start planning your costume for that extra-special Halloween screening of the movie now.

While little is known about the movie, besides the fact that it'll basically be one of the greatest gifts ever bestowed on our generation, the one thing we do know about it so far is encouraging. According to Variety, it's the Are You Afraid Of The Dark movie is being written by Gary Dauberman, one of the writers of this year's supremely fun yet terrifying adaptation of It, who also recently wrote Annabelle: Creation. This suggests that the most beloved horror show of our childhood is already in some very safe hands indeed. It's also encouraging that the people who are thus far involved with Are You Afraid Of The Dark had the foresight to give it the release date of our dreams. Clearly, this is a movie looking to do right by fans. However, it still has a lot to live up to.

The Canadian anthology horror series ran between 1992 and 1996. It packed in a whole lot of scares, and some amazing early performances from beloved stars, within those four years. The show had a lot of great villains, spooky locations, and unexplained events to keep you awake at night. To a kid, that relentless sense of spooky storytelling completely validated our sense of feeling grown-up and daring. Are You Afraid Of The Dark never patronized its young viewers. It was a show that knew exactly what scared kids and how, and it let us deal with those fears in a really fun way that we can still connect with as adults.

Featuring an abandoned playground in a stormy night, a toy clown in an attic, and a handle twisting on a locked door, the intro of Are You Afraid Of The Dark was terrifying enough in and of itself. However, the episodes themselves were always incredibly well-plotted, fun, and downright chilling to the average child. More often than not, Are You Afraid Of The Dark gave you nightmares almost every time you watched — but that only made you want to watch even more.

Part of that appeal came in the anthology nature of the show. Zeebo The Clown or The Ghastly Grinner would catch up to you in your nightmares, sure, but you also felt safe in knowing that you wouldn't have to encounter another story involving either of them ever again. Not that it mattered. Because nearly every episode was so tenacious with its scares — always pitted against children, too, which upped the terror — that your nightmares were inspired, regardless.

It's difficult to envision exactly how the movie will be able to translate the show's anthology horror charms in a standalone movie. But with that in mind, it's worth noting that the 2015 movie of Goosebumps proved that there are ways to step outside of those anthology and nostalgia boxes to deliver something that maintains what made the original so great, while also pushing it into new and unique territory.

After all, it isn't just nostalgia that makes rewatching Are You Afraid Of The Dark so enjoyable, although it's undoubtedly loaded with a solid sense of it; it's also that the show remains exactly as compelling as you remember. Though it's fun to look back on episodes starring people like Ryan Gosling and Neve Campbell, the real delight of watching Are You Afraid Of The Dark as an adult is in revisiting our old childhood fears. We've either gotten past quaking over the sight of The Ghastly Grinner, or he still sends chills down our spine, but still, there's something thrilling about facing all of that as a supposedly together grown-up.

Perhaps most importantly, to fans, The Midnight Society always felt like our gang. That we were somehow the lost member listening in on the story and feeling the heat of the campfire radiate off the TV. We were all part of it, so why wouldn't we want this reunion? The question is, however, will the Are You Afraid Of The Dark movie bring back some of the original cast members to tell new stories as adults, or to face one of the iconic villains from their old stories? Or will it involve a new Midnight Society of young, creepy kids trying to scare each other silly out in an unknown woods?

As long as they manage to stoke the flames of that old campfire, then it'll at least be a story worth watching, regardless of how they approach it. Throw some non-dairy creamer into the campfire, gang, because this meeting of The Midnight Society is officially closed (until 2019, at least).