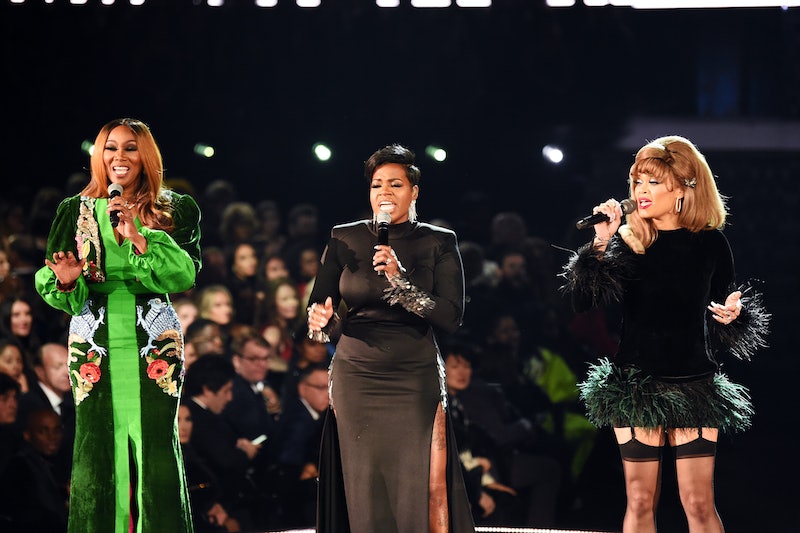 The 2019 Grammy Awards were full of intense, moving moments, but when Andra Day, Fantasia, and Yolanda Adams took to the stage to honor the Queen of Soul, there wasn't a dry eye in the house... or on social media. The Grammys' tribute to Aretha Franklin left fans Twitter emotional, sharing posts about how struck they were by the touching performance.

The trio took to the stage after the show's annual In Memoriam segment, which honored other late stars, including rapper Mac Miller. Standing on a minimal set in the middle of the arena, Adams, Fantasia, and Day belted out a rendition of Franklin's iconic song, "(You Make Me Feel) Like A Natural Woman" for the audience, complete with incredible, soulful riffs and modern interpretations on the classic soul number. Their love and respect for Franklin was palpable, and fans on social media were quick to explain that the performance had brought them to tears.

Of course, that wasn't the only tribute to Franklin during the Grammy Awards on Sunday night; during a sultry mash-up performance of "MassSeduction" and "One Kiss," St. Vincent and Best New Artist winner Dua Lipa sang a little bit of Franklin's signature song, "Respect."

The trio's performance is just one way that the Grammys is planning to honor Franklin in 2019. In December, it was announced that some of music's biggest names were asked to perform at a tribute concert for the musical icon, which was taped on Jan. 13. (It will reportedly air on CBS in April.) Hosted by Tyler Perry, the event included performances from some of Franklin's contemporaries and friends, like BeBe Winans, Shirley Caesar, and Patti LaBelle.

"This special will celebrate Aretha Franklin’s numerous accomplishments as an entertainment icon, singer, songwriter, pianist, actress and civil rights activist," said Jack Sussman, the network's Executive VP of specials, music and live events told Variety in 2018. "Aretha had an incredible effect on humanity and music with her indomitable spirit and grace. We look forward to honoring this music legend with numerous performers who all admire and respect the Queen of Soul."

Keys, who hosted the 2019 Grammy Awards, also performed at the tribute concert, along with other Recording Academy favorites like Kelly Clarkson, Common, Jennifer Hudson, Brandi Carlile, and Janelle Monáe. Rounding out the star-studded list of performers was Alessia Cara, Chloe X Halle, H.E.R., and SZA.

In December, Clarkson — who famously performed "Respect" during her audition for American Idol — opened up about the singer's influence on her music on ABC’s 2018: In Memoriam special. "When I was a kid … I know it’s hard to believe, but I was actually shy when I was little," Clarkson recounted. "Very hard to believe, I realize that! You can ask my mom. When I was little I just had such a hard time communicating, which is actually why I started to write before I even could sing. It was just to get my emotions [out], and because I was afraid to let down walls because so many crappy things happened."

“Aretha was the one singer that reached real down in me. Then it was like, ‘It’s okay to cry, it’s okay to like be mad at something, it’s okay to get through something.’ It’s really weird but there [were] very few voices when I was a kid that [could] really do that."

Clearly, Clarkson isn't alone in feeling the impact and legacy of Franklin's music months after her passing. But, based on the incredible, tear-jerking tribute performances during the 2019 Grammys, it seems as if her music will continue to touch people everywhere.