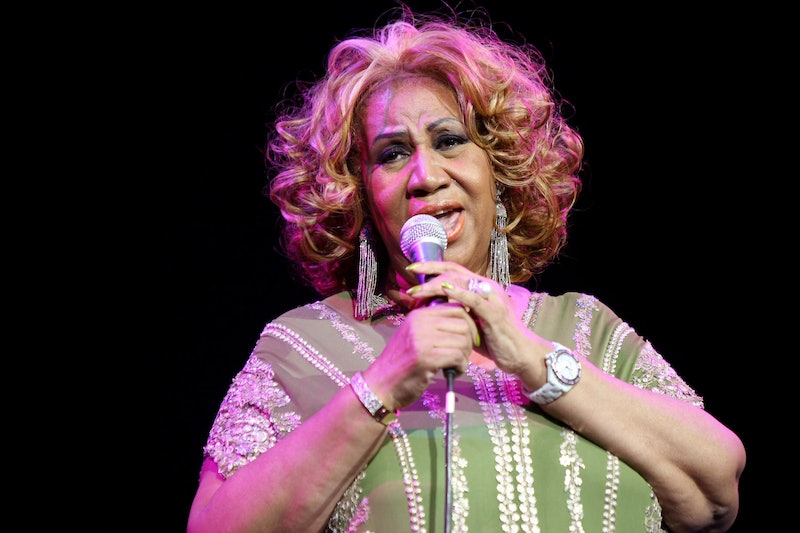 Next month, the music industry will pay a little R-E-S-P-E-C-T to the Queen of Soul with a special concert. And no surprise, the Aretha Franklin tribute concert lineup is filled with big name stars with even bigger voices celebrating some of her biggest hits.

Aretha! A Grammy Celebration for the Queen of Soul, dedicated to the late singer, who died at the age of 76 back in August after battling pancreatic cancer, will be hosted by Tyler Perry, according to Variety. The performance will air as a special in 2019 on CBS and will feature John Legend, Celiné Dion, and Kelly Clarkson, who recently brought down the house with her tribute to Reba at the Kennedy Center Honors.

The lineup for the concert, which will be taped on Jan. 13 in Los Angeles, is an eclectic mix of legends, including BeBe Winans, Yolanda Adams, Shirley Caesar, and Patti LaBelle, who was never Franklin's rival despite reports. Not to mention, soon to be legends like Alicia Keys, Common, Jennifer Hudson, Brandi Carlile, and Janelle Monáe. They'll also be joined with new stars like Alessia Cara, Chloe X Halle, H.E.R., and SZA.

The upcoming special will be a way for both those who knew Franklin and those who only knew her hits to celebrate her "numerous accomplishments as an entertainment icon, singer, songwriter, pianist, actress, and civil rights activist," according to a statement in Variety from Jack Sussman, CBS’ exec VP of specials, music and live events. “Aretha had an incredible effect on humanity and music with her indomitable spirit and grace. We look forward to honoring this music legend with numerous performers who all admire and respect the Queen of Soul.”

Many of those on the lineup have frequently paid their respects to Franklin. When Clarkson appeared on American Idol she put her own spin on Franklin's "(You Make Me Feel Like) A Natural Woman." Her performance helped her win the show, and arguably played a part in launching her career in the music industry.

After her passing, Clarkson tweeted that Franklin "is the reason why I sing from that part deep inside of me that few could ever reach. She was my favorite and will always be. What a gift she has left all of us with her musical footprints. There will never be another like her. She was truly special."

This won't be the first time some of these artists perform publicly to pay tribute to Franklin. Caesar, Perry, and Hudson were all in attendance at the singer's televised memorial, where Hudson stunned the crowd with her take on "Amazing Grace."

It's no surprise that Hudson would be invited to perform at the special considering Franklin gave the singer and actor her blessing to star in a biopic. But, it was the lessons Franklin taught Hudson that meant the most. "I will Say while teaching me about your life, u taught me so much about life and schooled me in mine," Hudson wrote on Instagram after Franklin's death. "I will never forget those teachings."

Franklin may be gone, but her influence will not be forgotten.