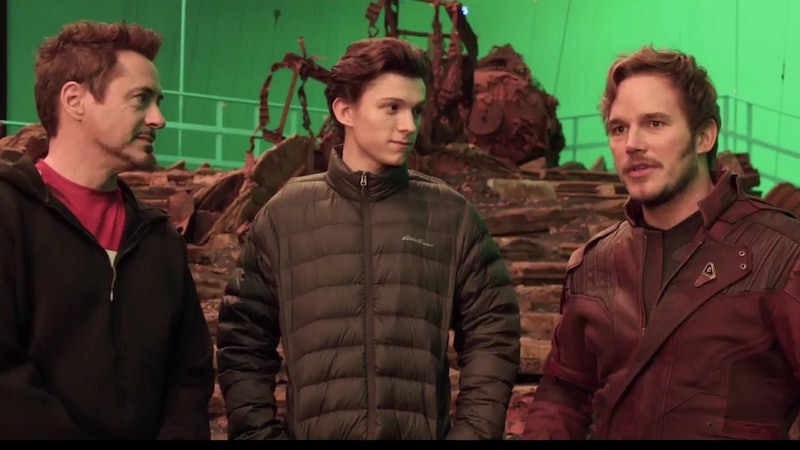 On Jan. 23, production began on Marvel's next enormous ensemble franchise film, Avengers: Infinity War. To spread the word, a preview video was released, highlighting some of the plot points, actors, and imagery that fans can anticipate seeing in 2018 when the movie hits the big screen. But watching the first look video, my focus was on something else: the fact that even with this new movie, the whole Avengers universe created by Marvel Studios still feels like a world dominated entirely by men.

First off, all of the actors featured in the promo are men: Robert Downey Jr., Chris Pratt, and relative newcomer Tom Holland as Spider-Man. Along with those three actors, the film's producer, directors, and screenwriters, all of whom are male, each get a few moments to explain their processes, roles in making the film, and how they're shaping this latest piece in the Avengers saga. It's interesting stuff, but the fact that it's entirely men seen in this promo, with dude after dude talking about the movie, dampened the excitement I had upon opening up the preview video.

That said, there's no way to know how predominantly Avengers: Infinity War will feature women based solely on a promo. The movie has been in pre-production for years now, and the script could easily feature more female voices. Besides, it makes sense that the promo would choose to feature men like Downey Jr., as he and the franchise's other male stars, director, writers, and producers are well-known and intensely popular with fans.

But even so, it's still frustrating that the Avengers promo didn't put any of its female characters front and center along with the guys. Would it have been so hard for the promo to include Scarlett Johansson, who plays the much-beloved Black Widow in the series? How about Elizabeth Olsen, who plays the fierce and compelling Scarlet Witch? Nabbing one of the series' few female lead players to co-star in the promo would've made the whole preview seem less like a bros' club.

And, unfortunately, the issue isn't limited to this Avengers promo. As The Hollywood Reporter recently pointed out, Zoe Saldana's Gamora is the only character without any lines of dialogue in the first three trailers for this summer's upcoming Guardians of the Galaxy 2. Add that to the fact that Gamora also didn't have any lines of dialogue in the first two trailers for the original Guardians film, and it seems to me like marvel is ignoring its female characters.

And that concern isn't exactly new. There was the whole issue of Black Widow not being included in any of the original Avengers merchandising, such as in toy packs or on clothing, and a similar problem with merch happened with Gamora when Guardians of the Galaxy was released, spawning the hashtag #WheresGamora. (In 2015, Disney Consumer Products told Vanity Fair in response to the backlash that “Black Widow is a staple in the Marvel Universe with a robust consumer products program. Tied to the release of Avengers: Age of Ultron, Marvel has over 60 Black Widow SKUS across diverse categories such as Hot Wheels, action figures, video games, t-shirts, costumes and collectibles, with even more products available for back to school and Halloween.” That same year, Guardians' director James Gunn said in a Facebook Q&A that he had "a big conversation about this yesterday with one of my producers at Marvel about trying to make sure that Gamora is represented more in all the Guardians toys, but especially in the clothing and bedsheets and all that stuff. I think it’s really important.”)

After a few years of criticism now, one would like to think that Marvel would incorporate more women into its movies' marketing and promotion, but that's just not the case. And look, I realize that huge, big-budget movies take years and years to make, and that adding women into the picture isn't something that can happen overnight. But the fact of the matter is, the absence of women in Marvel's promotional material is epically frustrating.

And yes, the Brie Larson-starring Captain Marvel is coming soon, marking the first female-led film for the studio, but that's just one movie out of a planned 23-film, three-phase universe. And though fans have been promised a female director for Captain Marvel, one still hasn't been hired, nor has a woman been chosen to helm any of the male-dominated Marvel films. Additionally, the whole MCU has had only one female producer in Amy Pascal for Spider-Man: Homecoming, and one female screenwriter so far in Guardians of the Galaxy's Nicole Perlman. Thankfully, Inside Out writer Meg LeFauve has joined Perlman to write Captain Marvel, so at least a second is on the way.

But while it's important to hire women to write and direct female-led films, it's also just as important to represent women in the movies' casts and promotional materials, too. Trailers and teaser videos are the first face of Marvel movies fans see, and it's disapponting that the myriad of female comic book characters around are getting the short end of the stick in the MCU. The criticism of Marvel's male-dominated world and campaigning from fans to add more women into the mix have been going on for years, but progress seems seriously slow, and the Avengers: Infinity War first look promo feels like another straw on the camel's back. Hopefully, the film, as well as Guardians of the Galaxy 2, which will feature a new female character, won't be as male-dominated as they seem, and Marvel will soon break free of this unfortunate boys' club.