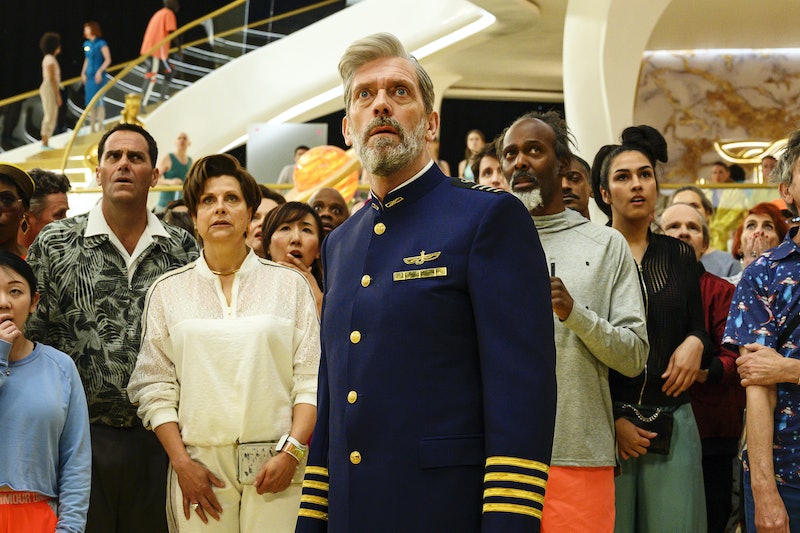 In space, no one can hear you scream — which is good because the bougie passengers of Avenue 5 will be doing plenty of screaming when their luxury space cruise liner malfunctions, stranding them far from Earth with dwindling supplies. Fortunately, the cast of HBO's Avenue 5 is full of familiar, reassuring faces who will surely steer the ship to safety… right? Well, maybe not, but at least there should be plenty of laughs along the way as the inept crew and the hysterical passengers scramble to survive in the vacuum of space.

Avenue 5 comes to HBO from creator Armando Iannucci, who also created the acclaimed, Emmy-winning comedy Veep. That long-running series just aired its final episode in May of last year, so Avenue 5 arrives just in time for viewers feeling starved for Iannucci's specific brand of satire. The Scottish filmmaker is also an Oscar nominee for the script of his 2009 film In The Loop (which he co-wrote alongside Succession creator Jesse Armstrong), which was a spin-off of his popular British series The Thick Of It. He also wrote and directed the 2017 comedy The Death Of Stalin and the 2019 historical drama The Personal History Of David Copperfield.

Fortunately, Iannucci was able to crew the Avenue 5 with the best of the best to play the worst of the worst: you may recognize the cast from Iannucci's former work, other HBO sitcoms, and some of your favorite TV shows of the past couple of decades.

You may know Laurie best as the curmudgeonly Dr. Gregory House, a role which earned the British actor six Emmy Award nominations over the course of 8 seasons and 177 episodes. This isn't the first time Laurie and Iannucci have worked together; Laurie recurred throughout four seasons of HBO's Veep as the smarmy Senator Tom James, and he also recently appeared in Iannucci's The Personal History Of David Copperfield as Mr. Dick (aka Richard Babley). His other credits include Tomorrowland, the Hulu series Chance, and the recent limited series adaptation of Catch-22.

Woods is perhaps most famous for another HBO sitcom, Silicon Valley, on which he starred as the awkward and loyal Jared for all six seasons. But although you may have forgotten it, Woods actually appeared in Iannucci's Veep as well: he portrayed Amy's boyfriend Ed in three episodes early in the series. Woods' first big role was as Gabe Lewis in the final four seasons of The Office, and is also a veteran of Paul Feig comedies including The Heat, Spy, and Bridesmaids.

This is Gad's first collaboration with Iannucci, but the pair seem like a perfect fit already. Gad rose to fame as the loud and hapless Elder Cunningham in the Broadway musical The Book Of Mormon, which earned him a Tony Award nomination alongside his co-star Andrew Rannells; that success launched him to a prolific onscreen career, including his most iconic career as the voice of the talking snowman Olaf in the Frozen films. Gad's other credits include LeFou in Beauty And The Beast, as well as roles in Murder On The Orient Express and the upcoming Artemis Fowl.

Over the past two decades, Nakamura has undoubtedly blessed your screen with her comedic talents, appearing in dozens of successful and beloved shows. Roles you may recognize her from include Cathy, the assistant to Rob Lowe's Sam Seaborn in Season 1 of The West Wing; math teacher Mrs. Crupp on 8 Simple Rules; Lily's pediatrician Dr. Miura on Modern Family; support group member Yolanda on Go On; the titular character's wife, Dr. Allison Park, on Dr. Ken; and Jen's neighbor Karen on Dead To Me. She previously worked with Iannucci on an episode of Veep, in which she briefly appeared as an old friend of Selina's.

Star Trek fans will surely delight in seeing Phillips in another space-based series; the actor is perhaps most famous for starring as Talaxian chef and "morale officer" Neelix in all seven seasons of Voyager. He also appeared in one episode of Veep Season 4 as a member of a congressional committee investigating Selina's administration. You may also have seen him in episodes of Bones, Chuck, Girls, and Better Call Saul.

Before Avenue 5, Amuka-Bird and Iannucci collaborated on The Personal History Of David Copperfield, in which the Nigerian-born actress appeared as Mrs. Steerforth. You may also have seen her in movies like Jupiter Ascending, A Private War, or the recent Netflix film The Laundromat.

If you watch a lot of British television, you've probably seen Crichlow before, perhaps on an episode of Doctor Who or in the supernatural comedy Being Human, or in the terrifying "White Bear" episode of Black Mirror. She also had regular roles on short-lived American shows Back In The Game and A To Z, and will appear later this year in the Jared Leto supervillain movie Morbius.

Like a lot of British actors, Patel got his start in the long-running British soap opera EastEnders, on which he appeared in 566 episodes from 2007 through 2016 as the studious young Tamwar Masood. Patel recently broke out to American audiences as the dashing, crooning lead of Danny Boyle's Beatles-themed rom-com, Yesterday. He also appeared in the historical adventure epic The Aeronauts and will next be seen in Christopher Nolan's epic blockbuster Tenet.

Front previously earned a nomination from BAFTA (the British Academy) for her role in Iannucci's popular political satire The Thick Of It. Over the years she has guest starred in plenty of popular British shows including Midsomer Murders, Humans, Doctor Who, Poldark, and recently appeared alongside Avenue 5 co-star Patel in The Aeronauts.

This hilarious cast of characters will save the Avenue 5 — or doom it to disaster — when the new HBO series premieres on Sunday, Jan. 19.