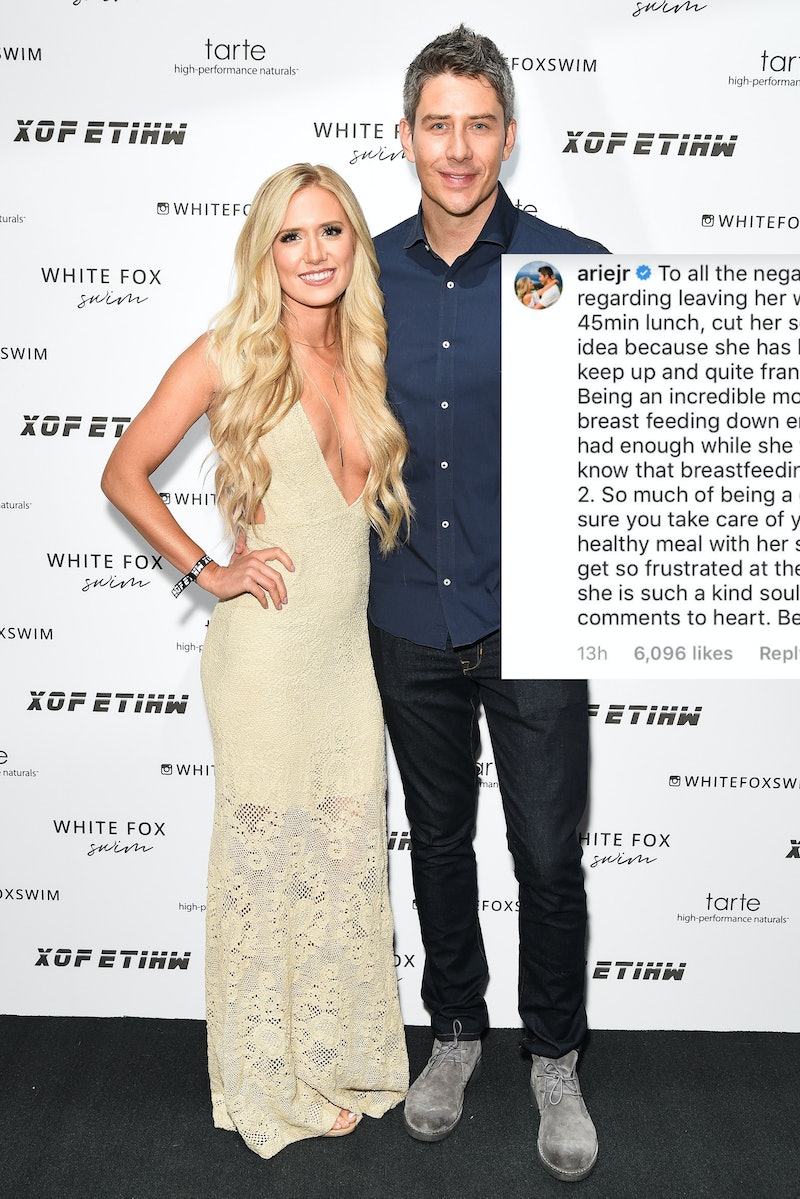 One week after welcoming their daughter into the world, Lauren Burnham and Arie Luyendyk Jr. are already receiving backlash for one of their parenting choices. After she shared an Instagram post about leaving Alessi for the first time (which sparked online criticism), Arie defended Lauren going out without their baby so soon after she was born. And at the same time, he made a very valuable point about parents taking care of themselves as well as their children.

It all started when Lauren posted a photo of her and her sister, Heather Burnham, posing in front of a colorful wall in Phoenix. "First time out of the house without Alessi and I only cried one time," she wrote. "I’d say it’s a win."

Although it seemed like a harmless post about hanging out with her sister, it led to a lot of backlash for Lauren in the comments from people who didn't think she should be leaving her baby so soon after birth. "Wow you left her faster then any mother I know," one commenter wrote. "Must of been for a good occasion." Others pointed out that they waited much longer before going anywhere without their children, with some writing that it had been years.

But after seeing all the negativity on Lauren's post, Arie left a comment of his own, defending his wife for getting out of the house without their child. He wrote:

"To all the negative comments regarding leaving her with grandma for a 45 minute lunch, cut her some slack! It was my idea because she has been working so hard to keep up and quite frankly I commend her for 1. Being an incredible mom and getting the breast feeding down enough to make sure she had enough while she was at lunch. (Moms know that breastfeeding can be difficult.) 2. So much of being a good parent is making sure you take care of yourself. She wanted a healthy meal with her sister who is in town. I get so frustrated at the comments because she is such a kind soul and takes these comments to heart. Be kind people!"

In another comment, Arie added, "You're doing great momma."

It's good that Lauren was able to get away for some quality time with her sister, and that she and Arie both recognize that self-care is so important, especially while adjusting to life with a new baby. This Bachelor couple may have been controversial when they first got together, but it seems like they've been nothing but supportive of each other, even as they've become parents.

And they've both been enjoying their time with Alessi, too — so far, they've both shared so many adorable photos of their daughter, like any proud parents would.

Good for Lauren for taking a break when she needed one, and good for Arie for sticking up for her. Being a new mom definitely isn't easy, but so far, it seems like she has a very supportive husband who is there for her every step of the way.