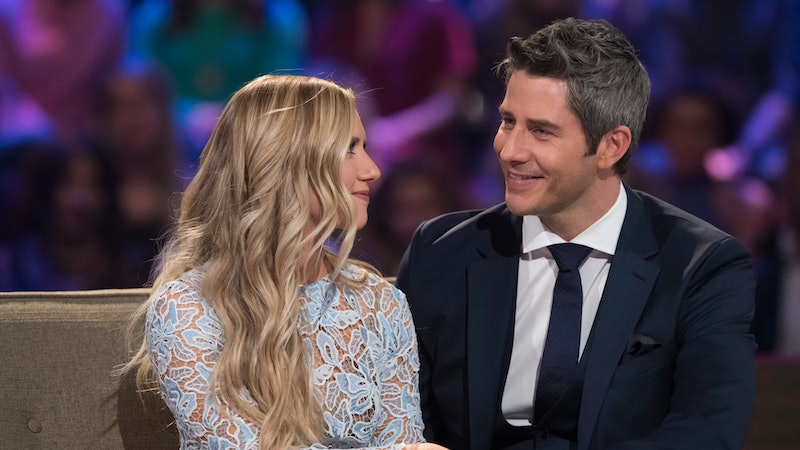 Lauren Burnham and Arie Luyendyk Jr.'s daughter Alessi was a social influencer straight out of the womb. She was born on May 29. And as of this moment, she has 294K followers on Instagram. However, she's actually starting anew. Her pre-birth account was so six days ago. Lauren and Arie's baby has a brand new Instagram account already.

Before she was even born, Alessi's parents ran the @babyluyendyk account. They continued posting on their daughter's behalf after Lauren gave birth, which makes sense since their friends, family, and Bachelor fans are so invested in the Luyendyk family. Their post-Bachelor life will be eternally fascinating to viewers of the reality TV franchise. Not only that, but who doesn't love looking at cute baby photos and videos?

Surprisingly, Lauren tagged a different account in a Wednesday, June 5 Instagram Story, @alessiluyendyk. No, the new parents didn't just change their daughter's handle. Instead they just made a whole new account. Did they not realize they could just rename an existing account and keep the existing posts and follower count? Maybe not. After all, the newborn lose nearly 300K followers by jumping ship to a new account.

One of Lauren's Instagram followers wondered if the couple would still post on the Baby Luyendyk page and asked the reality star for clarification. Lauren kind of cleared up the confusion. On Instagram Story, she shared,

"We'll still be posting on @babyluyendyk, love. We just wanted to make sure we saved her handle for her."

Saving the handle makes a lot of sense. Considering that Alessi's birth and name have been very public news, there are other people who might nab the username for a fan account. It would be nice if she had the option of using her own name as her handle if Instagram is still around by the time she becomes a full-fledged social media influencer.

However, it still doesn't quite make sense that they didn't just rename the first account to make the most of the existing momentum. Will they be posting from both accounts now? What exactly is the plan here?

Either way, on June 5, the Luyendyks posted a photo of Alessi mid-nap. She gained 6,000 followers on her new account during her slumber. Imagine taking a nap and accumulating 6,000 Instagram followers. Oh, the life of Bachelor offspring.

They probably should've consulted with Bachelor in Paradise alums Jade and Tanner Tolbert about the infant influencer life. The couple had an Instagram account before their daughter Emerson was born in August 2017. While Jade was pregnant, the account was called "Baby Janner." Once they announced their daughter's name, they redubbed the account "emmy_tolbert."

Now, Jade and Tanner are expecting their second child. Since they announced the pregnancy, the Tolberts have been providing updates via the Tiny Tolbert Instagram. Most likely, they'll do the same thing and just rename the account after their son is born.

Apparently, Lauren and Arie are not following this same path. Will they keep Baby Luyendyk as an account to document future pregnancies if they have any additional kids down the line? That would be a solid idea. It's a little bit unclear what their Instagram game plan is here. However, the Luyendyks are an adorable, loving family. Having four accounts to share updates about their lives is better than three.