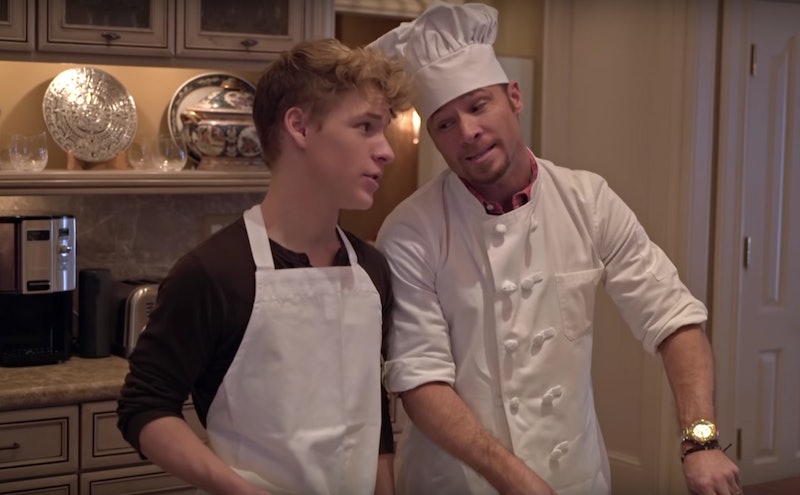 There's a new generation hitting the road to keep the Backstreet pride alive when their tour starts this summer. Brian Littrell's son will be the opening act on the Backstreet Boys' DNA World Tour, which will officially make their new shows the most adorable family affair in pop music.

According to People, Baylee Littrell, a 16-year-old aspiring country singer, will perform during the North American leg of his father's tour, but it's far from the first time that Baylee has joined the Backstreet Boys on the road. In fact, it was during one of his visits backstage during one of the boy band's tours that Baylee knew he wanted to follow in his father's footsteps and pursue a career in music. "Since I was 6 years old, my dream has always been to go on tour," Baylee told People. "I wanted to do what my dad did."

"One of their shows — I think it was the tour after their album This Is Us from 2009 — they went out on the road and I remember right before they went on, I put on one of my dad’s jackets from one of his outfits in his dressing room and I stood in front of the mirror," the young singer recounted. "And now the opportunity to open for him and the guys is like that 6-year-old self standing in front of that mirror in his dressing room with his jacket on. It’s a dream come true."

In addition to inspiring his son to pursue his love of music, Littrell has also been incredibly involved in Baylee's career, including making a cameo appearance in his debut music video, "Don't Knock It." During his interview with People, Baylee revealed that the boy band icon also played a major role behind the scenes in the making of his debut album, which will be released this summer. "We’ve been developing this for the past year and my parents have been with me every step of the way," Baylee said.

"My mom, who’s my manager, she’s been working so hard and my dad has been there helping out with everything," he told People, explaining later that it was his parents who encouraged him to make country music. "I never expected to go into country music — I honestly thought it was going to be pop. My parents knew how much I loved country ... I said, 'I don’t think I’m going to be accepted. There’s not a 16-year-old in country.' And they said, 'You can be the first. Why don’t you change the game and why don’t we help you?'"

"My dad has always been my champion," Baylee told People in November. "So he’s always told me to just do what I want to do and follow my dreams, and to do my best and not overthink it. It’s really just taken so much pressure off." With his new gig opening for the Backstreet Boys on their next tour, it seems as if all of Baylee's dreams of musical superstardom are even closer to becoming a reality.

More like this
The Spice Girls Just Dropped A Brand New Music Video
By Sam Ramsden
20 Years Later, Kelly Clarkson & 'American Idol' Judges Reunite For Her Hollywood Walk Of Fame Star
By Radhika Menon
The Trailer For The Whitney Houston Biopic Has Twitter Feeling Heated
By Radhika Menon
Everything To Know About Taylor Swift’s 10th Studio Album, 'Midnights'
By Grace Wehniainen and Jake Viswanath
Get Even More From Bustle — Sign Up For The Newsletter