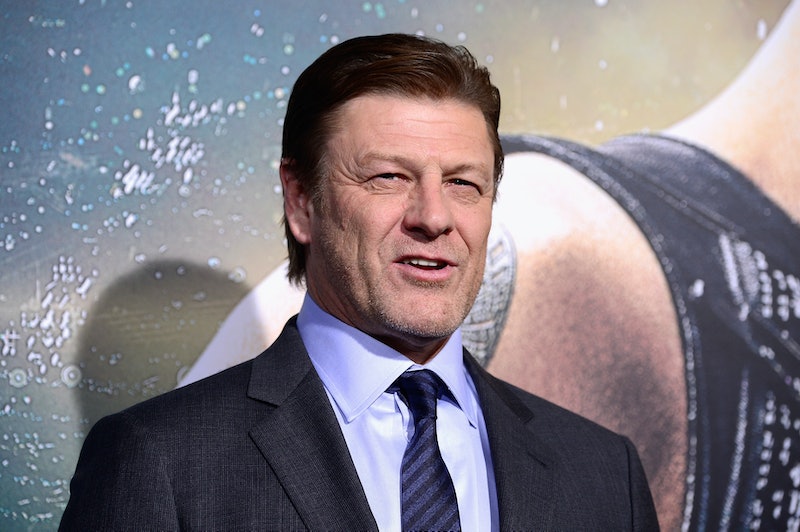 It's been years since Joffrey had Ned Stark killed on HBO's Game of Thrones, but to many fans, the shocking death still feels fresh. Actor Sean Bean's Game of Thrones comments about Ned Stark, the character he played to perfection in 2011, prove that he knows it. And to be honest, he seems to love it. In a lengthy interview with The Hollywood Reporter, Bean spoke about some of his upcoming and most iconic roles. Ned Stark's name came up more than once.

When THR asked "Why do you think Ned Stark is still so much in the public discourse, even though he was just in one season?" Bean said:

Yes. [Ned] is mentioned a lot. He still seems to have a presence on the show. It’s something I was really proud of, a really top-notch job. It’s either that or Boromir. It used to be Boromir, but now it's Stark.

For those nerdy enough to appreciate Game of Thrones, but never quite made it through Lord of The Rings, Boromir is another one of Bean's iconically doomed characters. Seriously, he's like a walking spoiler; Bean has perished on screen somewhere in the neighborhood of 30 times in his career. Even though he left Game of Thrones in 2011, he seemed more than happy to talk about his character in detail.

In the THR interview, Bean reflected on why the GoT characters — and popular culture in general — still feel so strongly about Ned Stark:

I think there are very few good people in Game of Thrones. [Ned] was a principled man, he was fair. He was a family man and he was also a warrior. He was well-respected by his family and the people he looked over. He applied that to his life in general, to his family, to everything he did. He came to realize being fair and being moral […] you’re not going to survive by doing that.

Of course, Ned Stark's most prominent quality, the sense of nobility that drove him, was ultimately his downfall. Well, that coupled with a murderous child king who had no right to the throne. But his unyielding nobility — particularly in the series' corrupted world — is one of the things Bean said he most appreciated about Ned.

He didn’t change. That’s what I admired about him. He stuck to his guns. He meant it. He meant his fairness and his good qualities. But I think once he went down south [to King's Landing], he didn’t really have much of a chance because, to them, backstabbing and treachery was a way of life. He was too honest, really.

One does not simply walk into a political rebellion, Ned.

It's true that Ned's honesty made him unable to play political games. It's also true that basically everyone in Westeros figured out how to manipulate it to their advantage. Perhaps that's why viewers identify so strongly with Lord Eddard: All he ever did was try his best to be his best, and he was killed before any of that could change.

Everyone gets to remember Ned Stark as The Best Guy, and the show's best first twist, and a memory of a simpler time — from before viewers even knew there'd be dragons. Still, for fans who hadn't read the George R. R. Martin series before the HBO show premiered in 2011, they probably should have guessed something was up when Bean nabbed the leading role. When does that guy ever live to see the credits roll?