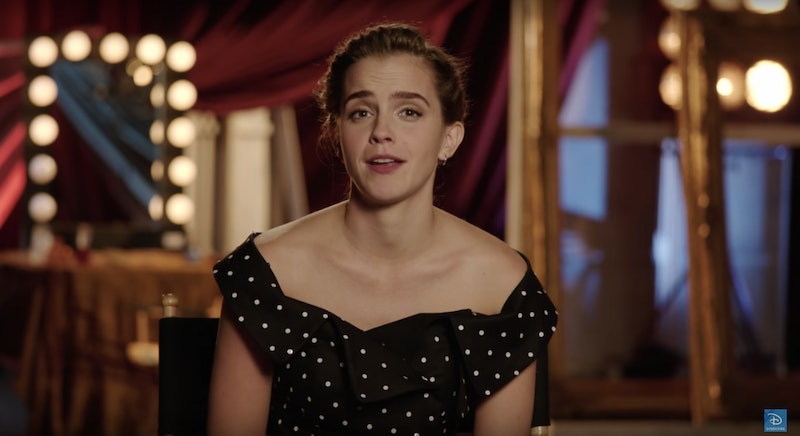 The 2017 live-action adaptation of the Disney classic Beauty and the Beast had no delay to the slay. Starring Emma Watson, who absolutely nailed the role of Belle, the film broke at least five major records, including the biggest debut for a female-fueled film, according to The Hollywood Reporter. It's been the highest-grossing movie of 2017 thus far — domestically, internationally, and worldwide — earning over $1 billion globally at the box office. All of this makes Beauty and the Beast the most successful live-action movie musical ever. But none of this could've happened without the go-getting, dedicated women who helped create it. Now, they're sharing inspirational words with young people who hope to follow in their footsteps.

In an exclusive clip, Watson introduces some of the team who helped make BATB so wonderful: production designer Sarah Greenwood, set decorator Katie Spencer, costume designer Jacqueline Durran, casting director Lucy Bevan, and film editor Virginia Katz. "There are several amazingly-talented women who worked on both sides of the camera to bring this movie to life," Watson says. "Their passion and determination inspired me."

From advice given by these ladies, to footage of young women working behind the scenes, the video will hopefully uplift people and encourage them to fight for their path in show business and beyond.

"I'm very much in favor of really encouraging whoever wants to come into the business," says Greenwood. Meanwhile, Katz encourages future filmmakers to get their hands dirty. She says,

"If you're a young person wanting to get into this business, learn whatever you need to learn. Be an apprentice, be an assistant. Just don't let somebody steer you from it because they think you can't do it, because if you can, then you can."

And who knows? Aspiring filmmakers watching may just create another successful version of Beauty and the Beast in the the future.

Beauty and the Beast is available on Blu-Ray and Digital HD on June 6.