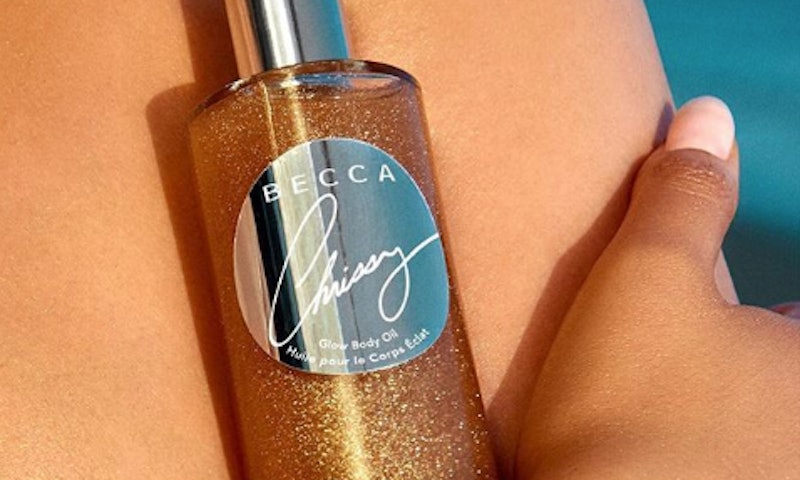 Stop what you're doing and get you wallets ready, because it is the summer of collabs. According to the brand's Instagram announcement, BECCA Cosmetics is teaming up with Chrissy Teigen again. Instead of a face palette, the two created a Glow Body Oil to get you ready for summer. There's no word on what the product looks like in action, but fans have some pretty great guesses.

If there's one thing pretty much every beauty lover is obsessed with besides Teigen, it's looking ultra-glowy. Highlighting has been a huge trend for years now, and brands are finding more ways to expand the trend. The BECCA x Chrissy Teigen Body Oil is proof of that. Although no details were givens just yet, the brand posted a photo of the product on Instagram with the caption "coming soon."

People might not know how soon, but they can see the glow just from the photo. According to the caption this oil is "straight from the beach," which pretty much means shimmery, healthy-looking skin all with one product. Think: all that after-glow without actually having to sit in the sun.

The shimmery, bronze oil comes in a bottle and might as well be known as a liquid highlighter. From the looks of this product, summer-ready skin just got a whole lot easier.

This isn't the first time that fans have seen the product though. BECCA Cosmetics posted a photo of the shimmery liquid a day before the big announcement. Although all the caption said was "Something's GLOWING to you soon! Are you ready for it?," people already had a feeling that the glow was created by Teigen.

The model-turned-social media star created the Glow Face Palette in May 2017. It had four shades of highlighter inside, as well as a giant mirror and gorgeous, durable case. Naturally, it went over pretty well. So much so that Teigen announced in April 2018 that another collab was coming. Hence why people already had a feeling that this ultra-glowy concoction was hers.

The brand has yet to announce how much the Body Oil will cost, but the past collab had a price tag of $46. If this Body Oil can give off a Teigen-level glow, it won't matter what it costs. Beauty lovers will find a way to get their hands on it.

With all new beauty launches comes wild speculation. Although there aren't any swatches yet, people are comparing it Rihanna's Fenty Body Lava. The liquid highlighter goes on like a lotion and leaves a sun-kissed glow. Sounds familiar?

People are hoping that the BECCA x Chrissy Teigen Body Oil is slightly more affordable than the $59 glow by Fenty Beauty. Here's what people have to say about the comparison.

It's not even out, and BECCA x Chrissy Teigen is already a summer staple.

The emojis say it all, my friends. All the happy tears and heart eyes for this collab.

All caps for the collab of the summer, please.

Suddenly people no longer know what Body Lava is.

Girl, you are never too old to fan girl. Kepe on doing what you're doing.

This is a rhetorical question, right?

It might not feel like summer yet, but Teigen is here to deliver it to you in a shimmery little bottle. If this is anything like fans think it will be, it's sure to be absolutely incredible. Now go ahead and continue to stalk BECCA's Instagram, because it's the only way to know exactly when, where, and how much the product will be.