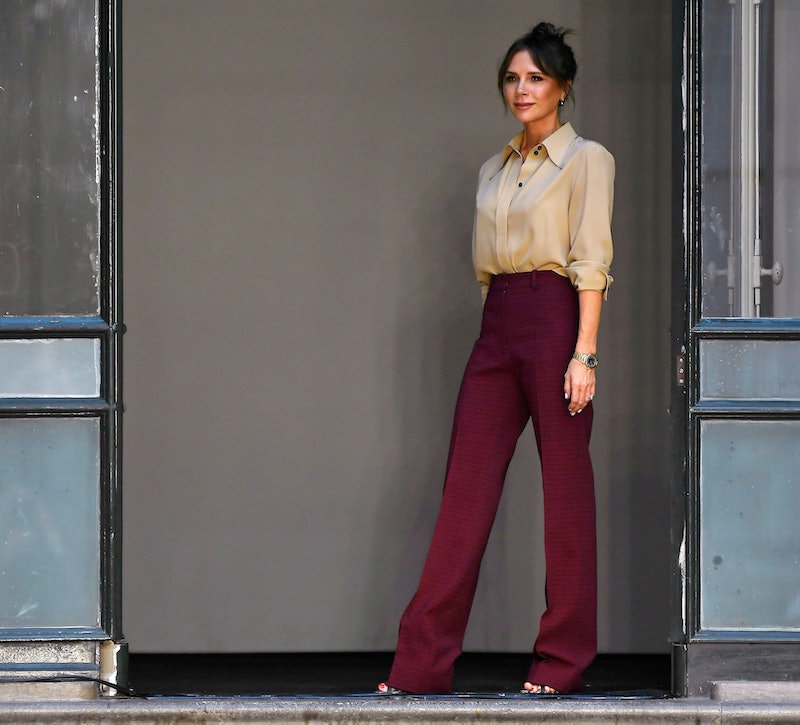 When Victoria Beckham moved her empire over to New York, London felt the loss. But now, the former Spice Girl and esteemed fashion designer is back in the English capital and she's brought her entire clan with her. On Sunday, the Beckham family turned out at London Fashion Week for Victoria's SS20 show, making for some truly adorable moments.

Naturally, the youngest member of the family stole the limelight. Harper, now eight years old, appeared front row next to Vogue editor Anna Wintour aka one of the most formidable women in the fashion industry. Most people would be terrified at the prospect of having to strike up a conversation with Wintour, but Harper found it a breeze. (As Metro reports, she has been attending fashion weeks since the tender age of four.)

Sitting on her dad's lap, Harper looked super cute in a high neck Victorian-style floral dress and metallic pumps. Before the show began, she was pictured backstage by her mum, getting some finishing touches to her look and mixing with the models. Dad David also showed some behind-the-scenes moments of Harper spending some quality time with big brother Brooklyn.

20-year-old Brooklyn was joined by his younger brothers, 17-year-old Romeo and 14-year-old Cruz, on the front row. But the five-strong Beckham family weren't the only famous faces to make an appearance. Billy Porter and Helen Mirren also showed up. Plus, per The Sun, Victoria's parents and sister Louise were photographed arriving along with David's mum, Sandra.

The weekend has been a real proud moment for the Beckham family. As well as celebrating Victoria's successful fashion brand, they also toasted the launch of her very own beauty brand. Victoria Beckham Beauty, which is now available online and in the designer's Dover Street store, aims to be a high-quality clean beauty brand.

Each month, a new category will be launched. The first, starting from £20, focuses on eyes with liners, eyeshadow palettes, and sparkly lustres. As the Guardian reports, products will contain no parabens or sulphates and will be packaged in eco-friendly materials. And when the 45-year-old eventually launches foundation, it will be available in 30 shades.

"It’s not about skincare that makes you look younger, it’s about being the best version of yourself," Victoria told the paper at London Fashion Week. "I always say that it’s about living a really healthy lifestyle. I like to have fun — I like a glass of wine and I like a glass of tequila — but I also really look after myself. I talk a lot on my channels about the vitamins I take, about the working out, about my whole lifestyle. So that’s what’s next — wellness."

In an interview with the Telegraph, Victoria said that Harper loves experimenting with makeup at home, and described her daughter as "a little tomboy."

She also spoke of her and David's 20th wedding anniversary celebrations in Paris, joking that she was worried they would have little to talk about: "I said to David, 'God, what will we have to say to each other when it’s just us?' But we talked and laughed the whole time, and not even about the kids or work."

"Hey, what a relief," the designer finished. "We’ll be OK, even when they’ve all left home." We stan team Beckham.

More like this
Kylie Jenner Joins The Bondage Trend In At Paris Fashion Week
By El Hunt
Kylie Jenner's Giant Lion Head Outfit Has A Deeper Meaning
By El Hunt
The Internet Can’t Get Enough Of Viktor & Rolf's Upside Down Dresses
By El Hunt
Every Single Thing In Maya Jama’s 'Love Island' Wardrobe
By Darshita Goyal
Get The Very Best Of Bustle/UK
Sign up for Bustle UK's twice-weekly newsletter, featuring the latest must-watch TV, moving personal stories, and expert advice on the hottest viral buys.