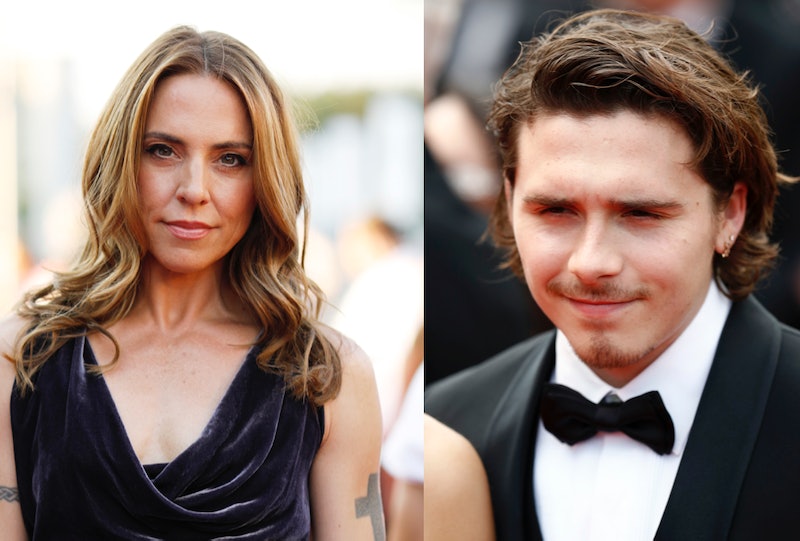 When you're not only the progeny of A-list parents, but a budding photographer who's worked for Rankin, and pretty handsome to boot, you aren't I imagine, starving for invites to red carpet events. And as London Fashion Week is in full swing, I'm sure Brooklyn Beckham has a whole smorgasbord to choose from. But you guys, Brooklyn Beckham and Mel C's London Fashion Week reunion and it was just about the cutest thing you'll ever see.

As the Metro reports, on Thursday, Brooklyn, the first born of David and Victoria Beckham, was at the Agent Provocateur Fashion Week party at London's famous Annabel's Private Members Club, where Mel C just happened to be DJing

The photos show Mel C spinning like a dang pro and living her best life when her old pal's first born rocks right up to the decks. It was straight away bye bye to that cool demeanour from Brooklyn as his whole Brooklyn's face lit up when he reached up to greet her. In return Mel C threw back a huge smile, thumbs up and the pair hold hands in a moment that say "OMG, no you're crying" and makes you want to call your auntie immediately. Just to remind her you think she's great.

The Metro reports that Mel C was DJing alongside top Sink The Pink drag queens with whom she has been touring over the summer.

According to the Metro, lots of other celebs were in attendance including Lily Allen, Ella Eyre, and Laura Whitmore. With other DJs like UK drag legend Jodie Harsh.

One particular attendee it might have been a bit awks for Brooklyn to run into was his on again off again GF Hana Cross. The pair seem to have cooled things recently but luckily no drama was reported at the event, so it seems like the pair are keeping things on good terms.

These sort of fashion parties are probably an old hat to Brooklyn at this stage because not only is his mum the actual fashion mogul that is Victoria Beckham and his dad the famous ex-footballer David Beckham, but he's also spent the summer interning with one of the world's foremost fashion photographers Rankin, at his London studios.

Victoria has, of course, been busy not only with her latest fashion collection, but also with launching her beauty and skincare range, which is due to drop this Saturday Sept 14. Huge news for not only fans of the designer, fans of beauty, but also for fans of products that are set to be more on the clean side, according to the few details that have been released about the line.

So I guess run ins like this with your Spice aunties are more and more likely with all of these fab events. And fingers crossed it will be one big reunion with not only the aunties but also all of the Spice Girls progeny at this year's Glastonbury festival, where it's rumoured they will be playing. Meanwhile, I'll be frantically trying to buy tickets.