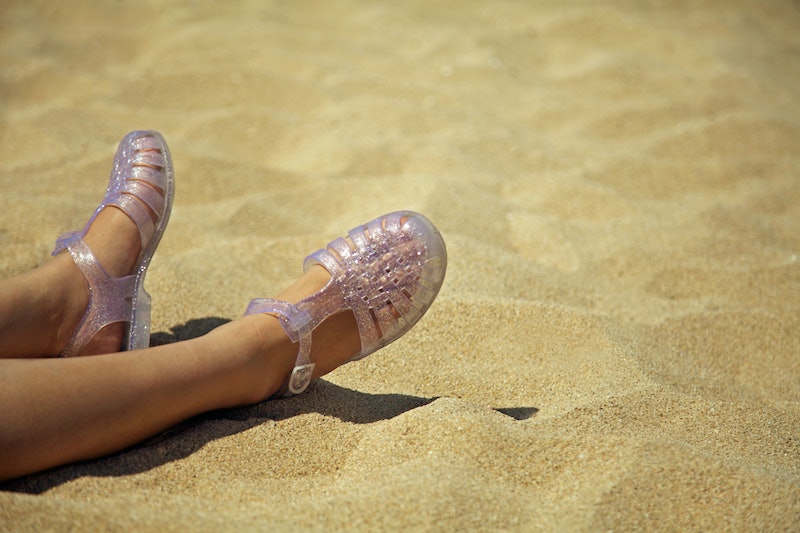 Now that most people have access to information about climate change and the general state of the environment, it's easy to label past actions as problematic. But a trend that probably should have died out is slowly making its way back into people's wardrobes. I'm talking about jelly shoes aka the footwear that will forever remind you of your childhood. If you want to get on board with the nostalgic look, it's sensible to opt for eco-friendly jelly shoes, seeing as the planet is dealing with a plastic crisis. Luckily, a few brands claim to sell non-harmful plastic footwear.

I say "claim" because it is difficult to prove some of the statements that are made by companies. For example, the majority of jelly shoes on the market are made from a type of plastic known as PVC. According to environmental organisation Greenpeace, PVC is the "single most environmentally damaging of all plastics."

The U.S. National Library of Medicine states that the plastic — which is found in everything from toys and food packaging to car parts — contains chemicals that "may have adverse health effects." Not only is the plastic potentially bad for people, but it can also harm the planet. As Metro reports, the process of producing it is not sustainable due to toxic ingredients like petroleum and chlorine. Plus, it isn't biodegradable, resulting in lots of tiny pieces polluting the earth and oceans.

These facts, however, haven't stopped the thirst for jelly shoes. Per the Guardian, searches for the sandal style have increased by 82 percent month-on-month on global fashion search platform Lyst. So what is a jelly lover to do?

Well, a few brands are seen as more sustainable than others. Melissa sells a wide range of jelly styles usually made from Melflex: a PVC formula that reportedly makes shoes "more comfy, flexible, and soft." Of course, this is still a form PVC, but it's what happens to the shoes at the end of their life that helps. Melissa buyers have said that the shoes do last a long time, meaning you won't have to buy new pairs as often. This could alleviate the amount of waste produced by regular shopping.

But, according to the brand, Melissa's designs are 100 percent recyclable, allowing them to be given a new lease of life when the original owner has had enough. The only issue is that PVC is almost never recycled in the UK and has the ability to contaminate other recycling, reports the BBC. Ending up on a landfill site is evidently not an eco-friendly ending, so the brand is planning to install a recycling collection scheme in all of its stores by the end of 2020, states the Guardian. (Currently, the Covent Garden store is the brand's recycling hotspot.)

Juju — another footwear brand that has been creating jelly shoes for over three decades ⁠— has a similar recycling issue. It says it sources its materials in England and grounds old shoes up to make new ones. But, if you can't recycle PVC in your local vicinity, you can send them back to the company for reuse, reports the Guardian.

Here are a few of the more sustainable jelly styles around.

Inspired by a Tokyo neighbourhood, the Daikanyama style mixes belt-like buckles with a patent black hue. Available in UK size 3 to 12.

First made in the '90s, these heeled jellies come in a huge range of colours including see-through styles and pastel shades. Available in UK size 3 to 8.

Reportedly created in 1946, this OG recyclable style is the one your parents probably bought you as a child. Available in UK size 3 to 8.

And remember: While their materials may not be the most environmentally friendly, you can help boost their eco credentials by ensuring a long and responsible lifespan.