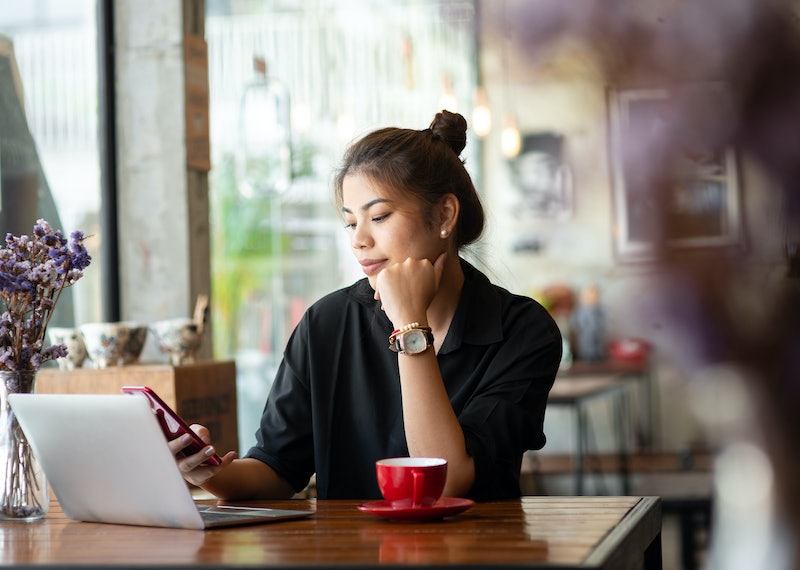 When we choose our jobs, we usually take a lot of factors into consideration — pay, skills required, talents utilized, overall potential to help save the world (or at least convince our parents that we are slightly competent). But even if we've spent hours fantasizing about our dream career, or taking those goofy high school career assessment tests ("If you enjoy hiking and the scent of freshly cut grass...you may want to become a park ranger!"), most of us haven't given enough thought to the ways that our jobs work with or against our personalities. Which is why a lot of people find personality tests — like the Myers-Briggs Type Indicator, a questionnaire based on the works of psychiatrist Carl Jung, or the Enneagram, a personality inventory system that's popular with both business management execs and aura-reading types — helpful in sketching out a broad version of their personality, which can help make the search for fulfilling work simpler.

I mean, just think: what if all that job-related angst you're feeling isn't because you're a slacker or because everyone who works there is a jerk, but just because your personality and your job are a bad match?

So, in the spirit of ensuring we're all happy in our jobs and our lives, I've broken down the nine personality types covered by the Enneagram (you can take a test to find out what Enneagram personality type you have here), and then provided some ideas about the best and worst jobs for each Enneagram type below.

Who They Are: Much like the Pilates device that shares their name, the Reformer is all about self-control and discipline. They're into rationality and clear sets of rules — but not in a creepy Spock kind of way; they just likes to work in situations that allow them to utilize their fine attention to detail and problem-solving abilities. They also loves jobs that give them a clear idea of whether or not they are actually doing a good job.

Who They Are: Warm, engaging, empathetic — The Helper is the person you want to be seated next to at a really awkward dinner party. Their heart is huge and their fascination with the lives of other human beings is genuine — which makes it important that they doesn't end up in a job that exploits their warmth or runs their sense of empathy ragged. Making other people happy makes them happy — which is why any job that involves constantly rejecting others will make mincemeat of their heart.

Who They Are: Your friend who somehow managed to turn knitting into a competitive sport? That's the Achiever. The Achiever isn't a jerk — they just have a sense of innate competitiveness, and feel their best when they know they're striving to be at the top of their game. A job that allows them to advance up a clearly delineated ladder via hard work will keep them happier than a lot of the flashy stuff that passes for "dream jobs" — and if their competitive needs are kept healthy and fed at work, they may be less prone to somehow turning your afternoon Buffy the Vampire Slayer marathon into a competition ("Who do you think was the best Buffy boyfriend? The answer is Angel, and here's why...").

Who They Are: The enneagram type most likely to be publicly moved to tears by Muzak around its neck, the Individualist is sensitive, artistic, and maybe just a touch temperamental. They thrive doing work that engages their capacity for self-expression, and for them, the hard work of a getting a creative career off the ground might be worth it — the struggle of getting by with a less-than-secure job might feel easy and breezy to them, whereas a secure gig with benefits at the world's third largest pen manufacturer might literally make them feel like they are dying (the Individualist should keep this in mind the next time their parents try to tell them that "going to law school is practically the same thing as becoming a professional writer!")

Who They Are: You know your friend who wants to know everything about your new phone, your new romantic partner, the new condos they're building across the street from your house, and also major historical events? That'd be the Investigator. This cerebral type loves to guzzle information like a fine wine — and I am sure the Investigator has a specific preferred vintage of wine they'd like their passion for knowledge to be compared to. They may not know everything they want out of life, but they learn everything they possibly can about the world around them.

Probable Nightmare Jobs: Publicist, waiter, bartender, retail worker, any kind of job where people regularly ream you out over stuff that is not actually your fault.

Who They Are: The Loyalist likes things the way they are, even if they don't like the actual things that are the way they are. The Loyalist is a worrier, which is why they may have trouble leaving a job that makes them unhappy but provides very clear support and structure. The Loyalist has been your ultimate friend since a week after you met them, and conveys their love for you through worrying. They also convey happiness, sadness, boredom, and occasionally gassiness through worrying.

Possible Dream Jobs: Writer, teacher, analyst, college professor, stand-up comedian, comics artist, activist, or anything where they can create something positive out of compulsive worry.

Probable Nightmare Jobs: Investment banker or any other kind of job that requires being comfortable regularly taking huge risks (especially the kind of risks that might make other people angry at her).

Who They Are: You want to be seated next to a Helper at a bad dinner party, but who do you want to be standing next to at a combination rave/burlesque show/16-course gourmet tasting menu dinner held in an abandoned subway station? The Enthusiast (who, let's be real, brought you along to this as their plus-one). This is your friend who makes other friends everywhere they go, is fueled by new experiences, and once, through a series of hilarious coincidences, spent Thanksgiving at Pitbull's house in Miami. The Enthusiast needs a job that can feed their lust for new experiences, cash in on their zest for living, and not crush them with its dullness.

Who They Are: If you're a Challenger, you kind of knew it before you even took the quiz, right? The Challenger loves to be the boss, but not because they're hung up on petty power trips — they just want the autonomy and freedom of not having a bunch of other bosses breathing down their neck. And honestly, no one should be breathing down their neck — jobs that involve a boss constantly micro-managing are bad news for people who are as assertive, self-confident, and decisive as the Challenger.

Probable Nightmare Jobs: Retail job with no growth potential, anything that involves being closely watched and filling out a lot of pointless busywork (i.e. most entry-level business jobs — don't worry, you'll get promoted soon, Challenger!).

Who They Are: The friend who was able to talk you out of fighting that guy at pub trivia who won by secretly looking at his phone? That's the Peacemaker. Optimistic and enthusiastic, the Peacemaker believes that we don't all have to act like meanies just to survive. They also believe that human beings have an innate capacity for goodness, and they don't care how alienating cynical folks might find that. They who they truly are, which is why they can be so chill about everyone else. They may also be your only friend who never had an AIM screenname like "xDARKNESSREIGNSx" in high school.

Probable Nightmare Jobs: Attorney, investment banker, anything that requires being aggressive to the point of antagonizing others.

More like this
How To Use Less Plastic To Help The Planet
By Carolyn Steber
15 Years Of The iPhone, In Pictures
By Emma Carey
Here's Your Daily Horoscope For June 30, 2022
By Mecca Woods
All The Astrological Events Happening In July 2022
By Nina Kahn
Get Even More From Bustle — Sign Up For The Newsletter

This article was originally published on Dec. 30, 2014