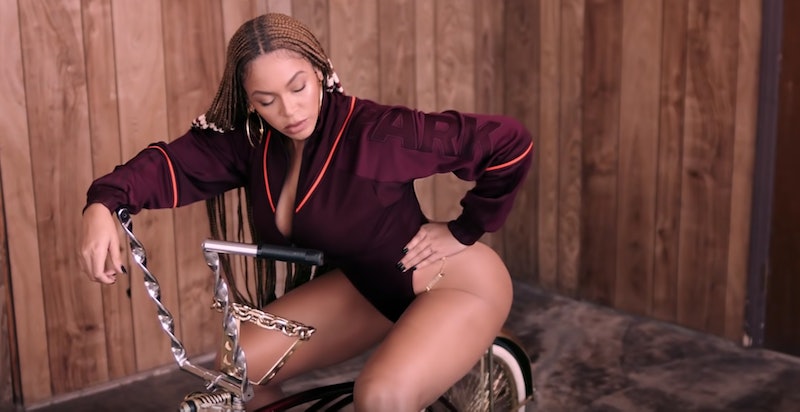 In a very unexpected turn of events, Twitter today had Beyoncé trending alongside a British supermarket. "Why?" you ask. Well, take one look at her latest collection, designed in collaboration with adidas. Does the burgundy background with orange accents remind you of anything? According to a chunk of Twitter, Beyoncé has just designed the next Sainsbury's uniform.

The memes have been flowing ever since images of Bey's designs dropped. Even Sainsbury's is in on the hilarity, angering the Beyhive with its very own meme. In fact, Beyoncé fans are so incensed they're arguing with the supermarket about who did it better. (Twitter: please remember it's a joke; a uniform is not a fashion statement.)

But Brits can't get enough of the comparison. Some are saying they physically cannot wear Beyoncé's collection as the Sainsbury's colours are too ingrained in their minds. One employee has even offered herself up as the face of the (fictional) Ivy Park x Sainsbury's collaboration.

If you can't be bothered to scroll through meme after meme, here's a round-up of the best ones to brighten up your Monday. And if you're planning to heavily invest in Queen B's Ivy Park, skip ahead. Because when you see it, you can't unsee it.

This is the one and only time a brand tweet will ever be included on a best memes list. Fact.

Can Beyoncé report to aisle 24?

Someone had the audacity to Photoshop Queen B into a Sainsbury's aisle. We have to stan.

The "I'm gonna tell my children" meme has found its best version yet. Let's hope later generations fully believe this.

Those pesky self checkouts

Sit back and imagine, for one second, this angelic woman sauntering up to you: a person literally sweating from the stress of dealing with the "please remove your item from the bagging area" message over and over again.

These jokes just write themselves, thanks to Beyoncé's spectacular shoot.

When you land a job at Sainsbury's

Clearly, the supermarket has got some stepping up to do. Ball's in your court, Sainsbury's.

Of course, they're going to work it while they can.

Obviously, Bey has a sense of humour. Her fandom may not be laughing, but she most certainly is. Especially as she's about to receive a lifetime supply of Nectar points.

More like this
The Internet Can’t Get Enough Of Viktor & Rolf's Upside Down Dresses
By El Hunt
Every Single Thing In Maya Jama’s 'Love Island' Wardrobe
By Darshita Goyal and Sophie McEvoy
Rita Ora Joined The Cut-Out Trend With These Bejewelled Butterfly Trousers
By El Hunt
Kate Middleton Wore The Ultimate '90s Power Suit
By Sam Ramsden
Get The Very Best Of Bustle/UK
Sign up for Bustle UK's twice-weekly newsletter, featuring the latest must-watch TV, moving personal stories, and expert advice on the hottest viral buys.