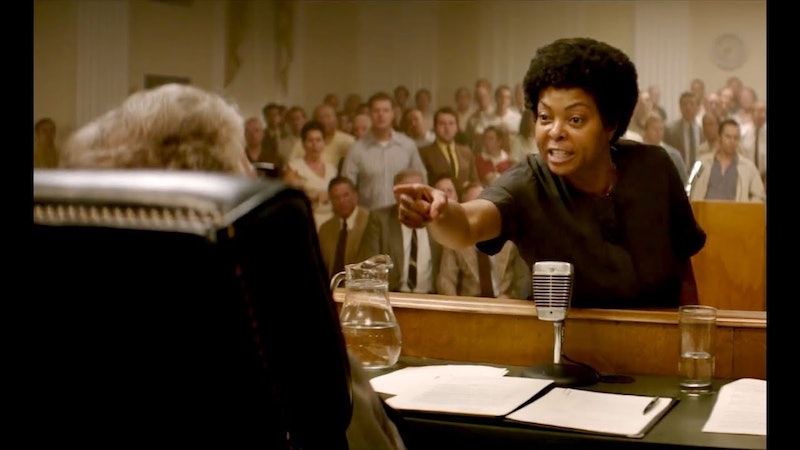 The concept of The Best Of Enemies, coming to theaters Apr. 5, sounds extremely unlikely — in North Carolina in the volatile '70s, a Ku Klux Klan leader and a single black mother team up for the sake of their town's kids. But that did actually happen. The Best of Enemies is based on a nonfiction book of the same title by Osha Gray Davidson, and the woman was Ann Atwater, who'd quit her household domestic job to lead the civil rights fight in their small town of Durham. So how and why did this unlikely duo end up not only working together, but remaining friends? In this The Best Of Enemies featurette, Taraji P. Henson (who plays Atwater) talks about the work women did — and can do — to better the world.

In 1971, the Durham community planned a 10-day meeting on school desegregation, per NPR. As representatives of their respective communities, Atwater was chosen to chair the meetings alongside C.P. Ellis (played in the movie by Sam Rockwell) , current grand exalted cyclops of the Durham Ku Klux Klan. "I didn't like integration. I didn't like the demonstrations downtown. I didn't like Ann boycotting stores. And she was an effective boycotter, too," Ellis told NPR in 1996. "She was making progress. I hated her guts." In 2005, the outlet played the tape of that interview for Atwater, who admitted that she felt the same. "I hated him just as hard as he hated me. And we showed that towards each other up until we went into the 10-day meeting," she said.

The Best Of Enemies follows the events of that 10-day meeting, where both grudgingly got to know each other. According to The Washington Post, Ellis brought his machine gun to the summit, and Atwater brought her Bible. Both came to recognize the humanity in the other, and once they saw it, Ellis couldn't in good conscience remain a member of the Klan, and Atwater ultimately met her goal of having schools more fully integrated.

Women, and black women especially, have been the main vectors for social change in America. Whether or not that's fair, it's historical fact, with the Civil Rights movement sprouting from grassroots activism pushed for and sustained by black women in their communities. For his part, Ellis seemingly did the work and met Ann halfway, both of them actually listening and paying attention to the people and situations around them. In an interview with Studs Terkel, Ellis said, "I’d go home at night and I’d have to wrestle with myself. I’d look at a black person walkin’ down the street, and they guy’d have ragged shoes or his clothes would be worn. That began to do somethin’ to me inside."

Henson notes in the featurette that "instead of meeting [Ellis] with hate, [Atwater] decided to become a solution." Compassion and empathy don't have to be gendered, but the featurette highlights Ann's willingness to focus on results, helping both her and Ellis to reach that middle ground.

But Ann Atwater's case was far from a picture of quiet stoicism and demure kindness — she doggedly, aggressively pursued goals of equality and fairness for her family and community. In the featurette, Henson describes her as a "powerhouse civil rights leader." Speaking to NPR interview, Atwater claimed if Ellis or any member of the committee said a wrong word her way, "I was going to knock the hell out of them with my Bible." And for those wondering how someone could have the patience to withstand such blatant racism, Ann sometimes didn't.

In a piece she wrote for the Durham Herald Sun, per School For Conversion, Atwater said that just a few years before they worked together, she'd planned on killing Ellis when he repeatedly yelled the n-word during a meeting. "I pulled out the knife that I kept in my hand bag and opened the blade. As soon as he got close to me, I was going to grab his head from behind and cut him from ear to ear... Nothing but God’s grace and mercy kept me from killing that man..."

The Best of Enemies has stirred up some controversy ahead of its premiere, however. Shadow And Act noted negative and skeptical reactions to the trailer on Twitter, with some users asking why they should watch a movie that humanizes a KKK member and others resenting the implication that the burden should fall entirely on oppressed communities to change their oppressor's minds.

But speaking to NPR, Atwater marveled at what she accomplished in her time with Ellis, attributing it to a higher power. "If I look back at it through my Bible... God had a plan for both of us. And that plan was to put us there to make sure that this school integration would be done peacefully, and that's what happened." She also mentioned that they remained friends through the years, and per The Los Angeles Times, she even spoke at his funeral in 2005. Atwater herself passed away in 2016, but with The Best of Enemies, her local pursuit of justice and fairness will get a worldwide audience.