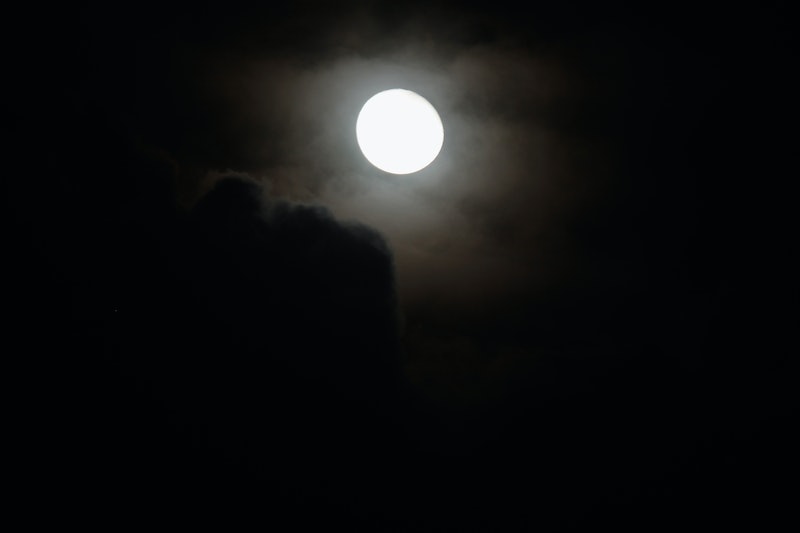 If you're anything like me, you may have felt a little let down by the cosmos recently. Mercury was in retrograde for much of the holiday season, making the pre-Christmas chaos feel all the more chaotic — and just when I thought the mental fog would lift, I found out that Mercury's post-retrograde shadow period can wreak its own kind of havoc on my day-to-day life. Everywhere I looked, I saw that Dec. 21, 2017 would be the unluckiest day basically ever — and for no other reason than the stars said it was so. The next astronomical event that I'm seeing on the calendar — January's full moon — doesn't seem to have any foreboding predictions attached to it, so I, for one, am anxious to get all the details on the best time to see the 2018 full wolf moon.

First, a little background on what this wolf moon business is all about. Like the well-know harvest moon, the wolf moon is an annual full moon named according to the season in which it falls. The January full moon's nickname is rooted in Native American and medieval European history, according to National Geographic. Centuries ago, our forbearers would wake in the middle of January nights to the sound of hungry wolves howling at the moon, lamenting the lack of food available for them in the cold winter months. As a result, the yearly January full moon became inextricably linked to wolves.

The 2018 wolf moon will rise about as early in the new year as you can get — on Jan. 1 at 9:24 p.m. EST, per the Farmer's Almanac. As your New Year's hangover dissipates and the ultimate returning-to-work-after-the-holidays anxiety sets in, you'll be able to peek out your window and see quite a sight in the sky. Full moons are generally pretty beautiful, but 2018's wolf moon also happen to be a supermoon, which means it will make even more of a stunning visual impact.

According to the Farmer's Almanac, "supermoon" is a catchy name assigned to full moons that orbit closer to the Earth than most other full moons. It's not an official scientific term — astronomers actually refer to these moons as "perigee full Moon" or "perigee syzyzy" — but it does tend to stir up a lot of excitement both in and outside of the scientific community. Because supermoons orbit so close to our own planet, they tend to appear much bigger and brighter than your standard full moon. At its most extreme, a supermoon like the one we're about to experience can be 14 percent closer and therefore look 14 percent larger than at its farthest yearly extreme, per Farmer's Almanac.

Thanks to its proximity to us, it should be pretty easy for you to catch a glimpse of the Jan. 1 wolf moon when it rises shortly before 10 p.m. EST. If you're anxious to see it, Farmer's Almanac simply recommends that you keep an eye on the moon as it's rising. Yes, it's really that easy. Because of what's known as the moon illusion — a phenomenon that makes our minds exaggerate the size of objects near the skyline — the full moon should look extraordinarily big. You should have no problem capturing it on your camera for the ultimate astronomical Insta post.

Regardless of when they rise, full moons of all kinds are known to represent new beginnings, so the New Year's Day timing really couldn't be better. Grab yourself a snack, slip on your favorite sweatpants, and prepare to watch a truly beautiful moon rise in the sky — the perfect symbol of the new year ahead.

More like this
The Summer Solstice Spiritual Meaning, Explained
By Jessica Booth and Brittany Beringer
Your July 2022 Monthly Tarot Reading
By Jezmina Von Thiele
Here’s Your Horoscope For July 2022
By Alexandria Lettman
Are Cancer & Cancer Compatible In A Relationship?
By Kristine Fellizar
Get Even More From Bustle — Sign Up For The Newsletter