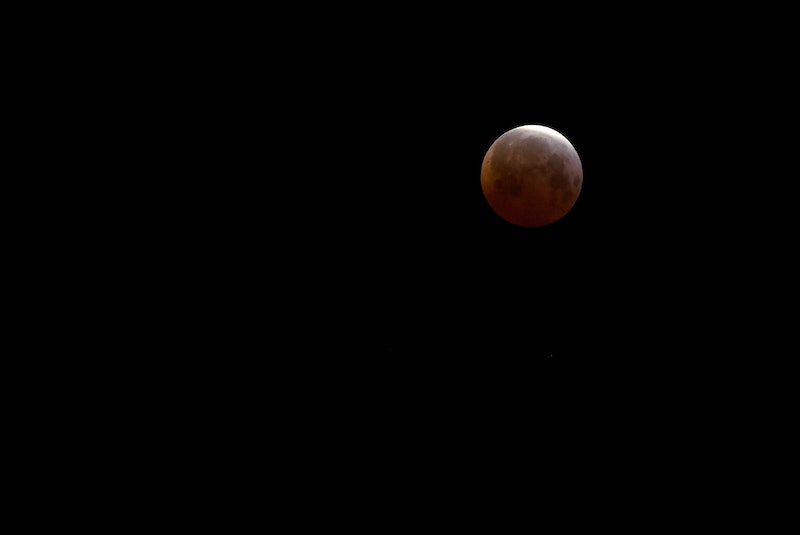 The end of April will be a time to celebrate, and not just because it means tax season is well and good behind us. The conclusion of the month will also bring us a full moon called the pink moon. Do you already know the best time to see the April 2018 full moon? Here's when you can catch it.

Although the moon will already appear full a day before the big event (and a day after, as a matter of fact), it's only technically full when it's precisely on the opposite side of the earth, relative to the sun, notes Space.com. Of course, the time you will see it depends on your location. If you're on the east side of the country, you will see the pink moon rise at 7:31 p.m. Eastern on Sunday, April 29. The sun will stick around for about another 20 minutes before it sets. The full moon will hit its peak at 8:58 p.m. Eastern time — so that's when you'll get the best show.

Stargazers in Kansas should look to the sky at 7:58 p.m. Central, says Time and Date. If you're further west, like Nevada, head outside around 5:58 p.m. Pacific for the grand finale. That'll be 6:58 p.m. MDT.

Like other full moons, the pink moon is special in its own right. The Old Farmer's Almanac explains it was the Native Americans who initially came up with the name for this specific full moon — also calling it the sprouting grass moon, egg moon, and fish moon — and later passed it along to Colonial Americans. The name comes from the moss pink, one of the first flowers to bloom in spring, although don't expect the moon to actually be pink. While the first official day of spring (AKA the spring equinox) was on March 20 this year, the pink moon is yet another sign that warmer weather and sunnier days have arrived.

Aside from being a gorgeous sight to behold, April's pink moon carries some serious weight astrologically, too. Intuitive Astrology notes the moon falls in the sign of Scorpio, which means it will be a time of transformations, ideal for letting things go that no longer add something positive to your life. "Scorpio represents death, rebirth, and unconditional love. It also represents the stages of consciousness, or the peeling back of layers. At the core layer, Scorpio energy brings us the power of unconditional love, but on the surface layers, Scorpio can bring us ego and greed."

It might sound like more doom and gloom than anything else, but rest assured there is much to be gained from the pink moon, like better relationships, making self-care a priority, advancements in the workplace, and an overall improvement in your wellness and wellbeing. It all comes down to what your intentions are.

Also, don't forget the meaning of the full moon, in general. While it's stereotypically viewed as a time when everyone goes bananas, it's not quite that simple. Prana World explains it's a "time of greater activity, opportunity and development." What's Your Sign says it's the height of power and clarity, and the fulfillment of your desires. In other words, be mindful with your thoughts and actions. All things, good and bad, are magnified, making it important to be positive and deliberate in your intentions. Do your best to avoid anything that could be emotionally conflicting, because the full moon could possibly make things feel even more dramatic than they are.

Whether or not astrology is your jam, the pink moon promises to be an Instagram-worthy moment you won't want to miss. Set your alarm, get your camera ready, and head outdoors to see April's glorious full moon.

More like this
13 Summer Solstice Quotes To Celebrate The Longest Day Of The Year
By Sadie Trombetta
The Summer Solstice Spiritual Meaning, Explained
By Jessica Booth and Brittany Beringer
Your July 2022 Monthly Tarot Reading
By Jezmina Von Thiele
Here’s Your Horoscope For July 2022
By Alexandria Lettman
Get Even More From Bustle — Sign Up For The Newsletter