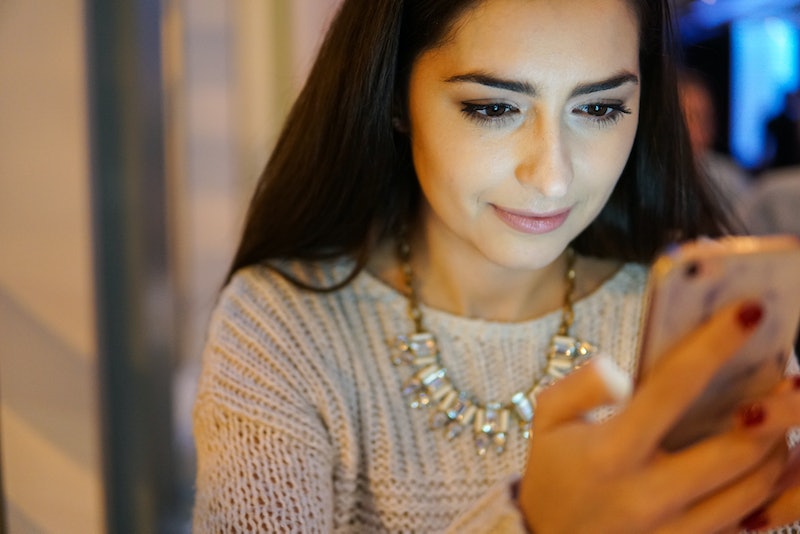 If you're looking to level up your texting game, you might want to take a look at the emojis you're using. Dating app Clover, conducted a study to see which emojis received the most replies — and the least. Let's just say, an eggplant and a happy pile of poop aren't going to get you very far. But a simple smirk and a wink will.

Clover analyzed data from three million of its users and found that 10 percent of conversations begin with messages containing an emoji and it might help you get better results or even more responses if you haven't had much luck. According to the study, women are five percent more likely to respond to an opening message that has an emoji in it. If you're thinking men are less likely to use or be into emojis, they actually seem to like it even more. Men replied to opening messages eight percent more often when an emoji was used.

While the most successful singles on the app use emojis to flirt and showcase their sense of humor, don't go thinking just any emoji will do. These are the best and worst emojis to send someone you're looking to date:

The Emojis Women Reply To:

The top four emojis women respond to are the sassy girl 💁, the hungry face 😋, the tongue-out face 😛 and the smirk 😏 .

But don't expect to get anywhere by using the eggplant 🍆 , clapping hands 👏 , flexed biceps 💪 , or the fist bump 👊 . Those four emojis are least likely to get a response.

The Emojis Men Reply To:

The best emojis to send men are the smirking face 😏 , the crazy face 😜, the LOL 😂 , and the relieved face 😌.

But don't expect a response, or at least a positive one, if you're sending them a Vulcan salute🖖, a ring 💍, the crying face 😢, or a poop emoji 💩 .

Adding emojis to your messages can bring a lot of personality to your conversation. It can also make flirting with someone you're interested in a lot more fun. With so many different ones to choose from, you can go all out and be creative. But to up your chances of getting a response, keep it simple... and stay clear of the poop.