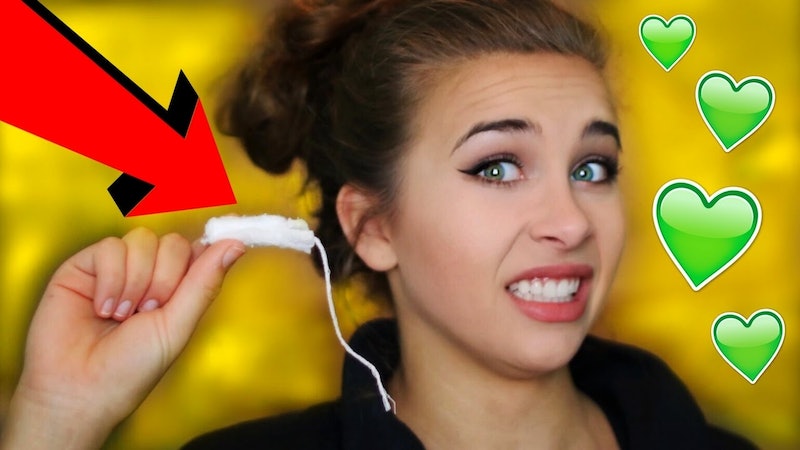 No one is safe nowadays. A lunch break Facebook scroll seems innocent at first — and then, it strikes. It's yet another beauty trend video, but this time around, dripping in pure clickbait and gimmicky goodness. From using condoms to apply makeup (!?) to the black highlighter of every 2007 scene queen dream, the internet is laden with viral beauty trends — some questionable, some worth the hype and perhaps some in between.

Once a beauty trend infiltrates the web, there is no cure — just dangerous, dangerous circulation. Suddenly, your Instagram feed is congested with 60-second tutorials of the same look. Every article recycles the same headline, enticing readers for the magic click. In the YouTube sphere, beauty vloggers pull an Amazing Race to see who will be the first to upload the experiment video because, after all: views are ~the~ most valuable form of social currency.

We're only four months into 2017, yet viral beauty trends are pushing boundaries already. At this rate, the makeup front could be radically different even just a month from now — bizarre beauty hacks, summer edition anyone? Either way, I'm mentally preparing myself for the next round.

If Drive/Blade Runner/Spring Breakers were a makeup trend, it would without a doubt be neon eyeliner. It's visually striking and surprisingly easy to create — the secret weapons are neon shadow, a pointed liner brush and a buffing brush. Optional: pair with the very appropriate (and genius) Neon Demon soundtrack.

2. The Worst: Using A Condom To Apply Makeup

I wanted to believe this was a Clickhole/Reductress-type stunt, but alas, condom makeup application is alive and well in the reality (trust me, I truly did). Supposedly, wrapping a condom around a Beauty Blender makes for smooth, blendable application — any brave souls want to give this a go and report back on your findings?

When Home Depot meets Sephora, you get the one and only steel mascara wand. After Hourglass recently dropped its Curator Lash Instrument — a $78 stainless steel wand designed to give you full 360° range to evenly coat lashes — some debated whether or not it would be cheaper to simply apply mascara using an ~actual~ screw. I don't know about you, but the thought of a screw-like contraption near my eyes is just bait for a horror movie scene.

4. The Worst: Using A Tampon To Apply Makeup

Similar to its condom counterpart, tampon makeup application has now hit the internet shelves. If we're following a trend here, what's next — hacks to blending foundation with an IUD?

Kailijumei's dreamy Flower Jelly Lipsticks have all the qualities of a sensational beauty trend: namely, it's a lipstick, it's Insta-worthy, decked out in gold specks and flowers — and did I mention how Instagrammable these tubes are?

For a while, I could not escape the plague of painful face mask peel videos. Everywhere I went — Facebook, Twitter, Instagram, YouTube — I was forced into an auto-play vid of some unfortunate girl viciously ripping mask remnants off her face and/or body. Suffering for art at its finest.

If the condom or tampon route isn't up your alley, then meet MakeupDrop's Silicone Makeup Applicator: designed for flawless makeup and skincare application without absorbing even one drop. According to the site, you only need to use half of the amount of product as compared to the traditional sponge or brush applicator. Looks like the Beauty Blender might just be dethroned in a matter's time...

Promise me you won't judge me for this, but I'm seriously digging the butt glitter trend — namely because blinged out booties would be a perfect addition for festival season. Viva la glitz.

9. The Best: Lipstick For Your Vulva

Sure, maintaining your pout is important, but don't forget to tend to your other lips too — yes, that one downstairs. From VMAGIC comes the Feminine Lips Stick, a 100% natural care cream for your vulva. It's free of dyes, fragrances, hormones, parabens and synthetic preservatives and perfect for remedying your V-troubles. Super-powers include balancing pH, restoring moisture and chafe prevention.

10. The Best And Worst: Black Highlighter

Stay with me here: isn't black highlighter essentially bronzer? Isn't the purpose of a highlighter to ~illuminate~? When I first heard about Rituel de Fille's new black Inner Glow Crème Pigment, I could only imagine two inky black streaks down my cheekbones. Yet, at the same time, the concept of a jet-black highlighter sounds very Cool Edgy Girl™. I'm torn on how I feel.

Never underestimate the power of the 'net and a viral beauty trend.