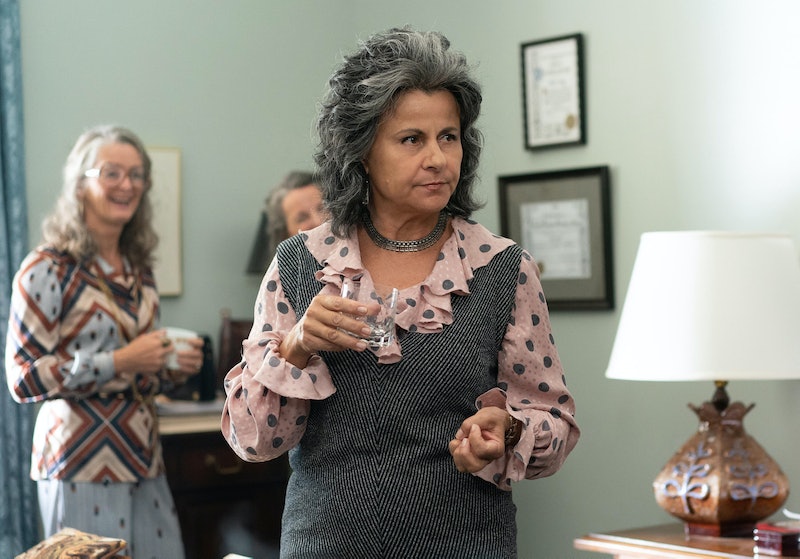 Phyllis Schlafly's image as a wholesome homemaker and poised mother of six was instrumental in her Stop ERA campaign gaining steam against divorced feminist activists like Betty Friedan. Friedan, who is shown to have a fiery personality in Mrs. America, lost her cool during a May 1973 debate between Friedan and Schlafly at Illinois State University. Though the debate received little media coverage in real life, Schlafly's calm demeanor in the face of Friedan's outburst led to more support for Schlafly's campaign, while supporters of the ERA were labeled as "intemperate."

In Episode 4, Friedan agrees to debate Schlafly — not only because she considers Schlafly a real threat, but to regain the respect and renown she feels she's lost to younger activists like Gloria Steinem. The debate does not go in Friedan's favor, though. When Friedan asserts the benefits of a constitutional amendment that would ban gender discrimination, Schlafly pushes back, declaring that American women are “the luckiest class of people on Earth.”

“You simply cannot legislate universal sympathy for the middle-aged woman,” Schlafly says, aware that Friedan is divorced. “You, Mrs. Friedan, are the unhappiest woman I have ever met.”

This sets Friedan off, and she declares mid-debate that Schlafly is "a traitor to your sex, an Aunt Tom," calling forth a distasteful racial caricature. She also calls Schlafly a witch, and says, "God, I’d like to burn you at the stake!"

In response, Schlafly calmly says that she's glad for Friedan's insults, as it "just shows the intemperate nature of proponents of ERA."

Friedan's statements would prove to have a damaging effect on the ERA movement, as Schlafly and her campaign successfully walked out of the debate looking like the more reasonable party to back. Though footage or transcripts of the full debate are difficult to find, Friedan's insult lived on in infamy, even while the liberal women's movement continued to be belittled and downplayed in the media and society at large. In the May 3, 1973 New York Times edition, for example, the debate is only mentioned in passing under the last page's "Notes on People" section above a flower ad. It paints Schlafly in a favorable light by highlighting Friedan's "Aunt Tom" insult at the beginning, and ends the paragraph with Schlafly's "intemperate" comment.

Similarly, The Times of Northwest Indiana put Friedan and Schlafly's Bloomington debate on page 23, and it almost appears as a footnote next to several gigantic ads for discount department stores, shoes, and margarine. Friedan's "Aunt Tom" insult again begins the clip, and it again ends on a more flattering note for Schlafly, quoting her as saying, "You have a wonderful position as women. Don't knock it. You've never had it so good."

The message and placement of both stories was clear: mothers and homemakers should see Friedan as attacking their way of life, while Schlafly was defending them. At the same time, the fact that the debate — arguably a remarkable accomplishment for Schlafly — was relegated to the back of the paper exemplified exactly why women like Friedan and Steinem were fighting for more rights and respect on par with men.

Though Friedan's fiery comment may have won over some readers, it ultimately seemed to have alienated others. In a 1973 letter to Louisiana's paper The Town Talk, for example, a reader wrote that she supported Schlafly because she "presents her arguments in a calm, clear, and thoughtful manner." She was turned off by Schlafly's opponents, meanwhile, because their "usual offensive is to resort to a personal attack, principally by hurling popular, but meaningless labels at her."

With Schlafly's legacy paving the way for today's Republican party platform, it's hard not to draw similarities between the backlash that Friedan's "Aunt Tom" comments inspired to the one that Hillary Clinton's 2016 "basket of deplorables" caused. Friedan's comment may have been borne out of understandable frustration, but her poorly worded outburst was just one of many missteps that led to Schlafly eventually successfully defeating the ratification of the Equal Rights Amendment.