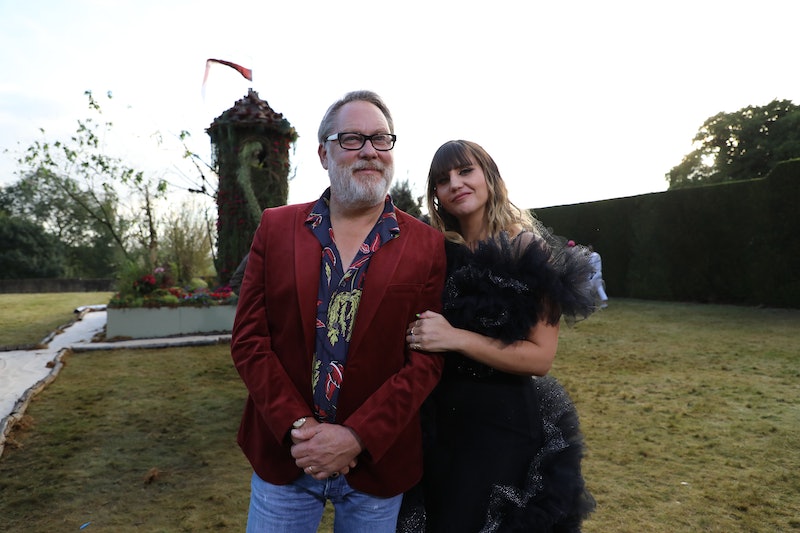 Netflix's new gardening competition show is already getting Great British Bake Off comparisons, which would make The Big Flower Fight's hosts Natasia Demetriou and Vic Reeves sort of like this show's version of hosts Sandi Toksvig and Noel Fielding. Demetriou and Reeves are there to be a charming, funny conduit between the competition and the viewers, so it's pretty relatable that the hosts don't have very green thumbs themselves.

Reeves called himself "a complete gardening novice" in an interview with the Evening Standard. He relies on a professional gardener to bring his own visions to life. "I just give instructions," Reeves admitted. "I'd applaud myself if I got the name of something simple right like a begonia."

Demetriou gave gardening herself a try, moving a bunch of plants onto the balcony of her new place. "Within a day everything was dead," the actor told iNews. "I have all the enthusiasm I need, though. I FaceTimed Vic [Reeves] and he asked to see my garden, but he had to put the phone down because he was laughing so much." Now, Demetriou is taking things back to basics, telling the outlet that she wants to start growing her plants from seedlings. "We'll see how that goes," she said.

Despite their lack of floral or gardening knowledge, the pair make great hosts because they just click together. This was Demetriou's first time hosting anything, and she signed on partially because of Reeves. "As soon as they told me Vic was involved, I was 100 percent all in," she told the I paper. The duo got along almost immediately. "The first thing he said made me really laugh and we just didn’t stop chatting for the whole first day," Demetriou added. "I swear there could be a second show of me just following him around, laughing at him speaking with silly voices."

The love goes both ways, with Reeves raving about Demetriou in another interview with iNews. "She's brilliant, we hit it off immediately," he said.

Before The Big Flower Fight, Demetriou was best known for FX's vampire mockumentary What We Do in the Shadows and the British series Stath Lets Flats. The actor told the New York Post that this was a lot different than any of her previous acting roles. "TV presenting is not so easy. I've only done stuff where it's scripted, so everything you say is pre-decided," she said. "Whereas when it's just you, and you accidentally say something like, 'Oh look, that flower is red!,' you’re like, 'Well, that's the stupidest thing I’ve ever said' and now it's in the show!"

For his part, Reeves is a comedic legend and one half the duo Vic and Bob with fellow comedian Bob Mortimer. So hosting a flower sculpture contest was a new undertaking for both of them, but between their chemistry and their funny, novice takes on gardening, the audience will be able to relate to them instantly — perhaps even enough for Netflix to greenlight a Season 2.