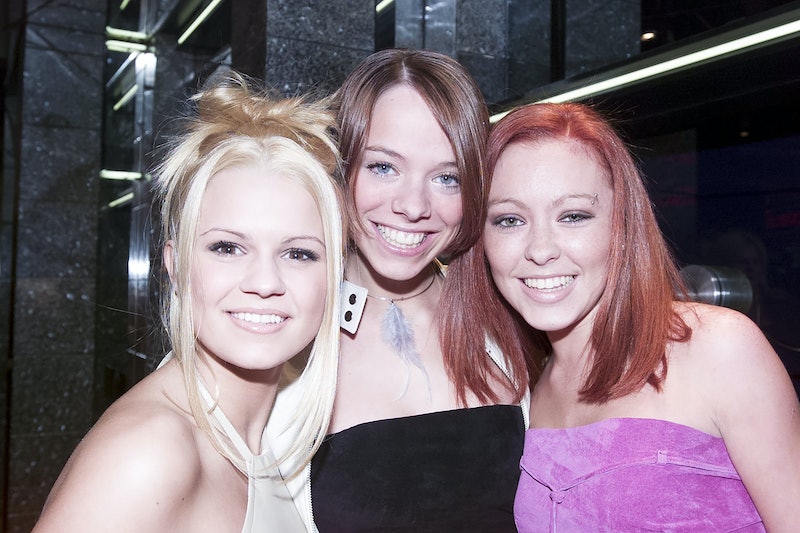 Nothing says girl power like a girl band. A group of (hopefully) BFFs getting together to sing and perform. Delighting the world with some catchy as hell lyrics, dance moves you attempt to emulate, and of course — steez to die for. There is no doubting that several of the biggest hitters instantly some to mind, but have you ever wondered who tops the bill? What are the UK's biggest hit girlbands?

Number one is about as easy to guess as they come. Topping the most successful song is of course, Spice Girls with their smash hit "Wannabe". A song that heralded the beginning of a whole movement; of girl power, iconic outfits, picking which spice you are, and gravity defying platform trainers. The BBC reports that according to the list of the top 100 girl group singles of the last 25 years, compiled by the Official Charts Company, our gals come out on top.

Since 1996, "Wannabe" has sold a stonking 1.7 million copies. Which is absolutely fair because that song is lit AF. Their song "2 Becomes 1" comes in at number eight on the list. A song which maybe you didn't get what it meant when it came out but now you are like, "OMG, filth."

Speaking about the achievement, the girls couldn't hide how ecstatic they are and were super grateful for the recognition.

"This is so incredible - we can't believe it! The last couple of weeks have been magical. To be back together and celebrating with all our fans is an absolute joy. It's phenomenal that over 20 years later our music and message still resonates with so many people. This band, the Spice Girls belongs to everyone. Not just five girls, it belongs to eight billion people, and everyone is welcome. Thank you from the bottom of our hearts for making our dreams come true - we love you all."

Coming in second, and deservedly so, is Little Mix. They are icons. Not only is their music unbelievable, there's also their female empowerment message with songs like "Shout Out To My Ex" which came in at number two on the list. Little Mix, who featured in our recent music issue, are actually the biggest hitters on the list. They have not one but three songs on the list — "Black Magic" and "Touch" come in at five and seven respectively.

In third place on the list was All Saints with "Never Ever," a song which catapulted the group into huge international success. Their sound felt a lot more sleek and grown up than anything else out at the time, and it's still a banger.

Excellent examples of some newer bands that feature in the top ten list include Fifth Harmony with "Work From Home" proving that guys, there is a lot of room for new and exciting female acts in the future.

The other bands on the list — TLC, B*Witched, and Atomic Kitten — prove what we all already know: the '90s were the golden age for girl bands.