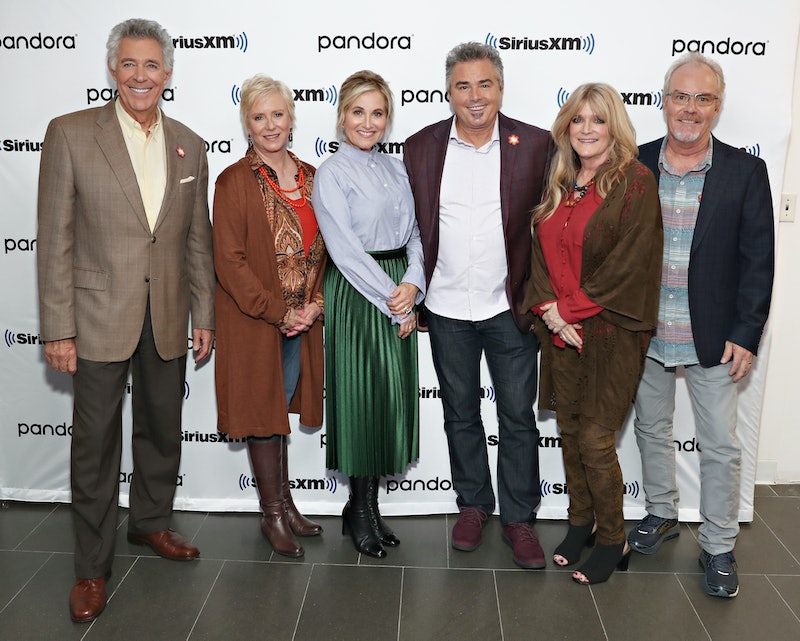 Here's the story of how an HGTV Brady Bunch holiday special will reunite the cast for their first holiday together, following a 15-year hiatus from appearing on TV as a group. A Very Brady Renovation: Holiday Edition will include all six Brady siblings: Barry Williams (Greg), Maureen McCormick (Marcia), Christopher Knight (Peter), Eve Plumb (Jan), Mike Lookinland (Bobby), and Susan Olsen (Cindy), per an Oct. 16 press release. In the HGTV and Food Network crossover, the cast will both "whip up 70's-inspired treats, including fondue-style potatoes, a gelatin fruit salad and "santapes" as well as "create retro DIY decorations to adorn the home in festive Brady Bunch style."

The episode — premiering Dec. 16 at 10 p.m. ET/PT on HGTV — will also feature The Pioneer Woman's Ree Drummond and Hidden Potential's Jasmine Roth, according to the network. A sample DIY holiday project the group will undertake is said to include transforming shutters into life-size toy soldier lawn decorations. After the onscreen siblings from the classic 1969-74 TV series assist Drummond "prep the feast in the famous orange-and-green kitchen," they'll also share a celebratory meal.

The big Brady Bunch onscreen cast reunion came when HGTV premiered the four-episode A Very Brady Renovation in Sept., bringing the former costars together to help overhaul the Studio City, CA home that served as the facade of the Brady's house in the original series. (All the interior Brady Bunch scenes were filmed on a soundstage, according to People.) In addition to Roth, other cast members include: Property Brothers stars Jonathan and Drew Scott, Good Bones’ Mina Starsiak and Karen E Laine, Flea Market Flip’s Lara Spencer, and Restored by the Fords siblings Leanne and Steve Ford.

Between takes at a taping, McCormick told People that she was "totally blown away" and felt she was back at Paramount Studios "walking in the front door, getting ready to film a scene." The actor who played Marcia also paid tribute to late cast members Florence Henderson (Carol), Robert Reed (Mike), and Ann B. Davis (Alice), saying she felt their spirits in the renovated living room.

McCormick added that she appreciated being able to have a hands-on role in rebuilding the home. "Hopefully, this place will survive forever," she said, calling the iconic Brady home "a part of history."

As Williams revealed to The Hollywood Reporter in July, there would have been "no show" had all six Brady Bunch actors not agreed to take part in A Very Brady Renovation. He also echoed his onscreen sister's sentiments, sharing with People in Sept. that he "felt like a teenager walking in" as "memories keep flooding in," and that he, too, sensed the presence of his late costars.

"We couldn’t sit at the dining room table without recognizing there are a few people missing," he reminisced in a separate Entertainment Weekly onset interview in Sept. "Standing on those famous stairs to take a photo, you could just feel those who were missing. Even just walking into the front door of the house, we remembered Bob walking in saying, 'Hi honey, I'm home.' I think we all rationalized that they were there with us in their own way."

The fictional home seems to represent more than just a nostalgia piece for the actors. With the upcoming holiday special, they'll have the opportunity to share even more memories, too.

More like this
Tamra Judge & Vicki Gunvalson Gave A Hopeful “Tres Amigas” Update
By Brad Witter
RHOA’s Kenya Moore Said Her Friendship With Marlo Hampton Is “Too Far Gone”
By Brad Witter
The 'Love Island' Contestants *Do* Know Who Gemma's Dad Is, After All
By Maxine Harrison
Jill Zarin Said Her 2011 RHONY Firing “Felt Like A Death”
By Brad Witter
Get Even More From Bustle — Sign Up For The Newsletter