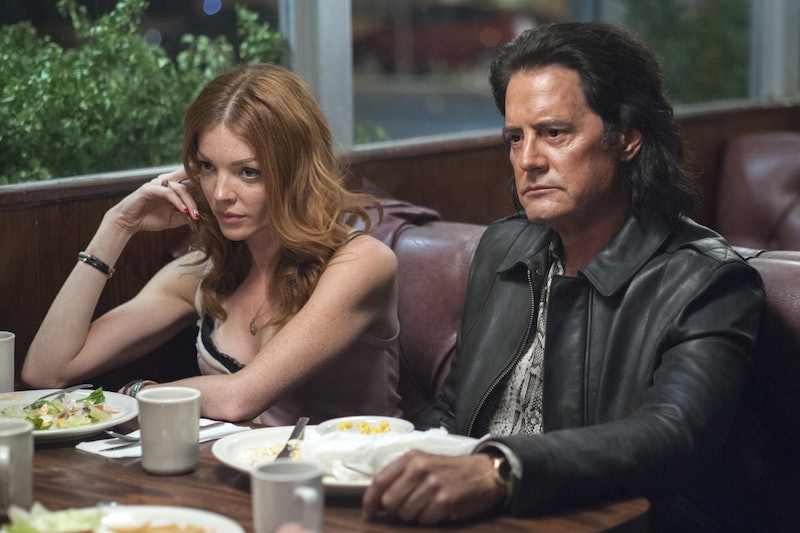 David Lynch's Twin Peaks revival had barely begun when I got the feeling that we really weren't in the old Twin Peaks anymore. One particular major change has me concerned. Lynch and co-showrunner Mark Frost have incorporated female nudity into Twin Peaks that wasn't present when the show originally ran on ABC in the '90s. Now on Showtime, the revival seems to be fully embracing its TV-MA status. This new dynamic not only doesn't fit the tone of the original Twin Peaks, but it's perpetuating unhealthy stereotypes while adding nothing to the story.

The change is obvious in the first episode. A young woman named Tracy strips down for another new character, has sex with him, and then is subsequently killed, in an exceptionally violent manner. In "Part 3," the Dale Cooper doppelgänger that BOB created — Dougie Jones — is with a female sex worker. While Dougie is fully clothed, the woman is completely naked, for an extended period of time. Even if you think that the way Lynch films women is essential to his storytelling, this scene felt wholly gratuitous.

But perhaps the most unnerving moment in The Return so far comes in "Part Two" when evil Dale (BOB-incarnate) murders Daria while she's in her underwear. The scene is prolonged, and I feared for the worst — which I guess in itself is effective — but why does a woman on Twin Peaks have to be naked, or nearly naked, before she dies? Like Liz Shannon Miller wrote for IndieWire, "It's not that men aren't murdered in the show, but as just one example, we don't see Jack, Evil Dale’s male henchman, go through the ordeal that Daria does. Evil Dale plays with his mouth for an uncomfortable period of time, but Jack doesn't die on screen — and he gets to keep his clothes on."

If you're familiar with Lynch's other work — like Blue Velvet, Wild at Heart, and Mulholland Dr. — then you'll know that the director has not shied away from sexualizing female characters and having brutal things happen to them. He consistently showcases the female body as sensual and beautiful, but also as a vessel for men's violent urges. By bringing up Lynch's other projects, I'm not claiming that Lynch is a misogynist.(Lynch actually has a women's health initiative in his transcendental meditation foundation.) Rather, I'm noting that what Lynch is doing in Twin Peaks: The Return is utterly in-character for the auteur. But that doesn't mean that it's in-character for the original Twin Peaks.

Twin Peaks first aired on ABC in 1990 and ran until 1991. The TV landscape was far different then — TV Guidelines were not even created yet. The first two seasons of Twin Peaks did not exhibit graphic violence or copious female nudity. Laura Palmer's corpse was shown, and what happened to her was spoken of, but most of the violence occurring in the town was only discussed.

Knowing Lynch's resume, it doesn't seem likely that Twin Peaks' censorship was an entirely artistic choice, but more a required restraint based on the fact that the show was airing on a basic cable network in 1990. The ABC show couldn't go much further than centering an episode around a beauty pageant or focusing on Donna's lips as she smoked a cigarette when it came to female sexualization.

While Lynch's portrayal of women as sensual yet victimized creatures is a major theme of the original Twin Peaks, its disturbing story lines aren't as difficult to watch as some of the filmmaker's other projects. That's because it was up to the viewer to imagine what Laura Palmer had gone through. (Although, no imagination was needed in the prequel film, Twin Peaks: Fire Walk with Me, which more closely resembles The Return in regard to violence, sex, and female nudity.) Was the show more effective that way? I wouldn't necessarily say that, but I can say that fans didn't need gratuitous evidence of every horror that BOB committed to understand the terror he represented.

As Suzanne Moore for The Guardian wrote in 2015, women being the victims of violence is a major component of Twin Peaks, and that's often overlooked because of the quirky characters and an occasionally playful tone. But the revival of Twin Peaks makes no bones about it — there is an evil that exists in this world that preys on people of both genders, but it's often the women who have it worse. That may be true in the real world as well, but that still doesn't explain why Tracy — a character who viewers will presumably never see again — had to be naked when she died. Lynch's obsession with the female form is at minimum, tiresome, and at worst, problematic. And, as the original Twin Peaks showed, it isn't necessary.

Lynch seems to be proactively addressing hypothetical criticism in "Part 4," when David Duchovny's transgender character Denise criticizes the co-creator's character Gordon Cole for bringing Agent Tammy Preston in on his investigation of Dale Cooper. "Oh, I know your profile, Gordon," Denise says. "Beautiful agent, barely 30." Gordon argues that Tammy is a great agent, and there is merit in Gordon/Lynch's argument that a woman can be both sexy and very capable at her job. But the bit fell flat for me when I reflected on the way that the director has depicted women in the past, and how he continues to do so in The Return.

With only four episodes under its belt, Twin Peaks could redeem itself in its representation of women, but with this track record, I am expecting that there will be plenty of troubling imagery of women being the victims of sexualized violence to come. And while fans of Lynch's vision can't say they are surprised, they can — like me — be sorely disappointed.

More like this
'Friends' Creator Marta Kauffman Opened Up About Misgendering A Guest Character
By Grace Wehniainen
Jesse Tyler Ferguson Had A Funny Run-In With A Fellow ‘Modern Family’ Alum
By Grace Wehniainen
“The Door Is Always Open” For Another 'Breaking Bad' Spin-Off, Says AMC Boss
By El Hunt
Adele Says Postponing Her Las Vegas Residency Was “Brutal”
By Alyssa Lapid
Get Even More From Bustle — Sign Up For The Newsletter