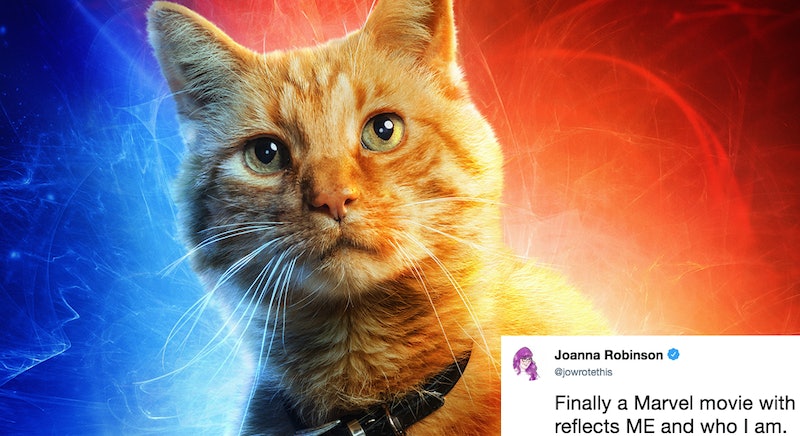 Sure, Brie Larson is the titular star of Captain Marvel, but let's be honest: her cat Goose is the real star. Especially now that the Captain Marvel cat has its own movie poster. Twitter is having a hard time handling it, but, ultimately, fans think it's Thanos that better watch out.

The official Captain Marvel character posters dropped on Wednesday, Jan. 16, and the gang was all there: Larson's Captain Marvel, Jude Law's Starforce Leader, Annette Bening's mystery character, Gemma Chan's Minn-Erva, and of course, Goose, whose poster really is purr-fection. The orange tabby is full-on mugging for the camera because he's a professional. Seriously, Olivia the dog, eat your heart out.

Twitter's real takeaway from this poster, though, was that this cat means business and might be the key to saving the Avengers. "The attention Marvel has been giving to this cat," Twitter user @asshryver_ wrote, "leads me to believe that Goose the cat will defeat Thanos."

Clearly, we've all snapped over this cat since this Goose vs. Thanos angle seemed to be the overall response from most of the internet after seeing this image. "GOOSE WILL DEFEAT THANOS MARK MY WORDS," @napoleneon tweeted in all-caps. Or, to put it as plainly as @CameronDavisson did on Twitter: "Thanos is f***ed."

For others this poster was just a confirmation of what they already assumed. "Goose is already my favorite character in the MCU," user @michellememeit tweeted.

But, it was @science0biatch who seemed to say what everyone was probably already thinking: "This is what Goose deserves." Damn straight.

While this is the first time this super kitty is getting the spotlight to himself, it's not the first time we've seen. Look close at the first official poster for Captain Marvel, out March 8, and you'll find an Easter Egg in the bottom left corner: Goose's back paws.

Goose made they're first official cameo in the second Captain Marvel trailer getting pretty chummy with Nick Fury (Samuel L. Jackson), who is good at a lot of things including head scratches. It was also a sign that Carol Danvers' cat from the comics might play an important role in the movie. Even if they have a different name.

According to Entertainment Weekly, Carol Danvers' cat is named Chewie in the comics, a reference to Star Wars' Chewbacca. But the movie decided to change the cat's name to shout out another movie: Top Gun, which Captain Marvel takes inspiration from.

Of course, in the comics, Chewie isn't really a cat at all. They're actually a Flerken, an alien that just so happens to look like a cat on Earth. An alien, it should be mentioned, that can shoot tentacles out of their mouths, which honestly would come in handy in a battle with Thanos in Avengers: Endgame.

And since everyone knows that no one can come between a girl and her cat, let's assume Goose will be right there with her for the fight of Captain Marvel's life.