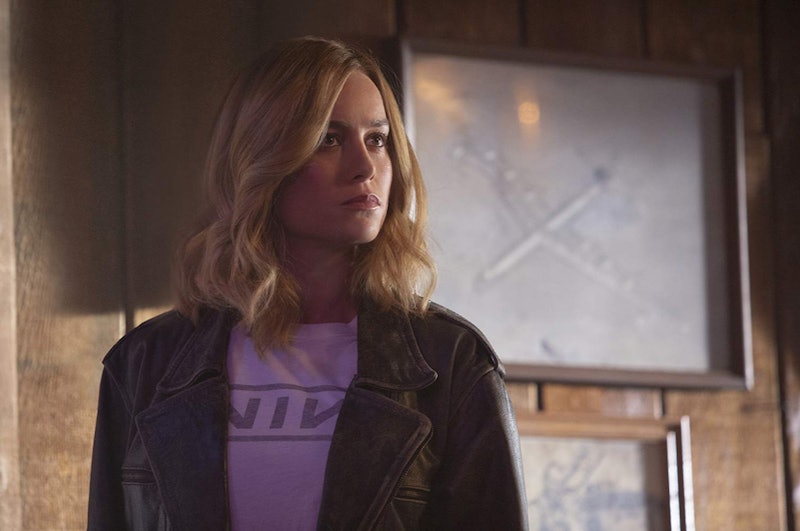 There are some incredible soundtracks that've come out of the Marvel Cinematic Universe. Who can forget Guardians of the Galaxy’s ‘80s mix tapes, or Black Panther’s chart-topping original songs? Captain Marvel, out in theaters now, is set in 1995, which was obviously a great era for music. Women artists in particular were having a moment. Around that time, everyone knew the words to TLC’s “Waterfalls,” and bands like Garbage and Hole had carved out a space for themselves in rock. The Captain Marvel soundtrack has all the girl power of the movie, and it'll seriously take you back. Mild spoilers ahead.

Huge '90s hits pop up in pivotal moments in Captain Marvel: Garbage’s “Only Happy When It Rains" plays when Carol rides a stolen motorcyle out into the desert, and No Doubt’s “I’m Just a Girl" scores a pretty awesome fight scene. You'll also hear Hole’s “Celebrity Skin,” Elastica’s “Connection,” R.E.M.'s "Man on the Moon," Nirvana's "Come As You Are", Des'ree's "You Gotta Be," and the previously mentioned “Waterfalls.” It's a mix of pop hits and grunge songs of the era, and though there's been no announcement of an official Captain Marvel album that brings the them all together, you can easily whip up your own Spotify playlist.

The Captain Marvel soundtrack album that is available for streaming and purchase is the original score, by composer Pinar Toprak, the first woman to score a Marvel film. There are 23 tracks on the album, which will surely inspire your own brand of heroism.

For the movie's co-directors, the music was a hugely important element, right from the start — even before they knew which tracks would make it into the final cut. “We made like a big playlist at the beginning of [filming] the movie and we shared it with the crew and some of the cast and some of those songs are in the movie," co-director Ryan Fleck told Den of Geek. "But it was really just… in post[-production], we put the scenes together and just threw songs in and see what stuck."

Talking with AMC Theaters, co-director Anna Boden discussed what the directors hoped to accomplish with the songs they chose. “We can't compete with Guardians of the Galaxy. [That] was its own special thing,” said Boden. “But we do have a movie that takes place in the ‘90s, and you will hear some ‘90s music, hopefully stuff that reminds you of the past. We're playing a lot with songs that we forgot about or just haven't heard in a long time, but that really bring us back to a certain moment.”

Star Brie Larson told Cinema Blend that music helped her get in touch with her character. “I was listening to a lot of riot grrrl making it, that was kind of my pump-up music, in particular during the fight sequences,” explained the actor. “Listened to a lot of L7 and Bikini Kill in particular.

If you're not quite ready to leave Captain Marvel behind once you leave the theater, you can stay immersed, thanks to the score album and all the classic '90s pop and rock songs that you heard in the movie.