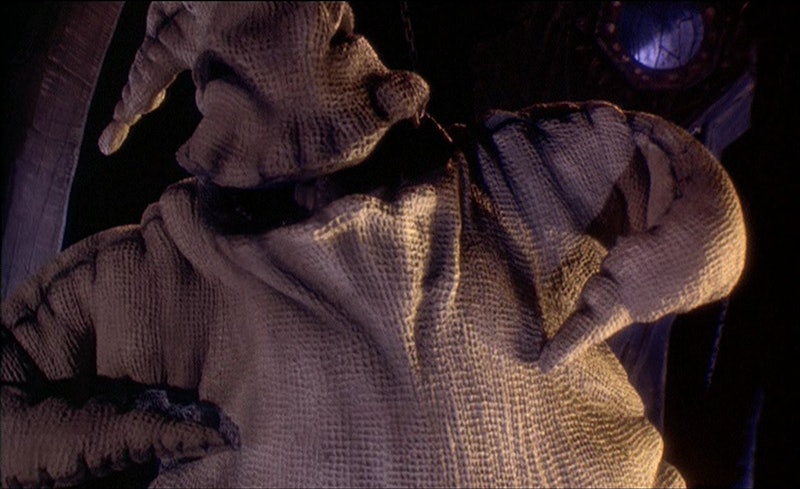 It is a truth universally acknowledged that the Halloween season is the best season — and this year, it also seems to be the Season of the Spooky Secret Menu Starbucks Drink. For example, I have just learned how to order an “Oogie Boogie” Frappuccino at Starbucks — an off-menu Frapp made possible thanks to the Starbucks menu’s absurd degree of customizability. I mean, hey, we’ve already learned how to order an IT Frappuccino, a Jack Skellington Frappuccino, a Great Pumpkin Latte, and a Cinderella Latte this season — all of which are similarly “secret menu” drinks invented by Starbucks fans and skilled baristas — so we may as well add another to the mix, right?

This latest creation comes to us from writer Amanda Moring of the website Totally The Bomb, who worked with a barista at her local Starbucks store to bring this Nightmare Before Christmas-inspired treat to life. It mimics Oogie’s color palette towards the end of the film, when he’s lit up green in his, uh… I guess I’d call it a chamber of horrors? I mean, to be fair, it’s pretty remarkable that, on top of his whole lair situation, the bug-filled sack dude also has a room inside said lair specifically for fun and games and torture. Regardless, though, a combination of white chocolate mocha and Frappuccino chips lends a sweet crunch to the drink, while a dusting of matcha powder on top turns the whole thing Ooogie’s blacklight-fueled green tint.

A couple of caveats about the Oogie Boogie Frappuccino, though: First, the recipe is a little complicated, so you may have to walk your barista through it, step by step. Also, speaking of your barista, have patience with them; you are, after all, ordering something that’s both complex and off-menu, so it might take a little bit of time for them to comprehend and execute the huge list of instructions involved in ordering an Oogie Boogie Frapp. Third, if you’re going to order a drink of this magnitude, do it when the store is relatively quiet (please don’t be that person who holds up a massive line of customers all trying to get caffeinated by ordering a drink that takes a zillion years to make). And lastly, you might have a hard time ordering this one from the app or online — the customization menus are pretty prescriptive and don’t allow for the same degree of creativity you get working directly with a barista in the store.

So! With all that said, how exactly does one go about ordering an Oogie Boogie Frapp? After all, you can’t just roll up to your average Starbucks and ask for it by name; because it isn’t on the official Starbucks menu, baristas aren’t trained in how to make it and will likely have no idea what you’re talking about if you just say, “Hi, I’d like a Grande Oogie Boogie Frappuccino, thanks.” Here’s how to make the customizations and adjustments to your order that will allow you to experience the glory of an Oogie Frapp:

As always, your options include Tall, Grande, and Venti; a Tall is 12 ounces, a Grande is 16 ounces, and a Venti is 24 ounces. Alas, as I discovered when looking into how to order the IT Frappuccino, you cannot order a Short or Trenta Frappuccino. (Short cold cups don’t exist, while Starbucks just… won’t sell you a Trenta Frapp.)

4. Ask For Whipped Cream In The Bottom Of The Cup

A number of specialty Frappuccinos start with something added to the cup before the Frapp itself gets poured in — the beloved S’mores Frappuccino, for example, starts with both marshmallow-infused whipped cream and chocolate sauce layered on the bottom of the cup — so this instruction should be familiar to seasoned baristas.

5. Ask For Frappuccino Chips In The Bottom Of The Cup

The chips go on top of the whipped cream, before the Frapp gets poured in.

Is a Frapp really a Frapp without the whip?

The matcha powder goes on top of the whipped cream.

Again, have patience, go slowly, and be prepared to walk your barista through each step as they make the drink. There’s… a lot going on here.

Once you’ve gotten your treat, though, feel free to head home, cue up The Nightmare Before Christmas, and revel in all things spooky and delicious. Happy Halloween season!