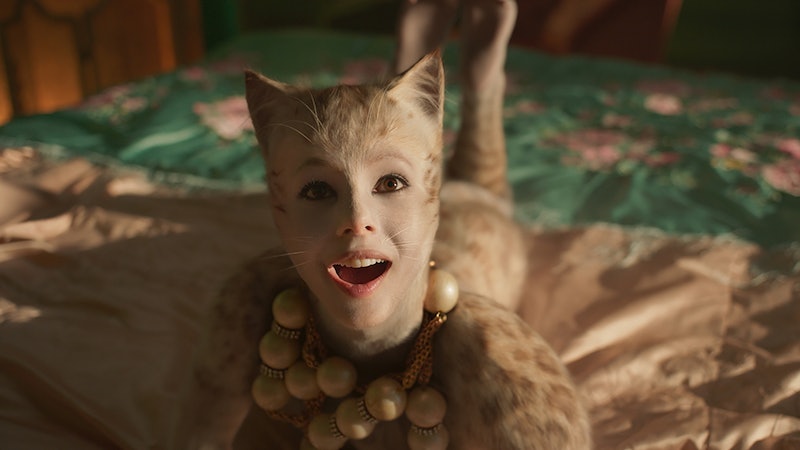 When the first trailer arrived for the Cats movie adaptation, the internet couldn't stop talking about the utterly uncanny use of "digital fur technology" on the actors. But strange aesthetics aside, there are plenty of reasons fans of the musical will still be interested in the movie — after all, Cats the musical didn't become one of the longest running shows in Broadway history because of its special effects, but because of its stellar music. So will the Cats movie soundtrack end up being the film's saving grace, or has it, too, been altered almost beyond recognition?

The film's cast certainly suggests the soundtrack will be a stellar listening experience. Among the stars of the film are music superstars Taylor Swift, Jason Derulo, and Jennifer Hudson, who performs a stellar rendition of the classic song "Memory." Also contributing are a few musically inclined actors like James Corden, Idris Elba, Judi Dench, and others. As for the songs on the soundtrack, it's mostly the familiar songs from the original musical along with a couple of new additions written specifically for the film. Of the new additions, one is called "Magical Gus," and at only 36 seconds long, it's likely a spoken word intro by actor Ian McKellen, as it directly precedes his song "Gus: The Theatre Cat," which is from the original musical. However, the other original track, "Beautiful Ghosts," is far more interesting.

"Beautiful Ghosts" was composed specifically for the movie by Swift and Andrew Lloyd Webber, who wrote the stage musical and all of its music. The song is such a big deal for the film — it's nominated for a Best Original Song Golden Globe — that it's actually featured twice in the film. The first instance of it is sung by ballerina Francesca Hayward, who is making her film debut in Cats as the lead character Victoria. The second performance of the song is by Swift herself, who sings it over the film's closing credits. Swift's version has been released as a single, and both versions show up on the soundtrack. You can take a look at where they fit in among the full track list below.

The Cats soundtrack, which is officially titled Cats: Highlights from the Motion Picture Soundtrack, will be released both digitally and on CD on Dec. 20 — the same day the film hits theaters. But unlike the movie, the soundtrack is 100% digital fur-free!

More like this
Zach Gilford Admits He Forgot Taylor Swift's Name When He Starred In Her Music Video
By Jake Viswanath
The Ticketmaster Senate Hearing & Taylor Swift Tickets Debacle, Explained
By Jake Viswanath
Taylor Swift Visited The 'Glee' Set For This Bizarre Season 5 Episode
By Grace Wehniainen
Taylor Swift May Miss The 2023 Grammys For Reasons Fans Know “All Too Well”
By Jake Viswanath
Get Even More From Bustle — Sign Up For The Newsletter
From hair trends to relationship advice, our daily newsletter has everything you need to sound like a person who’s on TikTok, even if you aren’t.