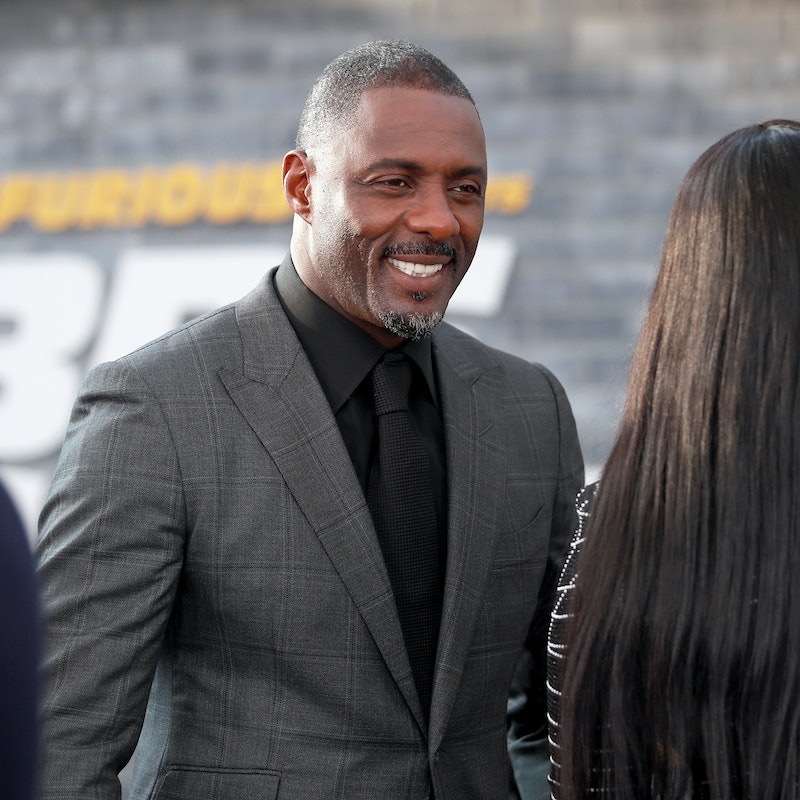 Social media hasn't been able to stop talking about the recently released Cats trailer since it hit the Internet last week, and now, the film's cast are weighing in as well. Idris Elba's reaction to the Cats trailer will change the way you see the film, and make you want to know a lot more about his "naughty cat" character.

The Hobbs & Shaw actor was recently asked about his first impression of the live-action Cats trailer during a conversation with Entertainment Tonight Canada. And while his first answer was a joke — "Rowr, that's my reaction," Elba said, holding up cat paws — he couldn't help but gush about how impressed he was by his first look at movie. "Tom Hooper [the director], had this vision for Cats to take it off the stage — it's incredible on the stage — and to [bring it] to the cinema scope, and I'm so proud to be a part of it," Elba said. "Moviemaking is incredible at the moment, [with] the magic we can do."

In addition to praising the way Hooper translated the stage show onto the big screen, Elba also offered up a little more information about his mysterious Cats character. "I'm playing Macavity. He's a poor guy, Macavity, but he's a bit of a naughty cat," Elba said. "I'm excited for people to see him." Based on the way fans reacted to Elba's appearance in the trailer, it appears as if the feeling is mutual.

In the August issue of Vanity Fair, Elba talked a bit more about the "mystery cat," revealing that he based a lot of his performance on Jack Nicholson. "The myth is that cats have nine lives, and [Macavity] has one left. So he’s desperate to be acknowledged, and he’s slightly unhinged, and he’s obviously met death a few times and gotten past it," Elba said. "The character has complexities, and I think that Tom Hooper ... wanted someone who could pull off that stuff — meanwhile singing and dancing and meowing."

In the piece, Hooper also revealed that Elba confessed to him that he had always wanted to be in a musical, but there was one major hangup that kept him from pursuing that dream. "I’m not a 'singer,'" Elba told VF. "I’ve made music with singing. I’m musical, I’m an actor. I’ve never done it before, so I thought, 'Why not?'"

His role in Cats is allowing Elba to pursue multiple dreams at the same time — in addition to finally getting to star in a musical, the actor gets to work with Taylor Swift — who plays Bomburalina — after wanting to collaborate with the pop star for a long time. "This year's been amazing, because I get to play and make music a lot more and I'm hoping that...I might get Taylor and I to do a song. I mean, that would be great," Elba told Access Hollywood at the Golden Globe Awards in January.

Sure, the prospect of seeing Elba and Swift dancing their way through the Jellicle Ball is exciting, but it seems like the Cats movie is just the beginning of a new chapter in Elba's career. And, just maybe, the start of an unexpected musical pairing.