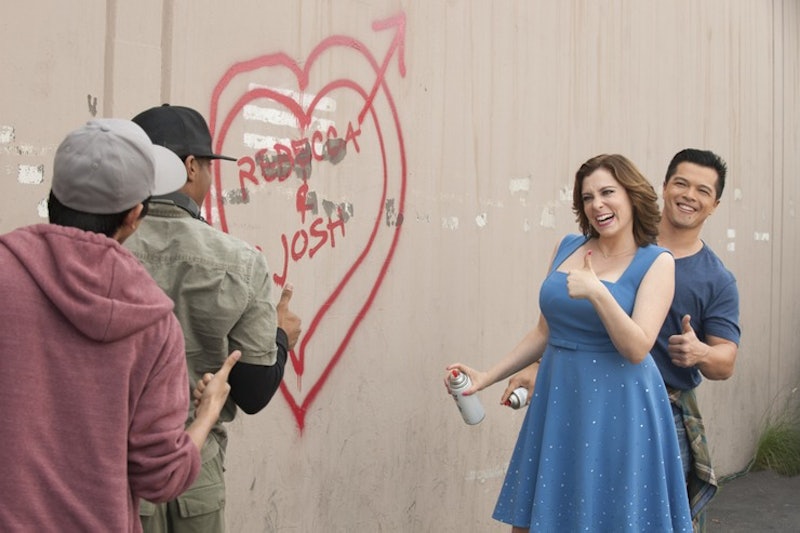 The one thing that had been alluded to during the entirety of Crazy Ex-Girlfriend Season 2 was Rebecca's issues. The psychological and emotional turmoil she has been mired in since we first met her way back in Season 1 basically consumed her in the Season 2 finale. While Rebecca was imploding on the inside, we, the audience, we treated to a series of flashbacks that completed the fragmented picture we've had of Rebecca's life before she came to West Covina. We always knew there was something slightly off about Rebecca, but now we know that the past was much darker than we expected.

Blame Rebecca's dad. Blame Robert. Heck, you could give a little blame to Josh. But Rebecca's biggest underlying issue, the one consistently referenced in the Season 2 opening song: she has abandonment issues in regards to the men in her life stemming from her father leaving her when she was a child. This, we found out, has caused a dangerous pattern in her life, where she has sought the unconditional and binding love of any man she has set her sights on.

Rebecca's calm, collected façade started to break apart when Nathaniel flew her father in for her wedding. Being reunited with her dad, the one man she has always sought the love and approval of, sent her into a frenzy wherein she wanted nothing but to make up for lost time.

She wanted to create the perfect father-daughter dance, she sent him weird text messages about getting coffee, and she even showed up at his hotel room with years of Father's Day cards stockpiled and the desperate apology that she was sorry for being clingy and a hope they could start fresh. Her dad, while saying anything to please her, just wanted her money.

We then learned the truth about this Robert fellow Rebecca was unconsciously talking about. Before Rebecca went to Yale, she was at Harvard. She was having an affair with her married professor, who declared he wouldn't leave his wife for Rebecca. Rebecca proceeded to light his clothes on fire and her mother pleaded in court on her behalf, despite Rebecca being adamant that she "has no underlying issues to address," as she told the judge.

To avoid any real jail time, she was institutionalized. We learned that Rebecca's songs were part of her delusions, but that people could actually hear her singing them. We've seen slight acknowledgements from other characters in previous episodes about Rebecca's singing, but this major narrative device in the show (the songs) was confirmed to be a real manifestation of Rebecca's bigger problems.

The stress of the wedding, the reunion with her dad, and Josh's abandonment ultimately broke Rebecca. But, rather annoyingly, instead of actually sitting down with Paula or her therapist to really discuss these issues — a thing which has needed to happen since Day 1 on this show — Rebecca vowed to get revenge on Josh.

So, while we finally got better insight into Rebecca's problems and just how deeply they've taken root in her psyche, we got very little indication that Rebecca was committed to getting over her issues in a healthy fashion. Perhaps this is Rebecca's great burden but I sincerely hope that, in Season 3, we get a storyline that show's Rebecca on the road to recovery rather than the path of destruction.