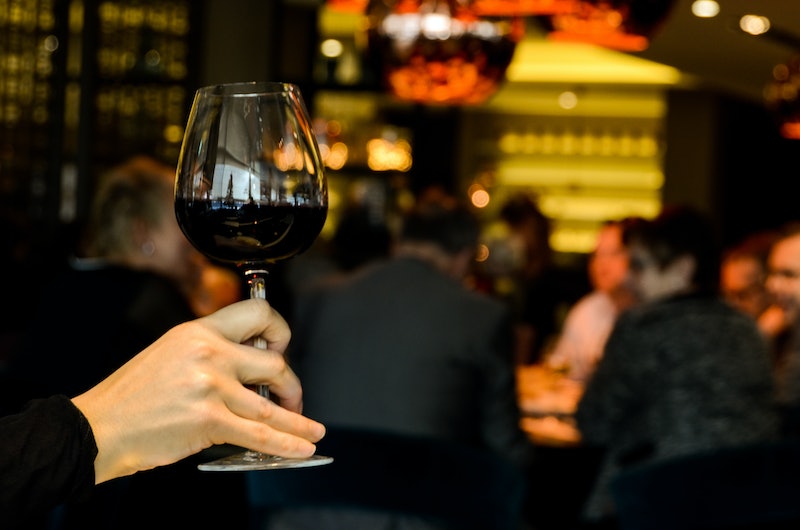 Last year, the Centers for Disease Control and Prevention (CDC) released recommendations stating that women should not drink alcohol while they are or could get pregnant in attempt to prevent fetal alcohol spectrum disorders. But according to a new study, the CDC's alcohol and pregnancy guidelines may have underestimated women's ability to make their own choices. Anecdotally, this was already apparent in the backlash that occurred when the guidelines were initially released — but now we've got empirical proof that rather than actually helping women, the guidelines may be yet another example of the government needlessly trying to dictate what they do with their bodies.

The guidelines suggest that sexually active women don't drink unless they're on effective birth control, since there's a chance they could have an unplanned pregnancy. That's problematic for a number of reasons. First of all, people should be allowed to decide for themselves whether they want to risk experiencing complications with a pregnancy, and if they do, it's their choice whether or not to carry that pregnancy to term. Secondly, women may not need guidelines to make smart decisions. The new study, published in Obstetrics and Gynecology, suggests that they're already thoughtful about their alcohol consumption while pregnant.

Katherine Hartmann, deputy director of the Institute for Medicine and Public Health at Vanderbilt University, surveyed 5,036 women on their drinking habits during pregnancy. 90 percent stopped drinking when they became aware of their pregnancies. Among the remaining 10 percent, most drank less than once a week. Although over half of pregnant women drank during their first trimesters, those who had planned their pregnancies were 31 percent less likely to drink around conception or early pregnancy.

Those who continued drinking while pregnant were disproportionately white, college-educated, older, and more financially well-off, contrary to stereotypes that low-income women or women of color are more likely to drink while pregnant.

"I take heart that this data tells me women are aware of their bodies," Hartmann told Mashable. "They are making good decisions. ... We just found it so heartening that behavior immediately changed." Rather than tell any woman who could get pregnant not to drink, Hartmann believes the government would be better off informing those planning a pregnancy of the potential consequences of drinking, encouraging early pregnancy tests so that those who don't want to drink while pregnant can stop immediately, encouraging people to use birth control, and making birth control more accessible (rather than, you know, continuing to make it harder and harder for people to get birth control).

New York City, which has a law prohibiting bars and other establishments from denying someone a drink because they're pregnant, may be on to something. While the American Academy of Pediatrics says it's best to avoid alcohol while pregnant, it's still up to each of us to decide which health guidelines we're going to follow — and apparently we are perfectly capable of making those decisions for ourselves. Who knew? (Answer: Everyone. Everyone knew.)

This study's implications could also extend beyond the issue of drinking while pregnant. The CDC's distrust of pregnant women reflects an overall distrust of women in our society that's also used to justify the limiting of abortion rights and other patronizing legislation and guidelines. The new findings serve as an important reminder that women for the most part think hard about how they treat their bodies and don't need the government to tell them what to do.

More like this
Black Women's Equal Pay Day Highlights An Upsetting Problem
By Brandi Neal
10 Ways To Be More Empathetic To Your Partner
By Raven Ishak and Lexi Inks
Think Your Partner Is Cheating? These Tarot Cards May Confirm Your Suspicions
By Kristine Fellizar
The 19 Best Tweets & Memes About Bisexual Awareness Week
By Lexi Inks
Get Even More From Bustle — Sign Up For The Newsletter