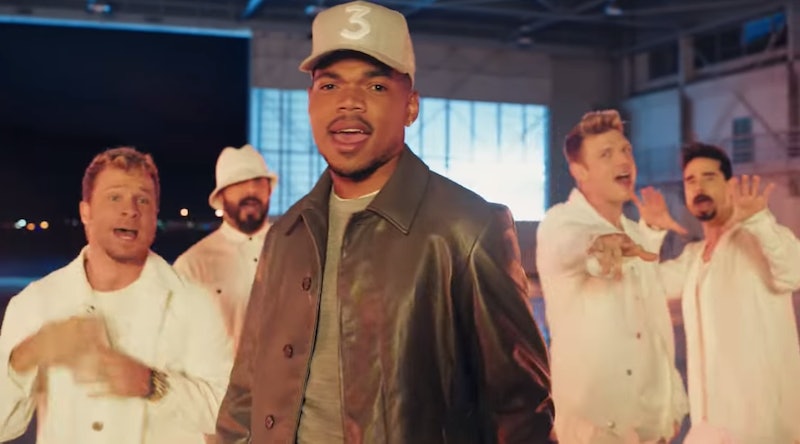 Chicago musician Chance the Rapper teamed up with the Backstreet Boys for a Super Bowl ad, which included a remix of the boy band's classic song, "I Want It That Way." AJ McLean, Howie Dorough, Nick Carter, Kevin Richardson, and Brian Littrell joined forces with the hip-hop artist in an epic video to promote Doritos' new flavor, Flamin’ Hot Nacho. And they did such a good job that Chance the Rapper's Doritos commercial had fans wishing he'd release the track for real.

The video featured Chance racing cars across the desert and rapping a verse about the new flavor (the lyrics are pretty incredible) before uniting with the Backstreet Boys — all five of whom were in their signature all-white outfits. And the "No Problem" singer held his own as he performed their '90s dance moves, clad in his iconic baseball cap and clearly having a great time. It seems like a bizarre combination of musicians, but it worked surprisingly well. And fans were excited to see the beloved boy band and current favorite rapper join forces on such a classic song — updated for 2019 with Chance's rap verse about delicious, spicy chips.

The collab was first teased last week, with a clip of the BSB trying (and failing) to teach Chance to dance like them. However, it seems like their dance lessons paid off, since his dance moves in the music video are larger than life. What's more, it looks like Twitter was on board with the two musical groups joining forces, and the commercial ended up being the highlight of many Super Bowl viewers' nights.

In fact, some fans expressed that they wished the Backstreet Boys and Chance the Rapper were taking the stage during the halftime show instead of Maroon 5, who received a tepid response for their performance. Perhaps in 2020?

And although fans can watch the "Flamin' Hot Remix" on YouTube, it doesn't look like the song is available to stream. That said, BSB just released their new album, DNA, on Jan. 25. According to Billboard, this was the group's first number one album in nearly 20 years (Black & Blue topped the list all the way back in 2000, per the same report). So although this Doritos commercial is an exciting appearance for the band, this was by no means the highlight of what promises to be a huge year for the group.

Furthermore, Chance released two singles — "The Man Who Has Everything" and "My Own Thing" — in late 2018, after the critically acclaimed Coloring Book in 2016. But who knows — maybe Chance and BSB will have mercy on their fans and release the "Flamin' Hot Remix" collaboration as a single, since fans really want it that way.

Whatever the case, it was still a fun commercial for Doritos, Flamin' Hot Cheetos, Backstreet Boys, and Chance the Rapper fans alike, even if it was just a one-time thing. But if the two groups were to drop the song, fans likely wouldn't complain.