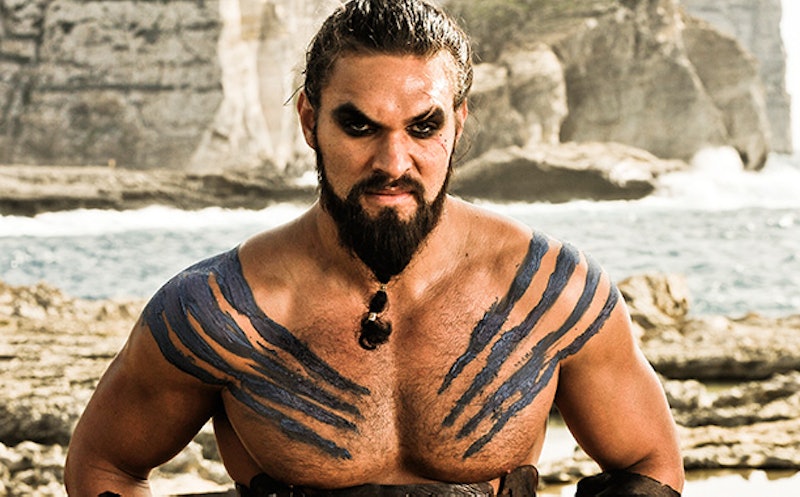 As much as I would like Daenerys to be the Queen Elizabeth I of Westeros and refuse to marry into an alliance, the chances are high that she will wed again on Game of Thrones. What if, instead of a Greyjoy, a Lannister, or even her own cousin, Daenerys ended up with her one true love again? If Khal Drogo returns for Game of Thrones Season 7, that would be quite a twist.

How could Dany's first husband return in the story? The witch gave her a possibility wrapped in a riddle way back in Season 1. According to her, Drogo will return "When the sun rises in the west and sets in the east. When the seas go dry and mountains blow in the wind like leaves. When your womb quickens again, and you bear a living child." Why even mention that prophecy if it was never going to come true? As they say on Twitter, just let that sink in.

Possibly the "sun" refers to a son, like Jon Snow. Possibly it refers to Daenerys' dragons. It could be someone from Dorne, whose sigil is the Sun. All of them could rise in the West, meaning Westeros. Leave Essos out of this. The seas could go dry with dragon fire, or be turned to ice. There is a character called the Mountain. All of these bits and pieces of the prophecy can be interpreted in multiple ways. Maybe Drogo was the real Azor Ahai all along? Who knows.

Before we all yell "ALOHA DROGO" simultaneously, let's look at the evidence. Game of Thrones is effectively shady about upcoming twists and surprise returns. On one hand, Momoa has been busy filming Justice League and, subsequently, the Aquaman solo film. Even if Game of Thrones wanted Drogo for a flashback, the scheduling would be a nightmare.

But then, there are the Instagrams.

This was taken in September. I can barely move past the part where Momoa calls the bespecled Jon Snow actor "my Kit" in the caption, but you do have to wonder where they are and why they were hanging out.

There's also this one, taken a month earlier with the Thrones writers.

Curiouser and curiouser. Here's one more for the road, from June of last year, proving that the actor spent pretty much his entire summer hanging with the Thrones folk.

One would think that, if Momoa was really returning to Game of Thrones, he wouldn't be so open about it on social media. However, maybe he's just outgoing and unassuming enough to pull it off. Drogo's return doesn't have to be a resurrection. He appeared in a fantasy sequence at the end of Season 2. I'm just saying, you never know...