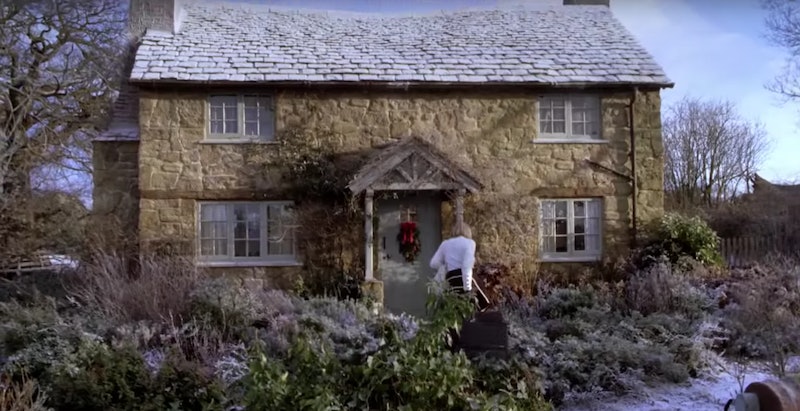 Whether it's Harry Potter or Love Actually, it's most people's dream to live in a house that once played host to a much-loved film. Well, here's your chance, because the cottage from The Holiday is up for sale. OK, so it's not the actual adorable Surrey house, but it is the cute cottage that inspired the 2006 film's English abode.

The three-bedroom property, which goes by the charming name of Honeysuckle Cottage, is currently up for sale for the grand old price of £650,000. Situated in the small Surrey village of Holmbury St Mary, it is the quintessential picture of an English home. And according to Homes and Property, The Holiday's production crew were so inspired by the look of the cottage that they decided to build another version of it in nearby Shere.

If you need a little reminding of where the cottage pops up in the cinematic masterpiece, it is the home that Cameron Diaz's character, Amanda, stays in when she swaps places with Kate Winslet's Iris. Of course, the pair then fall in love with local men. For English Iris, it's a man played by Jack Black. For Californian Amanda, it's the one and only Jude Law.

Honeysuckle Cottage sounds positively delightful if you're looking for a change of scenery. As well as featuring three bedrooms, the house has a family/dining room, living room, bespoke kitchen, larder, and bathroom. Estate agents Hamptons describes it as "a stunning extended period cottage" that has kept many of its original character features including an inglenook fireplace with a Jotul log burner. You'll probably have to Google those to fully understand what that means.

The cottage's kitchen contains an oil-fired AGA cooker while the entire ground floor has cosy underfloor heating. Perfect for a freezing winter morning. And if you've never enjoyed a garden with a lovely view, or even a garden for that matter, you're in luck. The property comes with a fully landscaped garden and a flagstone terrace so you can enjoy a few drinks on those rare sunny days.

Holmbury St Mary is a particularly small village. You'll have to travel to another nearby village to find an everyday shop and a farm shop for authentic countryside produce. The good part is that you can easily travel to London by train or car if you need to. Both journeys will take around an hour.

Those with a real love for The Holiday can travel to Shere too, the place where the film's actual cottage was built and the location of scenes from other films including Bridget Jones: The Edge of Reason and Four Weddings and a Funeral.

The Holiday isn't the only romcom hitting headlines recently. Julia Roberts' and Hugh Grant's 1999 drama is enjoying a renaissance. As the film prepares to celebrate its 20th anniversary next year, the owners of the famous Notting Hill Bookshop (otherwise known as The Travel Book Co) are preparing to witness a shedload of extra romantic proposals in the coming months.

The UK may be small but it has more than its fair share of memorable movie locations, especially if you're a fan of those slushy '00s productions.