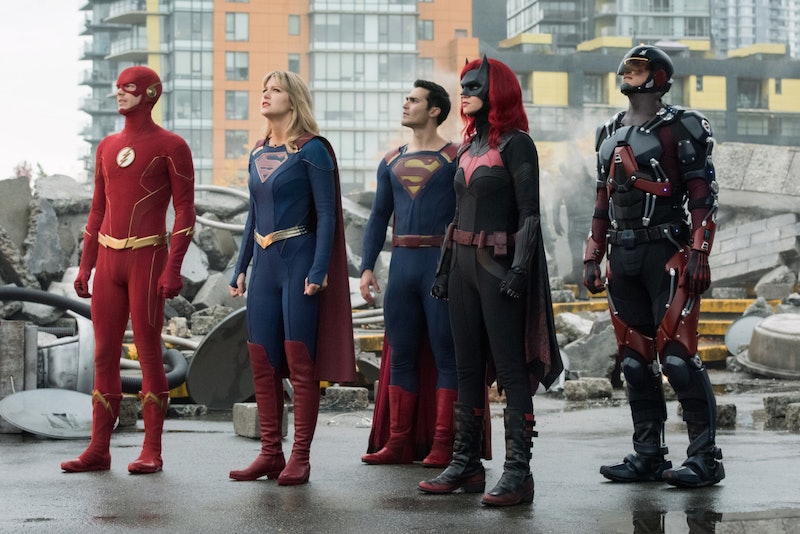 Spoilers ahead for Crisis On Infinite Earths: Part 1. The epic "Crisis on Infinite Earths" Arrowverse crossover is here, and fans were delighted to see several surprise cameos within its opening moments. Not only did the episode show glimpses of iconic and former DC Comics actors living on other Earths, it also acknowledged a connection to Titans, which just wrapped its second season on DC Universe. Below, let's break down the "Crisis on Infinite Earths" cameos — and whether this means we'll see some Arrowverse characters cross over into Titans next year.

The most exciting cameos are the (all too brief) shots of Jason Todd (Curran Walters) and Hank Hall (Alan Ritchson) from Titans. They're both shown in San Francisco on Earth-9 as the Antimatter wave colors the skies. Unfortunately, it's just a quick shot, and it looks like their Earth didn't fare too well.

It's a surprising reference regardless, as months ago it was reported, and then debunked, that maybe the Titans would show up in the crossover. Though it's likely a much smaller cameo than fans were hoping for, it still opens the door for future crossovers between the CW and the DC Universe streaming platform. With Titans Season 3 slated for next year, there's at least an opportunity for an Arrowverse character to show up, now that we know the creative teams are in communication.

Fans also spotted Burt Ward, who played Robin in the whimsical 1966 Batman TV series. He's shown in a red, yellow, and green sweater — a reference to his old Robin costume. Amusingly, his earth is called Earth-66.

Robert Wuhl played Alexander Knox in Tim Burton's 1989 Batman, and in "Crisis" he cameoed in the scene where he's turning on the Batsignal, hoping that Batman shows up before the wave consumes them.

Tovey appears briefly on Earth-X as Ray Terrill, clad in his iconic gold helmet. Tovey voiced The Ray in the animated Freedom Fighters and played the live-action version of The Ray across several Arrowverse shows.

Wil Wheaton is a geek culture mainstay, and most recently he voiced Aqualad in Teen Titans Go! In the crossover, he appears as the angry protestor that Kara has to save.

Keep your eyes peeled for more cameos as Crisis On Infinite Earths continues.