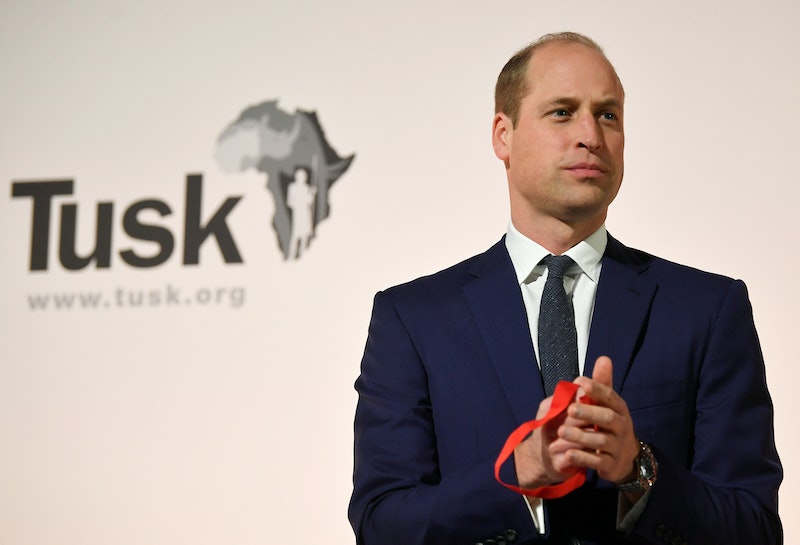 Prince William, Duke of Cambridge, will make his Crown debut in Season 4, but not quite in the way you might imagine. According to Entertainment Tonight, Netflix's hit drama was spotted filming Prince Charles and Princess Diana's 1983 royal tour of Australia, featuring an infant actor as Prince William, supposedly to be featured in The Crown Season 4. The outlet reported that Josh O'Connor and Emma Corrin were spotted filming a scene in which Charles and Diana disembark a plane while holding their young son, as well as shots in which baby William is held by his nanny on the steps of the plane. (Bustle reached out to Netflix for confirmation, but did not receive an immediate response.)

It seems that the 1983 Royal Tour will play a significant role in Season 4, as O'Connor and Corin were spotted in Almería, Spain, back in October reportedly filming Charles and Diana's visit to Ayers Rock (which is now known as Uluru). Per Town and Country, the Australian voyage was Prince William's first tour, as Diana reportedly refused to leave the then-nine-month-old at home. Her decision marked a major change in royal protocol, as up until that trip, it was tradition for the Royal Family to travel abroad without the little ones, who would be left in the care of nannies and relatives.

While Corrin did not appear in Season 3 of The Crown, the upcoming season will likely include Diana's journey from young aristocrat to the "People's Princess," as well as the love triangle between her, Charles and Camilla Parker-Bowles (Emerald Fennell). The most recent episodes, which chronicled the years 1964 through 1977, featured the Prince of Wales falling in love with Camilla, before the pair were pulled apart because Charles needing to marry someone more "fitting." Season 3 ended with Queen Elizabeth (Olivia Colman)'s Silver Jubilee, just a few months before Charles met Diana, who was just 16 at the time.

In a November interview with Entertainment Tonight, O'Connor revealed that the love triangle will play a major role in Charles' storylines and development as The Crown moves forward. "What’s interesting is it’s kind of echoing the same stuff that happened in Season 1 with Vanessa Kirby’s character, Margaret," O’Connor said, referencing the late princess' doomed romance with Peter Townsend (Ben Miles). "Again, you know, you can kind of see the echoes of those series" in the upcoming episodes.

Meanwhile, despite reportedly playing a minor role in Season 4 — and potentially a much bigger role as the show goes on — it's unlikely that the real Prince William will actually tune into The Crown to see how his parent's 1983 tour is portrayed. While appearing on The Graham Norton Show in November, Colman revealed that she asked him if he watched The Crown during an "awkward" meeting at Buckingham Palace. Though he was apparently "very charming and very lovely," to Colman, his answer was a "very firm no."

Whether or not Season 4 of The Crown earns a seal of approval from Prince William, it's clear that the duke's very first Royal Tour will play an important role in sharing a new side of his parents' story with fans.

More like this
'The Crown' Season 6 Has Suspended Filming "Out Of Respect" For The Queen's Death
By Bustle Staff
Ashton Kutcher Wants Danny Masterson “To Be Found Innocent” In Rape Retrial
By Jake Viswanath
'The Queen’s Gambit' Season 2 Tweet Wasn’t From Anya Taylor-Joy
By Mary Kate McGrath, Jack Irvin and Grace Wehniainen
Here’s Everything Coming To & Leaving Netflix In February
By Jake Viswanath
Get Even More From Bustle — Sign Up For The Newsletter
From hair trends to relationship advice, our daily newsletter has everything you need to sound like a person who’s on TikTok, even if you aren’t.