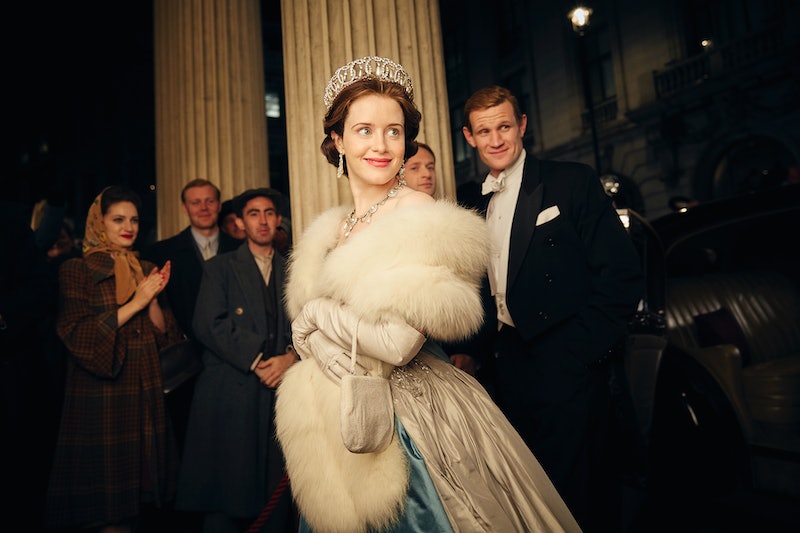 Imagining Queen Elizabeth sipping tea with a corgi in her lap as she browses Netflix is one of my absolute favorite mental images. I have no idea if it actually happens or not, but ever since a "senior royal source" claimed to the Daily Express the Queen has seen The Crown (and is reportedly a fan), the idea has made me happy. Not everyone is quite so ecstatic about the news, though. According to The Hollywood Reporter, The Crown creator, Peter Morgan, hopes the monarch hasn't actually seen the show, and he has an excellent reason for feeling that way. He told THR,

"In my own heart of hearts, I sort of want to pretend that she hasn't watched, and I hope she never does because then I can say, "I don't know." Not knowing is the best way. I want them to have that privacy, and I want us to have our privacy, and I don't want to feel that I'm writing this at all to get their approval. I don't want them to feel disappointed. I think it's good when both sides have their independence."

Creating a series about a living person is already a risky gambit, having to deal with the idea that they're watching you adapt their life has to be terrifying. It's no wonder Morgan would rather not think about Queen Elizabeth watching his series. As amazing as the show is, it's still her life, and he has to feel a certain amount of pressure to do right by his subject — and that's without imagining her marathoning the show with her loved ones. (Bustle reached out to Buckingham Palace when news first broke that the Queen may watch, but did not receive a response.)

In order to make the best show he possibly can, Morgan has to focus on the history of this amazing woman's reign. I suspect thinking about her actually watching the series would rattle even the most confident of writers' nerves. She is still the Queen of England, after all. Unlike most period dramas, this is a show where the historical stars are still in a position to critique any inaccuracies to their stories.

Even the show's star, Claire Foy, is skeptical the the Queen has seen The Crown — however, she's less apprehensive about the idea than Morgan. She told Vanity Fair that while she would love to know what the monarch thought about the historical aspects of the show, like the coronation, she still finds the prospect of Queen Elizabeth actually watching the show strange. Foy said,

"The personal level of it, and seeing someone else act out your life, and act out your most painful moments of grief, or happiness, or fear, or triumph, or whatever, I don't think would be a very enjoyable thing, which is why I doubt very much that she's watched it."

I see Foy's point, but if history and The Crown have taught the world anything about this royal woman, it's that she's made of stronger stuff than most. If anyone could actually sit through their own biopic, it's probably her.

The world may never know whether or not Queen Elizabeth has watched Netflix's royal series for sure. It's certainly a tantalizing prospect, but no one can blame Morgan from hoping his muse is much too busy leading the United Kingdom to tune into his show.